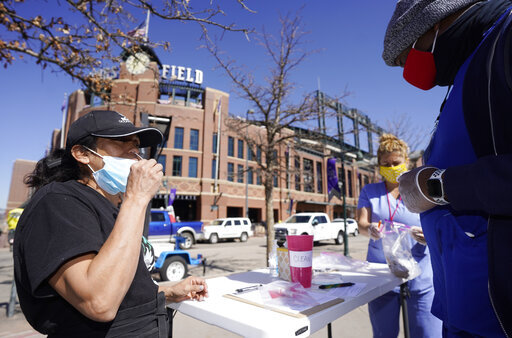 Martha Bravo, left, self-administers a swab COVID-19 test under the guidance of Josh Copeland at a table set up outside the main gate of Coors Field as fans return for the first time to the ballpark for a baseball game between the Los Angeles Dodgers and the Colorado Rockies Thursday, April 1, 2021, in Denver. Community Wellness of America was offering the service to fans as they entered the ballpark. (AP Photo/David Zalubowski)

Major League Baseball swiftly moved the All-Star Game to hitter-friendly Coors Field on Tuesday after pulling the Midsummer Classic from Atlanta over objections to extensive changes to Georgia’s voting laws.

Coors Field last hosted the All-Star Game in 1998. The game will be held July 13.

“We appreciate their flexibility and enthusiasm to deliver a first-class event for our game and the region,” MLB Commissioner Rob Manfred said in a statement. “We look forward to celebrating our sport’s best players and entertaining fans around the world.”

MLB decided to move the game from Truist Park in Atlanta in response to Georgia voting changes signed into law by Republican Gov. Brian Kemp on March 25. Critics, including the CEOs of Atlanta-based Delta Air Lines and Coca-Cola, have condemned the changes as being too restrictive.

The Georgia laws includes new limits on voting by mail and greater legislative control over how elections are run, amid a push in Republican-led states to reduce voting options after former president Donald Trump made baseless claims of widespread fraud in last year’s election.

Democratic state officials in Colorado have touted their state's mail-in voting system, which began in 2013, for its ease and accessibility. In the November election, there were more than 350 ballot drop boxes around the state along with a ballot tracking system that allowed voters to trace their votes as they were accepted and counted.

Colorado Secretary of State Jena Griswold praised the MLB decision, crediting it to the state’s “national gold standard for elections.”

“We’ve got the most accessible and secure elections in the country, and are grateful that MLB is giving us the opportunity to showcase how elections can be!” Griswold said in a statement.

Colorado Gov. Jared Polis said at a news conference that the state had expressed interest in hosting a game down the road, but when given the last-minute opportunity, Denver was able to make plans quickly. They already had a blueprint for handling hotels, event space and security.

“This is fundamentally about baseball and it’s about the fans. And I couldn’t be more excited that we're gonna be able to highlight Denver as the venue,” Polis said.

It’s uncertain what kind of seating capacity there might be due to COVID-19 restrictions. For the season-opening series against the World Series champion Los Angeles Dodgers last week, the Rockies had a seating capacity of 21,363 fans, which was 42.6% of the usual capacity.

By July, Polis expects things to be different. He referenced President Joe Biden’s plan to allow all Americans who want to be vaccinated to be able to do so by May.

“We’re talking about a mid-July game so there are really no concerns from that front," Polis said. “I think everybody expects a fully packed, sell-out stadium in July and that’s going to be good for MLB, good for Colorado and an exciting experience for fans.”

But it's a blow to fans in Atlanta.

“Everything that is so great about getting that game is what’s so bad about it leaving Atlanta,” said Rockies outfielder Charlie Blackmon, who grew up near Atlanta. "It’s going to really hurt those people and they’re going to miss out on an incredible opportunity. What’s great about Atlanta is an unbelievable new ballpark that I like to play in.

Manfred made the decision to move the All-Star events and the amateur draft from Atlanta after discussions with individual players and the Players Alliance, an organization of Black players formed after the death of George Floyd last year.

Kemp has vowed to defend Georgia’s measures, and other Republicans have criticized MLB’s move. Texas Gov. Greg Abbott backed out of throwing the first pitch at the Texas Rangers’ home opener Monday and said the state would not seek to host the All-Star Game or any other special MLB events.

The Los Angeles Dodgers will host the 2022 All-Star Game.