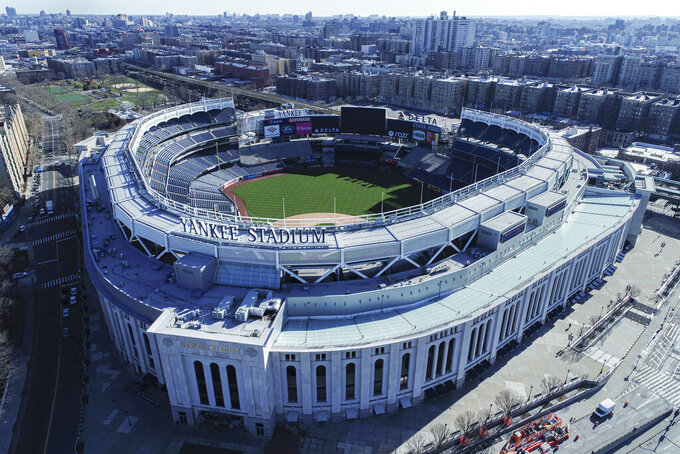 NEW YORK (AP) — Baseball owners and players have reverted to form -- the type displayed over the past half-century during eight work stoppages filled with salary squabbles.

Players proposed to resume the sport in the coronavirus pandemic with a 114-game regular season and full prorated salaries, leaving each player with approximately 70% of what he had been slated to earn.

That proposal was made Sunday, five days after Major League Baseball’s plan for an 82-game season with additional pay cuts that would leave each player taking in 23-47% of his original pay, with the highest earners accepting the biggest cuts.

MLB claims an additional $640,000 would be lost with each extra regular-season game played. The union has said it doesn’t believe those calculations and a sked MLB for more economic documents and data.

Baseball Commissioner Rob Manfred discussed the next move with owners on Monday.

If spring training is to resume in mid-June followed by opening day at around the start of July, a deal would have to be reached by next week.

Players and clubs agreed March 26 to “complete the fullest 2020 championship season and postseason that is economically feasible,” consistent with three provisions:

-- no relevant travel restrictions throughout the U.S. and Canada

-- Manfred determining, after consulting with the union and medical experts, that there is no risk to players, staff or fans to play games with fans at all 30 regular-season ballparks, provided that MLB and the union “will discuss in good faith the economic feasibility of playing games in the absence of spectators or at appropriate substitute neutral sites.”

Players say the March 26 deal covered salaries and they are under no obligation to revisit the subject. MLB says they are if the plan is to use empty ballparks, which is the current intention.

Some players, notably former AL Cy Young Award winner Blake Snell, have said it’s not worth it to them to play for less. Some management officials have said teams should offer a very short schedule, perhaps as short as 50 games.

Mistrust among many is at its highest level since the 1994-95 strike, the last of eight stoppages that started in 1972. Reasons abound.

Salaries have been pretty much flat for five years during a time revenue has been estimated to have risen at a 4% annual rate, a sign the collective bargaining agreement agreed to in November 2016 gained more for the clubs than it did for the union.

Payrolls totaled $4.08 billion in 2016, according to figures compiled by the commissioner’s office that included season salaries, prorated shares of signing bonuses, earned bonuses, option buyouts and termination pay. Payrolls have stayed in a historic narrow range since then: $4.24 billion in 2017, $4.23 billion in 2018, $4.22 billion in 2019 and $4.21 billion this year, based on totals as of the March 28 roster freeze.

Slow free-agent markets following the 2017 and 2018 seasons sparked player anger, and a more regular market this past offseason hasn’t calmed players or the union staff.

Players are livid over what they call tanking and clubs call rebuilding. They view noncompetitive teams as bad for the entire industry, leading to an attendance drop in each of the last four seasons.

Manfred says each club makes its own judgment on whether it can contend, and clubs are using the system to their advantage when they jettison veterans, rebuild with draft picks and international youth, then contend again. World Series titles by Kansas City in 2015 and Houston in 2017 are pointed to as examples.

The union filed a grievance in February 2018 alleging the Miami Marlins, Oakland Athletics, Pittsburgh Pirates and Tampa Bay Rays did not use revenue sharing money received properly. The labor contract specifies a team has to use the money “in an effort to improve its performance on the field.”

MLB has defended the teams, saying money can be used in areas other than major league payroll: amateur signings and minor league staff are just two examples. Manfred has pointed out that Oakland reached the playoffs in 2018 and Tampa Bay last year.

Arbitrator Mark Irvings denied a grievance by Kris Bryant against the Cubs, accepting Chicago executive Theo Epstein’s rationale for delaying the third baseman’s debut at the start of the 2015 season. Irvings wrote there was no proof of “a nefarious motive” and the union could not prove “bad faith to mask service time manipulation.” He did not rule on whether service time manipulation was permissible in any circumstance.