MLB's 2020 rookies debut all over again with fans in stands 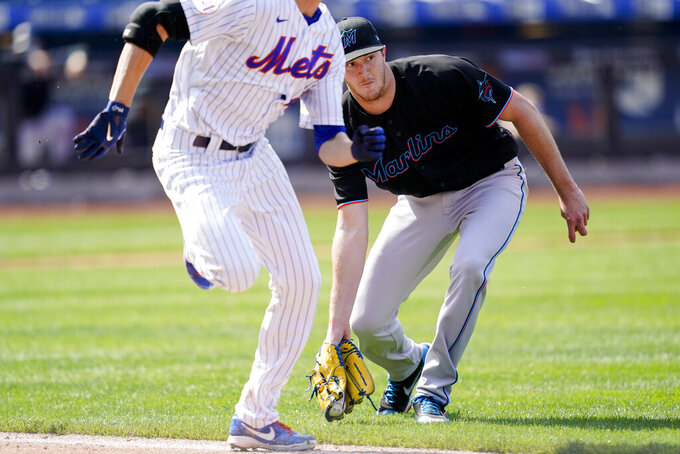 NEW YORK (AP) — Trevor Rogers’ major league debut was only about half what he expected.

“A lot of jitters,” the Miami Marlins left-hander recalled. “And a lot of cardboard cutouts.”

Rogers, like the other 211 players who made their big league debuts in 2020, got an unusual introduction to baseball’s top level — a pandemic-shortened season when fans were almost entirely banned from the ballpark. Now, many of those players are back in the majors, and all those cutouts have been replaced by limited-capacity crowds that are still some of the biggest those rookies have seen.

“It has been amazing,” said fellow Marlins youngster Jazz Chisholm Jr. “I feel like every day is a new opening day for me because I’ve never had the chance to play with fans in the big leagues.”

Chisholm and Rogers both broke in with Miami last season, part of an up-and-coming club that overcame a season-stalling coronavirus outbreak to end a 16-year playoff drought.

Rogers admits the fans momentarily threw him off his game. The 23-year-old made his first start this season against St. Louis on April 5 and trailed 3-0 after his first inning on the mound. Mechanical issues were part of the problem, but he also acknowledged having those debut jitters all over again with 4,605 fans at Marlins Park.

“I was overeager, for sure,” he said. “Hearing the noise of the crowd, the talking, the chit-chatting, the cheering and booing and all that good stuff, it was something I had to get used to again. It definitely got the heart rate going a little faster.”

A first-round draft pick in 2017, Rogers adjusted just fine in his next turn — a Sunday matchup against two-time Cy Young Award winner Jacob deGrom in New York. He outpitched the Mets' ace in a 3-0 victory, aided by a stunning homer from Chisholm off deGrom’s 100 mph fastball at the letters.

With his bright blue hair and extravagant jewelry, Chisholm’s eagerness to perform for an audience isn’t much of a surprise.

“I love having fans out there,” the infielder said. “I love hearing them talk their trash, I love the compliments, I love everything the fans bring to the game, the energy. It does it all for me. It gives me goose bumps getting ready to go out there and play a game.”

Business isn't quite as usual in the big leagues. After filling stadiums with cardboard likenesses of fans last year, teams have begun allowing limited fan access, with an average crowd of roughly 10,000 per game. For players coming from the minors, those crowds are already about as big as they've seen — Triple-A parks generally average 5,000-9,000 patrons per game.

For some, the return has been well-timed.

Yermín Mercedes has been a breakout star with the Chicago White Sox, becoming the first player since at least 1900 to open a season with eight straight hits — over his first four major league starts, no less.

The 28-year-old has seemingly cemented himself as a fan favorite in less than two weeks. He's been greeted by huge cheers when he comes to bat, and he posed for photos near Chicago's dugout last week with a fan wearing a custom No. 73 jersey with “Yerminator” stitched on the back.

“They love me right now,” Mercedes said, adding: “I’m feeling comfortable, I’m feeling great, because I know I have people behind me.”

Those crowds are easy motivation for players trying to work their way back to the bigs, too, like Colorado Rockies right-hander Ryan Castellani. The 25-year-old was called up off the taxi squad for his first major league start last Aug. 8 and delivered four no-hit innings against Seattle.

“From a selfish perspective, it was awesome," he told The Associated Press. “I mean, I love getting called up pitching, it was a great game. But from a family perspective and all that, I would say it was a little bit of a disappointment.”

Castellani ended up pitching in 10 games, all a little bittersweet because his family couldn't come see him in person. He's been with his wife since high school, meaning she's been with him through his entire career. But she — like the rest of his family — had to watch from afar.

He made sure to collect mementos, including at least a half-dozen balls from his debut and more from his first victory a couple of weeks later. He distributed those to family, friends and influential others, including Rockies assistant director of player development Chris Forbes, who scouted and drafted him.

Castellani is working out at Colorado's alternate training site, waiting for his next big league chance. He's grateful to have had something of a soft open last year — “it was just baseball, there wasn’t any distractions,” he said — but he expects it to feel different the next time he toes a major league mound.

“That first game in front of, like a huge crowd, huge ballpark, having family in the stands, that’ll be, I feel like, just as good, maybe even better, than my debut,” he said.