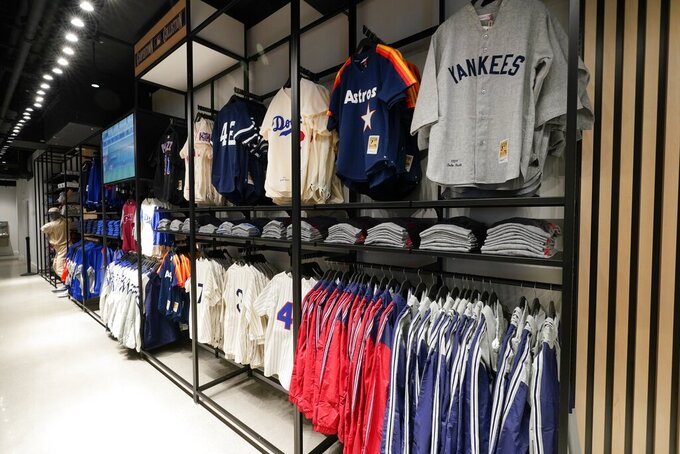 NEW YORK (AP) — Inside a former Manhattan television studio, the scaffolding has come down and Major League Baseball’s first retail store opens Friday across from Radio City Music Hall in a part of Midtown Manhattan largely emptied by the coronavirus pandemic.

The commissioner’s office moved across town from Park Avenue during the offseason and Baseball Advanced Media came over from the Meatpacking District along with the video review control room where umpires gather to make final decisions on calls. The administrative staff is just starting to come to work more often on floors 5-9, and the Flagship Store at street level opens in about 10,000 square feet filled with caps, balls, jerseys and assorted licensed items splashed with club logos and player likenesses.

"It has certainly taken a hit, but we’re seeing signs of life,” MLB chief revenue officer Noah Garden said. “When we reforecast for the year this year, we thought it was going to be a much bigger hit than it will end up being, but it’s still a hit. It’s a challenging environment out there. But certainly as it relates to this store, there’s no better city for retail in the world than this one. And it’s going to come back, and as it does, we’re going to be here to service the fans and the folks that are traveling in the streets.”

Garden joined MLB Advanced Media in 2001 and was executive vice president of business and sales until August, when he was promoted following the departure of deputy commissioner of business and media Tony Petitti. For the commissioner’s office, it marks a return to the Rockefeller Center area MLB left when Commissioner Peter Ueberroth ordered a move to Park Avenue in the 1980s that allowed the commissioner’s office, American League and National League to relocate to the same building.

The two-floor store is in the space formerly occupied by the studio of the New York Mets’ SNY regional sports network. Garden envisions it will be used for broadcasts of the MLB Network and player appearances in an area that post-vaccine will be heavily trafficked again, especially on days of Radio City events such as the Christmas show with the Rockettes.

For now there is social distancing. Jerseys and caps are among about 2,500 items for sale, and there is a customization station, a lifestyle section, throwback attire, a Cooperstown area, game-used gear and a photo booth. The Commissioner’s Trophy awarded to the World Series champion will be on display next week.

“Most of the fan base is still at their local market, and so we’re looking at different opportunities within those local markets to make sure that we have enough product, the championship product, and then our retail partners are able to have the assortment necessary to get to the fans that normally would be able to just go out and get them all throughout town or at the local stadium,” Garden said. “So that’s really been our focus.”