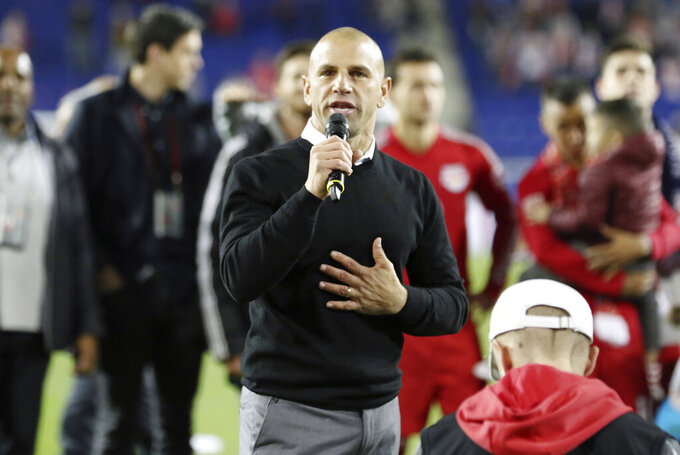 Major League Soccer has unveiled MLS NEXT, its elite youth development platform that seeks to fill the gap after the U.S. Soccer Development Academy shuttered in April.

MLS NEXT, with 113 clubs and 489 teams across six age groups, kicks off competition this weekend.

The game schedule is being announced in four-week increments because of the coronavirus pandemic. Teams must adhere to rigorous health and safety guidelines as outlined in U.S. Soccer's Play On initiative, as well as local regulations. Additionally, competition will be regional to eliminate air travel and overnight trips.

MLS Commissioner Don Garber assured participants in MLS NEXT that the league is making health and safety a priority in the midst of the crisis.

“We understand and we take responsibility, and are very thoughtful about our obligation to ensure that we are managing this during the pandemic in the safest and healthiest way, the same way we did when we managed the MLS is Back tournament, the same way we’re doing now that our teams are traveling and playing in their stadiums," Garber said.

The league includes teams from all 26 current MLS franchises, the four planned expansion clubs, a handful of USL teams and 78 nonprofessional clubs. There are more than 7,000 players.

Garber said the league collaborated with youth soccer officials, as well as players, coaches and parents, to come up with an innovative approach to player development.

“We recognize that the future of our sport, the future of the sport of soccer in our country and really, the future strength of our league, really depends on the improved and growing quality of our future players, as well as our future coaches,” Garber said in formally unveiling MLS NEXT this week.

The U.S. Soccer Development Academy was disbanded April 15 amid financial difficulties caused by the coronavirus pandemic, leaving some 200 youth teams nationwide with an uncertain future. Launched in 2007, the USSF academy had included competitions in five age groups. All the league's teams were part of the academy.

Players developed in the MLS academy system include Alphonso Davies of Bayern Munich, Tyler Adams of RB Leipzig, Jordan Morris of the Seattle Sounders, Weston McKennie of Juventus and Brenden Aaronson of the Philadelphia Union.

The NFL, NBA, MLB, NHL, MLS and college football have only played on the same date twice before, the last time in October 2018.

He was replaced in the interim by Bradley Carnell, an assistant with the Red Bulls since 2017.

It's the third coaching change during this very odd season.

In May, Jaap Stam was named head coach at FC Cincinnati. He replaced Ron Jans, who resigned in February after he was accused of using a racial slur while singing along to music playing in the team’s locker room. Jans apologized.

LLETGET, DIKE HONORED: LA Galaxy midfielder Sebastian Lletget was named MLS Player of the Week after scoring a pair of goals in the team's 3-0 victory over LAFC. He has four goals and two assists in nine regular-season matches.

Orlando City striker Daryl Dike was named MLS Player of the Month. The rookie out of Virginia had three goals and two assists in five matches in August.