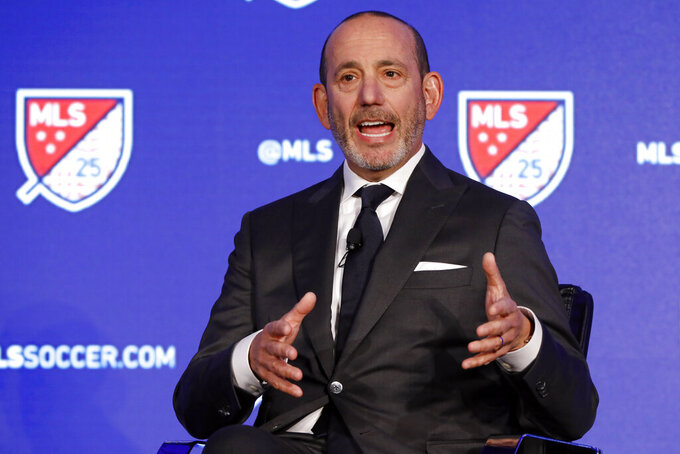 FILE - In this Feb. 26, 2020, file photo, Major League Soccer Commissioner Don Garber speaks during the Major League Soccer 25th Season kickoff event in New York. Major League Soccer said Saturday, Aug. 8, 2020, it will resume its season once the MLS is Back tournament in Florida wraps up. The league's 26 teams will each play 18 games, with the first between FC Dallas and Nashville set for Aug. 12.(AP Photo/Richard Drew, File)

Major League Soccer said Saturday it will resume its season once the MLS is Back tournament in Florida wraps up.

A majority of games will be played without fans because of local regulations. Teams will be subject to a rigorous testing protocol and will use charter flights to travel.

MLS suspended the season on March 12 because of the pandemic after teams had played two games each.

The league has been playing the monthlong MLS is Back tournament without fans at ESPN's Wide World of Sports complex at Walt Disney World. The championship match is set for Tuesday between the Portland Timbers and Orlando City.

Players and team personnel have been sequestered in a pair of Disney resorts for the duration of the tournament, which started on July 8. The group stage matches of the World Cup-style tournament counted toward the regular season.

“Since suspending play in March, we have been working on plans to play as much of our season as possible, beginning with the tournament in Florida and resuming in our local markets following the competition," Commissioner Don Garber said in a statement. "We remain focused on the health and safety of our players, coaches and staff, and look forward to continuing our season in our home markets.”

Eighteen clubs will make the playoffs, with the MLS Cup championship game set for Dec. 14. Decision Day, the final day of the regular season, is set for Nov. 8.