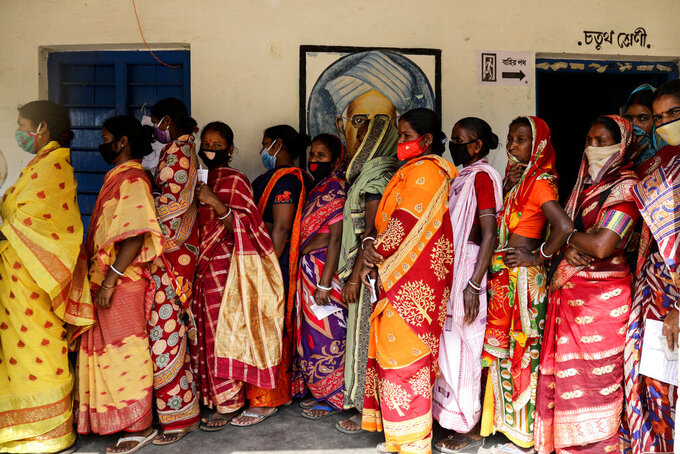 Voters stand in a queue to cast their votes during the first phase of elections in West Bengal state in Pirakata, India, Saturday, March 27, 2021. Voting began Saturday in two key Indian states with sizeable minority Muslim populations posing a tough test for Prime Minister Narendra Modi’s popularity amid a months-long farmers’ protest and the economy plunging with millions of people losing jobs because of the coronavirus pandemic. (AP Photo/Bikas Das)

NEW DELHI (AP) — Two Indian states with sizeable Muslim populations began voting in local elections Saturday in a test of strength for Prime Minister Narendra Modi, whose Hindu nationalist agenda is being challenged by months of farmer protests and a fresh wave of the pandemic.

The BJP has for years been accused of stoking religious polarization and discriminating against minorities, and faces stiff challenges in both states with populations that are nearly 30% Muslim. Nationwide, Muslims comprise nearly 14% of the 1.4 billion people, while Hindus make up 80%.

“The BJP’s success depends on if it is able to polarize Hindu votes to a huge extent, and get half of the 70% of Hindu votes,” said Subir Bhowmik, a political analyst.

The elections are seen as crucial for the BJP to gain a foothold in the northeast and south.

The vote comes as tens of thousands of farmers have rattled Modi’s government with prolonged protests on the fringes of the capital, New Delhi. And India’s economy is still struggling to emerge out of the coronavirus crisis — another pivotal challenge for Modi, who came into office partly on promises of economic development — just as cases are rising again even as a massive vaccination campaign has begun.

Manmohan Singh, a former prime minister and an opposition Congress party leader, criticized the BJP’s Hindu nationalism, saying that society was being divided on the basis of religion, culture and language.

“The basic rights of the common man are being denied and there is an atmosphere of tension and fear,” Sing said.

In West Bengal, rival groups have attacked each other with sticks and rocks, and set vehicles on fire during campaigning. Images of a fiery Banerjee, who’s been addressing massive crowds from a wheelchair after a leg injury, have set the tone for a tough battle.

Banerjee heads a powerful regional party, the All India Trinamool Congress, which came to power 10 years ago years after unseating more than three decades of Communist Party rule.

On Saturday, Banerjee objected to Modi visiting a Matua Hindu community leader’s temple during his visit to neighboring Bangladesh, where he is participating in the country’s 50th anniversary of independence.

Banerjee accused him of trying to influence the voting by the Matua community in West Bengal state, where they comprise nearly 10 million of 70 million voters.

Kailash Vijayvargia, a BJP leader, rejected Banerjee's criticism and said she was just rattled by the growing popularity of the BJP party in the state.

In West Bengal and Assam, the BJP is banking on its strong Hindu nationalist ideology to draw votes. The party is trying to galvanize Hindu support by promising to deport hundreds of thousands of Bangladeshi Muslims who fled their homes decades ago. In 2018, Home Minister Amit Shah described them as “termites” eating into India’s resources.

The BJP also enacted a controversial citizenship law in 2019 that provides a fast track to naturalization for some migrants who entered illegally while fleeing religious persecution. But it excludes Muslims, which critics say is discriminatory and a violation of India’s constitution.

In southern India, Modi's BJP party is vying for a third spot in Kerala, currently ruled by a Communist Party-led government. And in legislative elections in Tamil Nadu, both the BJP and Congress have allied with powerful regional parties as junior partners.

Voting in Kerala and Tamil Nadu and the Union Territory of Puducherry will be held next month with all the results declared May 2.