Montana goes red; it's status quo in other governor races 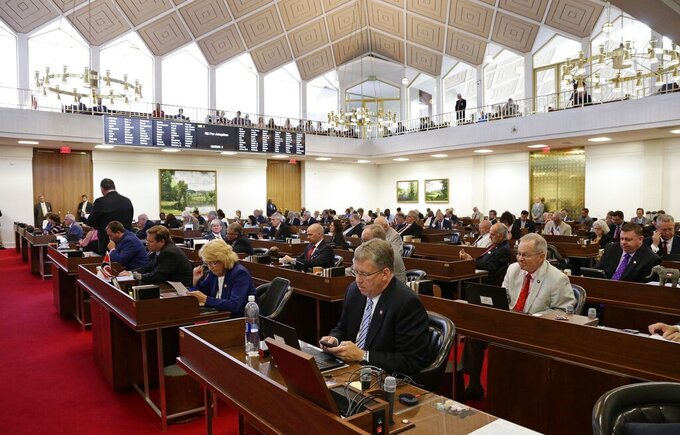 FILE - In this Tuesday, July 24, 2018, file photo, members of the North Carolina House gather for a special session at the General Assembly in Raleigh, N.C. (AP Photo/Gerry Broome, File)

Montana is getting a Republican governor for the first time in 16 years, but voters decided against partisan changes in the 10 other states where the office was on the ballot Tuesday.

It's not clear whether Democrats have been able to flip any legislative chambers.

Efforts to battle the coronavirus pandemic have put governors in the spotlight while state legislatures are poised to determine redistricting, abortion, health care and other super-charged topics. Both are on the ballot this year in races that have been overshadowed nationally by the presidential race but have drawn intense interest and massive spending in their states.

Across the country, 35 are picking state lawmakers this year.

Democrats are hoping to gain control of more state legislative chambers after Republicans scored huge wins in 2010. That put them in charge of drawing congressional and state legislative maps after that year's Census, a process that kept them in control in most of those states throughout the decade.

In most states, legislatures and governors have a role in drawing congressional and legislative maps, a process that starts after the U.S. Census delivers its decennial count at the end of this year.

Control of governor's offices and legislatures also will determine much of how coronavirus-related restrictions and recovery efforts go.

If an increasingly conservative U.S. Supreme Court throws out the right to an abortion or portions of the Affordable Care Act, the new policies could be set state-by-state.

The only governor's job to change parties is in Montana, where Republican U.S. Rep. Greg Gianforte defeated Democratic Lt. Gov. Mike Cooney. The job was up for grabs as the incumbent, Democrat Steve Bullock, reached his term limit.

The national Democratic and Republican governors associations and the campaigns themselves have contributed more than $24 million to the race.

In Missouri, incumbent Mike Parson, a Republican, defeated Nicole Galloway, the state auditor who was the Democrats' best chance to pick up a seat. The race had some echoes of the race for president; Parson, who has resisted mandating mask usage, tested positive for the coronavirus in September as the state's case total started to surge.

Galloway made Parson's response to the virus outbreak a core part of her campaign. An Associated Press survey of the electorate found Parson ahead in rural areas, Galloway leading in cities and a close race in suburban areas.

While Democrats have been chipping away at Republicans' edge in state political offices, the GOP is still in control of the majority of state legislative and executive branches.

The only governorship besides Montana without an incumbent on the ballot is Utah, where Spencer Cox will replace fellow Republican Gary Herbert, who did not seek re-election after more than a decade in office.

Republicans are seeking to expand their power by taking over the legislature in New Hampshire. But it's Democrats who are on the offense elsewhere, including Arizona, Florida, Georgia, Iowa, Michigan, North Carolina, Pennsylvania and Texas.

Party control in some of those chambers may not be clear immediately.