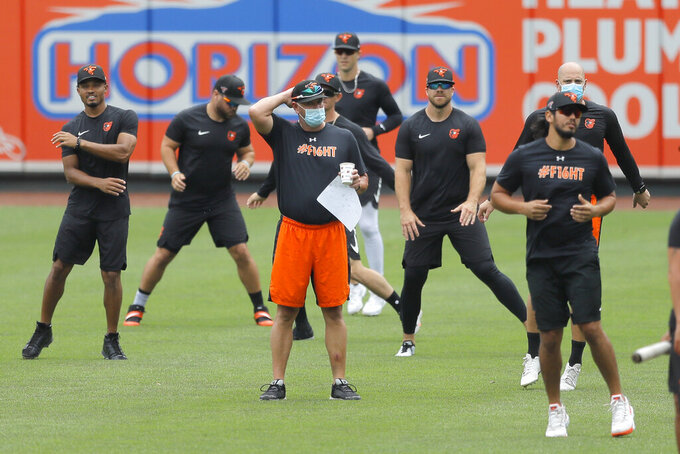 As baseball nears the two-week countdown to the start of its delayed season, the COVID-19 pandemic continues to keep more players, including Boston Red Sox projected opening day starter Eduardo Rodriguez, off the field.

On Tuesday, one day after Major League Baseball released its 60-game schedule, there was continued evidence of the difficulties caused by the pandemic.

The San Francisco Giants suspended workouts at Oracle Park as they awaited the results of weekend tests for the coronavirus. The Chicago Cubs' workout was delayed.

Oakland left-hander Jake Diekman, who has ulcerative colitis, an autoimmune condition, said teams having to call off workouts because of delays in test results “just can't happen.”

“I know they’re trying their hardest, but I don’t know if that’s good enough for right now,” Diekman said Tuesday. “It’s a little worrisome. Say we go on a 10-day road trip and we only get results one time. That’s not very good with 45 or 50 people in a clubhouse at one time.”

Giants manager Gabe Kapler said one missed day wouldn't put his club behind. He said he expects the testing process to improve.

“I feel as confident today as I did yesterday,” Kapler said. “I understand that there are going to be hiccups along the way. ... I think more than anything I just maintain a level of empathy for everybody that’s working really hard to get our camp up and running but also across the league and for all the clubs that are working really hard to put their players in a position to have success. Nobody expected this to be easy and everybody is doing the best that they can.”

Rodriguez, who broke out in 2019 as a star, and Red Sox prospect Bobby Dalbec tested positive for the virus.

Rodriguez had not reported to camp after informing the team that he had been around relatives who had been ill. Dalbec, a third baseman, also is home and is asymptomatic.

Manager Ron Roenicke said it is “just unfortunate” the positive test could jeopardize Rodriguez’s chances to start on opening day. Rodriguez had career-best numbers with 19 wins and a 3.81 ERA in 2019.

Keller, 24, said he has “minor symptoms that remind me more of an allergy attack.”

The threat of an infection was enough for the Cleveland Indians to keep outfielder Franmil Reyes away from camp. Reyes was told to stay home after he was seen on social media attending a weekend holiday party without wearing a mask.

It was an example that off-field activities can affect a player's status.

Francona said Reyes could have exposed himself and his teammates to the virus by not practicing social distancing or wearing a mask. Francona said he has used the incident as a teaching point for other players. He said Reyes has apologized.

“This is not to poke at Franmil,” Francona said, adding Reyes is “a wonderful kid and I don’t ever want that to be disputed. But we have gone around to the other players and talked to them about it.”

The Cubs' workout was delayed a few hours as the team awaited test results. On Monday, Cubs slugger Kris Bryant criticized the lack of frequency of the tests and delays in getting results.

Manager David Ross said Tuesday's delay “isn’t a huge deal” and seemed bigger ”with what’s been going on with some teams the last day or so."

“We can’t just crush MLB because this is new to them, too, and the testing facility,” Ross said.

The two teams from last year's World Series, the champion Washington Nationals and the Houston Astros, resumed workouts after canceling practices on Monday because of testing delays.

“They’re still trying to iron out the bugs,” Astros manager Dusty Baker said. “No one’s happy about it — the players, the MLB, probably the testing site. But the tests came back today, and we were able to work."

Some Washington players did not take part in workouts, including Starlin Castro, Juan Soto, Howie Kendrick and Victor Robles. General manager Mike Rizzo said two unidentified players tested positive for the coronavirus. Any players and staff who came into contact with the two players had to be re-tested.

“Several of those players that you mentioned beyond the two positive tests have tested negative in their intake test, but if you come into any type of contact with a player that is positive — and we cast a real wide net of being in contact — (then) you have to be re-tested," Rizzo said. "Those players were re-tested a couple days ago, and we’re waiting on the results on a group of those players.”

Braves manager Brian Snitker, eager for a quiet day, embraced “our first normal feel day since we’ve been back.”

Four Atlanta players, including first baseman Freddie Freeman and one of the team's top relievers, Will Smith, have tested positive. Two veterans, outfielder Nick Markakis and right-hander Félix Hernández, have decided to sit out the season.

On Tuesday, Snitker had his first chance to address his full squad at Truist Park as he made plans for a situational scrimmage on Wednesday and the team's first intrasquad game on Monday. Before Tuesday, only small groups had been on the field as the team practiced social distancing.

“I told the guys I’ve never felt so detached from the team in all my life because we’ve been here, there and everywhere,” Snitker said. “I feel like today is the start of something that we’re all kind of getting back in the swing of these things.”

The Baltimore Orioles will play their first intrasquad game on Wednesday night at Camden Yards. Left-hander Tommy Milone and right-hander Tom Eshelman will start in the game, which is scheduled for 7 1/2 innings.

“Everyone’s getting tired of going through the daily workout and ready to play some meaningless games, at least where pitchers face hitters in a game environment,” manager Brandon Hyde said.

The intrasquad games and workouts give top prospects opportunities to show they belong.

In a matchup of the Marlins' last two first-round picks, right-hander Max Meyer faced right fielder JJ Bleday in batting practice. Both hope to make the majors this season.

“Everyone has to be ready to go,” Meyer said. “COVID could go through the locker room. You never know what’s going to happen, especially the time we’re in right now. So all of us are getting ready.”