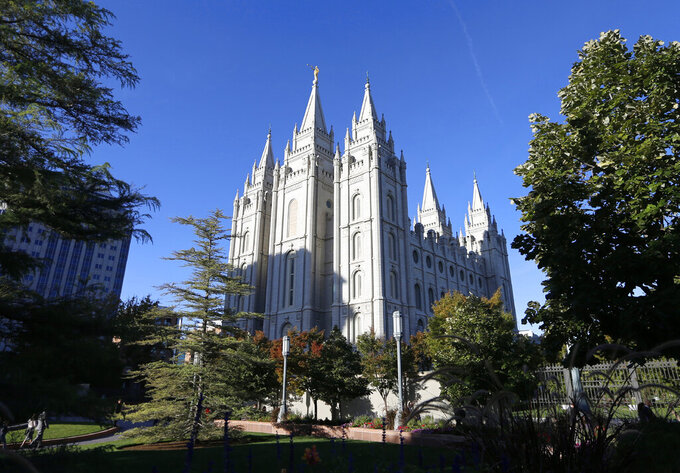 FILE - In this Oct. 5, 2019, file photo, The Salt Lake Temple stands at Temple Square in Salt Lake City. The Church of Jesus Christ of Latter-day Saints added new language to the faith's handbook Friday, Dec. 18, 2020, imploring members to root out prejudice and racism, adding significance and permanence to recent comments by top leaders on one of the most sensitive topics in the church's history. (AP Photo/Rick Bowmer, File) 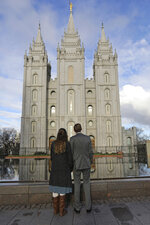 SALT LAKE CITY (AP) — The Church of Jesus Christ of Latter-day Saints added new language to the faith's handbook Friday imploring members to root out prejudice and racism, adding significance and permanence to recent comments by top leaders on one of the most sensitive topics in the church's history.

The faith’s past ban on Black men in the lay priesthood, which stood until 1978, remains a delicate issue for members and non-members alike. The church disavowed the ban in a 2013 essay, saying it was enacted during an era of great racial divide that influenced the church’s early teachings, but it never issued a formal apology — a sore spot for some members.

Racial injustice has since surged to the forefront of global consciousness following the police killing of George Floyd, a Black man, in Minnesota that led to widespread protests this summer.

In the handbook from the faith widely known as the Mormon church, the new section on prejudice echoes advice in a string of speeches by top leaders this year, reminding 16 million members around the globe that a person's standing with God depends on devotion to the commandments, not the color of their skin.

“The church calls on all people to abandon attitudes and actions of prejudice toward any group or individuals," it said. "Members of the church should lead out in promoting respect for all of God’s children.”

It notes that prejudice can be based on “race, ethnicity, nationality, tribe, gender, age, disability, socioeconomic status, religious belief or nonbelief, and sexual orientation.”

The guidance is latest sign of a more strident tone church leaders have been trying to take against racism in the last five years, said W. Paul Reeve, the Simmons professor of Mormon studies at the University of Utah. The handbook entry gives the message more “cachet and power,” he said.

“It signals an ongoing commitment to eradicate or even be at the forefront of eradicating racial prejudice,” Reeve said. “It is now part of the official handbook that local leaders have and can refer to in counseling with their members and also in giving guidance and direction from the pulpit.”

Preaching for the elimination of racism in speeches and handbook entries is a step in the right direction, but the faith must back that with action to combat systemic racism that remains in the church, said Phylicia Norris-Jimenez, a Black church member from Dallas. She is part of the grassroots Black LDS Legacy Committee, a group of women who organize annual conferences to discuss race issues in the faith.

Members who exhibit racist behaviors should be held accountable, maybe even forced to go before disciplinary councils, she said.

“We can say all these really nice things, but our members are still ignorant as to what it (racism) even means," Norris-Jimenez said. “They are unwilling to learn what that looks in order to be better.”

Rooting out racism is becoming a hallmark of church President Russell M. Nelson's tenure, said Patrick Mason, a religious scholar who is the Arrington Chair of Mormon History and Culture at Utah State University. Since assuming the top post in 2018, he has preached for racial harmony and mutual respect and launched a formal partnership with the NAACP.

Nelson, a 96-year-old former heart surgeon, delivered a speech about racism at a church conference in October and echoed those sentiments in a speech to students at church-owned Brigham Young University.

Including a strongly worded edict in the handbook gives the message more gravity because the document is considered the law within the church, Mason said. Younger members especially will be thrilled because they want the church to be proactive about addressing racism due to the faith's history, he said.

“On the one hand, you should say, ‘Do you really need something in a handbook to tell you to not be prejudiced?’” Mason said. “On the other hand, given not only human history but Mormon history, we do know that these kind of official statements do matter. We do know that racial prejudice and other forms of prejudice are still a problem within the church.”

The church grew more diverse in 2018 when it selected the first-ever Latin American and person of Asian ancestry to an all-male top governing panel. But there are still no Black men on the panel. Black members make up a tiny percentage of church membership.

The handbook changes also include a new warning to rely on credible information and avoid sources that promote “baseless conspiracy theories.”

The new section instructs members to seek out and share only “credible, reliable, and factual sources of information.” It warns against unreliable sources that try to promote “promote anger, contention, fear, or baseless conspiracy theories.”

That section appears to be driven by some church members promoting baseless claims about fraud in the presidential election or scoffing at the notion that masks help prevent the spread of COVID-19, Reeve said.

“It certainly speaks to the current moment we are in,” Reeve said.