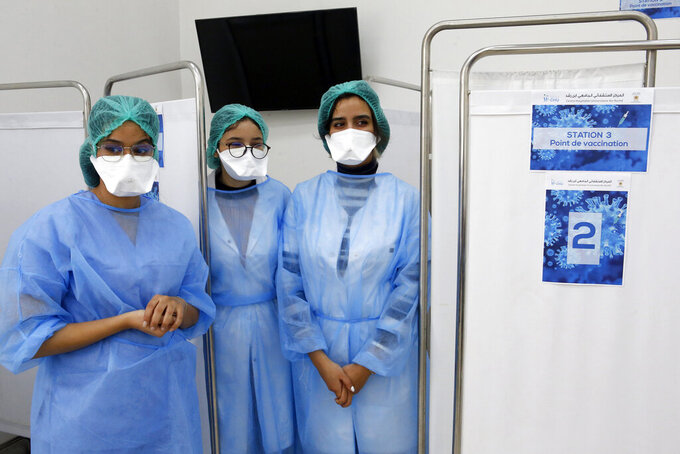 Moroccan nurses wait inside a vaccination booth before administering doses of Sinopharm Covid-19 to a member of the health agency, on the first day of the vaccination campaign, in Casablanca, Morocco, on Friday, Jan. 29, 2021. The King of Morocco Mohammed VI received his vaccine against coronavirus Thursday at the palace Royal Fez launching and officially the vaccination campaign Covid-19 in his country, it will aim at first mainly health workers, security forces and people over 75 years, according to the Moroccan authorities. (AP Photo/Abdeljalil Bounhar)

RABAT, Morocco (AP) — Scores of Moroccan health workers streamed to a spacious white tent erected outside the Avicenne University Hospital in the capital Rabat to get their first dose of COVID-19 vaccines, as a mass vaccination effort began Friday in the North African country.

The bustling vaccination center — one of 600 set up in Rabat alone — aims to inject more than 4,000 health professionals with vaccine doses within three weeks. That's an example of the ambitious targets set by Morocco, which has one of Africa's most advanced coronavirus vaccination plans in place so far.

While European countries and North America started vaccinating several weeks ago, Africa is only just beginning to receive its first doses, notably from China and Russia. Moroccan King Mohammed VI received the country's first injection Thursday, and nationwide vaccinations began Friday - just as the country confirmed its first case of the virus variant identified in Britain.

Among the first patients to walk in to the university hospital tent was Abdelatif Asmamaa, a 58-year-old nurse who has been working on the front lines of the pandemic since March.

Before the first of his two doses was administered, Asmamaa, who suffers from high blood pressure, was greeted by medical staff who inquired about his health status then proceeded to inject him with the Covishield vaccine, developed by the University of Oxford and AstraZeneca.

’It’s an exciting atmosphere,” he said, checking a document indicating when he will receive his second jab. “I feel nothing, it’s like the seasonal flu shot.”

In cubicles scattered across the tent, other nurses, doctors and Health Ministry personnel were getting the shots simultaneously.

Similar scenes unfolded at vaccination locations across the North African kingdom. A government vaccine deployment plan said around 3,000 sites will be set up in total, including mobile units that will deliver shots in remote and rural areas.

The country’s vaccine rollout initially targets those most vulnerable to the virus, including health care workers, security forces and other public authorities, and people over age 75.

The AstraZeneca vaccine, produced by the Serum Institute of India, is one of two vaccines used by Morocco in its free immunization drive. The other is developed by China’s Sinopharm. Both vaccines require two doses and do not need ultra-cold storage.

Morocco aims to get 66 million doses of the two vaccines, covering about 80% of its 35 million population.

Asked what criteria determine the shot to use, Dr. Mina Ait El Qadi, the hospital’s pharmacy director, said that it’s a decision made by the government’s scientific committee. “We don’t really have a saying in choosing which vaccine to administer. We work with what they give us”.

Morocco has seen a drop in confirmed virus cases recently attributed to a dip in testing. Overall the country has reported more than 469,990 confirmed cases, including 8,246 deaths, according to government data. That is among the highest confirmed tolls in Africa.