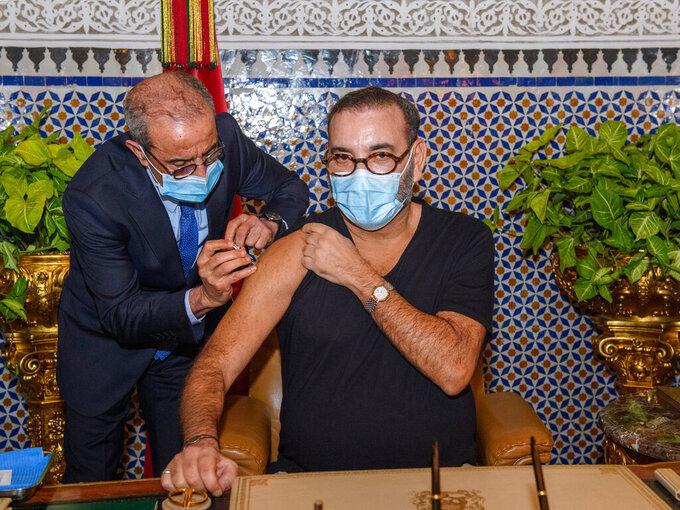 In this photo released by the Royal Palace, Morocco's King Mohammed VI, right, receives the COVID-19 vaccine at the Royal Palace in Fes, as he launches his country's coronavirus vaccination campaign, Thursday Jan. 28, 2021. The North African kingdom received its first shipments of vaccine doses in recent days from China's Sinopharm and Anglo-Swedish drug maker AstraZeneca. (Moroccan Royal Palace via AP)

The monarch took the shot at the royal palace in the city of Fez, Morocco's official MAP news agency reported. The king, who normally appears in public wearing a robe, was pictured in a dark T-shirt and with a surgical mask on his face as he got jabbed in the arm.

Morocco has one of Africa’s most advanced vaccination programs, though the continent remains well behind richer countries such as the U.S. or Britain in inoculating its citizens against the still-spreading virus.

The North African kingdom received its first shipments of vaccine doses in recent days from China’s Sinopharm and Anglo-Swedish AstraZeneca. The government did not disclose how many doses it had received, but the royal palace said the country has sufficient quantities to start inoculations “in the best conditions."

Vaccinations will be free of charge, and the Health Ministry said patients would receive two doses over 21 days.

Morocco says it will get 66 million vaccine doses, covering about 80% of its 35 million population. But supply problems at AstraZeneca, which are causing political tensions across Europe, could throw off Morocco's plans. The country had initially pledged to roll out the vaccine last month but the first doses didn't arrive until Friday.

The campaign is starting at a moment when confirmed virus cases are dropping, apparently because of a dip in testing. Morocco has reported more than 468,383 confirmed cases, including 8,207 deaths.

Morocco approved emergency use of the AstraZeneca and Sinopharm vaccines earlier this month.

Sinopharm carried out tests of the vaccine in the country last year, as part of China's global vaccine diplomacy efforts, and Morocco says it eventually plans to produce the Sinopharm jab locally.

The mass immunization operation will include 2,888 vaccination stations and the deployment of mobile units to factories, offices, campuses and prisons. The health ministry said it would mobilize over 12,000 health professionals as well as the military.

Separately, Morocco is among 92 low- and middle-income countries supported by COVAX, an international effort to ensure that vaccine supplies reach developing countries, according to the World Health Organization. The project has bogged down and hasn’t started supplying any vaccines yet.