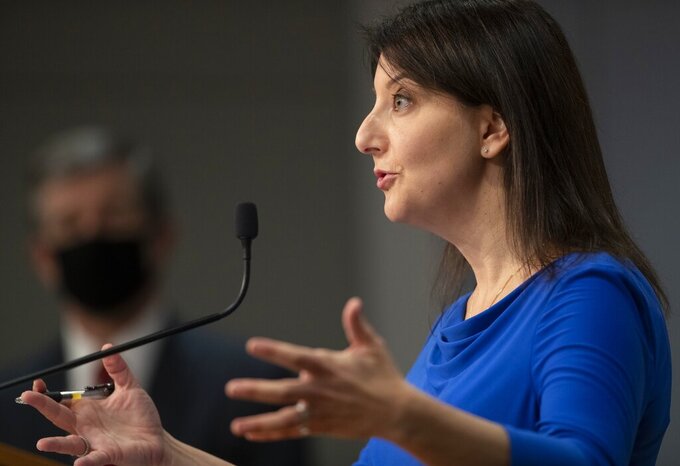 Dr. Mandy Cohen, Secretary of the North Carolina Department of Health and Human Services, discusses vaccine distribution during a press briefing about the coronavirus, Wednesday, Dec. 30, 2020, at the Emergency Operations Center in Raleigh, N.C. (Robert Willett/The News & Observer via AP)

RALEIGH, N.C. (AP) — North Carolina’s top public health official said Tuesday that most nursing home workers are refusing to take coronavirus vaccines being offered in a state that has now become one of the slowest in the nation to get doses into peoples’ arms.

In an interview with The Associated Press, Mandy Cohen, secretary of the state Department of Health and Human Services, attributed some of the sluggishness behind the rollout to staffing shortages, lack of familiarity with the state’s technological systems and logistical hurdles of working with dozens of hospitals and 100 different counties throughout the state.

Her comments came shortly after the governor announced Tuesday the deployment of National Guard members to accelerate the administration of doses.

“We have a decentralized system in North Carolina,” Cohen said. “We have 83 local public health departments, we have 100 counties. We have great pride in that, but when you decentralize things, it does create slowness. We're trying to find that right balance of recognizing the strengths in our local areas but also recognizing where are the challenges.”

“We will use all resources and personnel needed," Cooper wrote. “I’ve mobilized the NC National Guard to provide support to local health providers as we continue to increase the pace of vaccinations.”

The North Carolina National Guard said in a news release that it mobilized approximately 50 personnel in support of the anticipated demand requests from state partners and county health departments. The Guard will be operational this week, according to the news release.

Nearly 110,000 people in North Carolina had received their first dose as of Tuesday morning, according to data from the state health department. Nearly 500 people had received a second dose.

The administration of initial doses thus far account for less than 1% of the state's population of 10.5 million people. Data gathered and shared by the U.S. Centers for Disease Control and Prevention on Monday placed North Carolina as the sixth worst state in the country in per capita first-dose vaccinations. Kansas, Georgia, Mississippi, Alabama and Arizona ranked worse.

Cohen noted that vaccine hesitancy among long-term care staff is “concerning,” given the anecdotal reports the state has gathered thus far. North Carolina is working with Walgreens and CVS, which are responsible for vaccinating residents and workers in long-term care settings, to access and report concrete data. She believes North Carolina is experiencing something similar to an estimate Ohio Gov. Mike DeWine made last week noting that about 60% of staff in long-term care settings have refused vaccination.

“I caution it’s anecdotal, but we are definitely hearing that more than half (are) declining (the vaccine), and that is concerning,” Cohen said.

According to the state's COVID dashboard, nearly 166,000 vaccine doses were allocated to long-term care facilities in the state, as of Monday. Of those, 13,338 doses had been administered.

Still, demand across the state greatly outpaces the available weekly supply of 120,000 doses North Carolina expects to get this month from President Donald Trump's administration.

Cohen said some of the National Guard members will serve as vaccinators, while others will assist local health departments with logistical processes of checking people into sites and ensuring they remain masked and physically distant from one another.

Hospital workers were the first in line to receive doses and some remain unvaccinated due to limited supply. Starting Wednesday, a small number of counties will begin administering doses to elderly people 75 years or older.

The high level of demand has posed concerns about equity and fairness, especially as some local health departments ask residents to make an appointment online. Appointments can fill up quickly and those with fewer digital skills or living in rural communities without broadband access could be left behind.

“We continue to have structural inequalities in our system that are just built into how we operate as a government (and) how we operate as a medical system,” Cohen said. “There are folks who have access and who don't. I think we need to recognize it and then build systems that can try and overcome it."

Though North Carolina health officials have been slow to get doses of the Pfizer and Moderna vaccines into residents’ arms, there are similar problems in other states.

Federal health officials fell well short of their goal of vaccinating 20 million Americans by the end of December. The CDC said Tuesday that more than 17 million doses had been distributed, and 4.8 million people had received a first dose.