Murray status for Australia in doubt after contracting virus 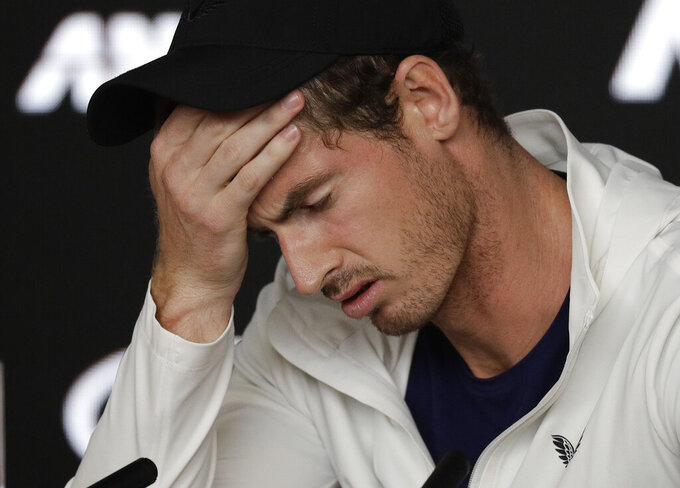 FILE - In this Tuesday, Jan. 15, 2019 file photo Britain's Andy Murray reacts during a press conference following his first round loss to Spain's Roberto Bautista Agut at the Australian Open tennis championships in Melbourne, Australia. Former world number one Murray's participation at the upcoming Australian Open is in doubt after the Briton tested positive for COVID-19. (AP Photo/Kin Cheung, File) 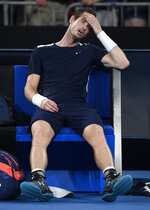 Andy Murray's status for the Australian Open was put in doubt Thursday after he tested positive for the coronavirus only days before his planned charter flight to Melbourne.

The three-time Grand Slam champion is isolating at home near London, the tournament said in a statement.

“Unfortunately this means he will be unable to join the official AO charter flights arriving in Australia in the coming days to go through the quarantine period with the other players,” the statement said. "The AO fans love Andy, and we know how much he loves competing here in Melbourne and how hard he'd worked for this opportunity.”

Murray has been given a wild-card entry into the first Grand Slam tournament of 2021.

The Australian Open was delayed three weeks because of COVID-19 restrictions and is set to begin Feb. 8. Players and officials must spend 14 days in quarantine once they arrive in Australia.

Murray, a five-time Australian Open runner-up, earlier backed out of the Delray Beach Open in Florida to “minimize the risks” of contracting the virus through international travel.

Murray could still compete in Australia. American player Tennys Sandgren was given special clearance to board a charter flight from Los Angeles to Melbourne despite testing positive for COVID-19 in November and again on Monday.

Under tournament protocols agreed with Australian government authorities, all players had to return a negative test before boarding their flights to Australia and would be subjected to further testing on arrival and daily during a 14-day period of quarantine.

American player Madison Keys has also tested positive before her scheduled flight to Australia. She said she is self-isolating at home.

“I've very disappointed to not be able to play in the coming weeks after training hard in the off-season and knowing Tennis Australia and the tours did so much to make these events happen,” Keys wrote on Twitter.

The first of about 1,200 players, coaches, entourage and officials were set to land Thursday in Australia.

Tennis Australia said players who have previously tested positive for COVID-19 were “required to provide additional and highly detailed medical information as proof they are a recovered case and no longer infectious or a risk to the community.”

Murray is currently ranked No. 123 after several years of battling hip injuries and surgery.

The 33-year-old Scot made a teary retirement announcement in Melbourne two years ago before undergoing a second round of surgeries to extend his career.