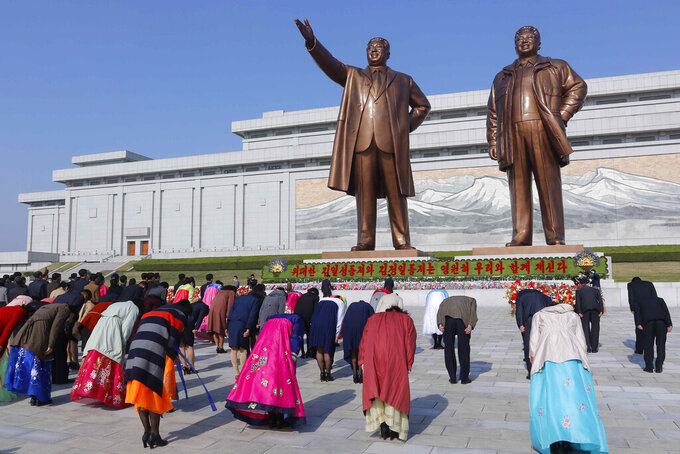 People visit the statues of their late leaders Kim Il Sung and Kim Jong Il on the occasion of the Day of the Sun, the birth anniversary of Kim Il Sung, in Pyongyang, North Korea Thursday, April 15, 2021. (AP Photo/Cha Song Ho)

SEOUL, South Korea (AP) — Mask-wearing North Koreans danced in a plaza or climbed a Pyongyang hill on Thursday to mark the 109th birthday of the country's founder amid pandemic fears and economic woes.

April 15, called “The Day of the Sun” in North Korea, is the most important public holiday. No major events like a military parade were expected this year as North Korea typically stages them for anniversaries that end in zero and five.

Kim Il Sung, a former guerrilla fighter during the Japanese colonial period, founded North Korea in 1948 and still maintains a godlike status in the North. He was succeeded by his son, Kim Jong Il, after his death in 1994.

Elsewhere in Pyongyang, women wearing colorful traditional clothes performed a folk dance. Other women passed along a nearby street decorated with a poster that read, “Kim Il Sung, our comrade and greater leader, will always be with us.”

Thursday’s anniversary comes as Kim Jong Un is rallying the public that's been struggling with an economy battered by shortages of imported goods and sharply reduced trade due to pandemic-related border closures, U.S.-led sanctions and natural disasters last summer.

North Korea maintains it has had not a single case of COVID-19, which is disputed by outside experts.

Some experts say North Korea may carry out a major missile test to draw U.S. attention and win its concessions in any future negotiations. President Joe Biden is expected to complete his administration's comprehensive North Korea policy review soon.