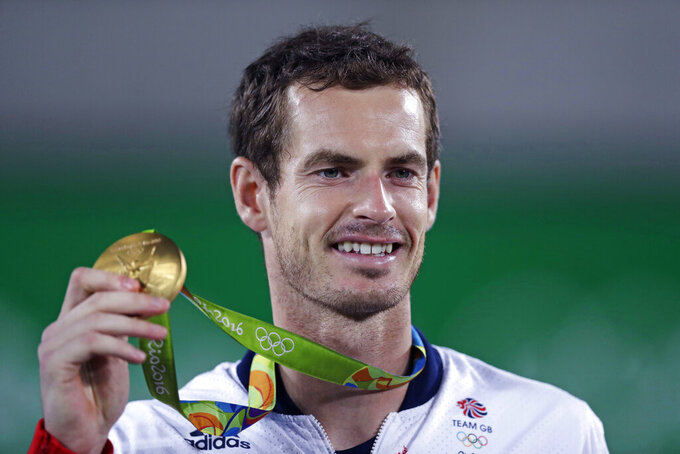 FILE - Andy Murray, of England, smiles as he holds up his gold medal at the 2016 Summer Olympics in Rio de Janeiro, Brazil, in this Sunday, Aug. 14, 2016, file photo. Murray's been through two hip operations and assorted other injuries since he became the first tennis player with multiple Olympic singles golds by winning in 2012 and 2016. His ranking outside the Top 100, but past success — including three Grand Slam trophies — earned him a special spot in the Tokyo field for Britain. “I just hope,” he said, “the body holds up.”(AP Photo/Charles Krupa, File) 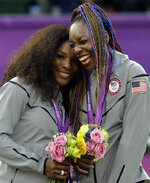 As it was, Naomi Osaka would have been one of the most-watched, most-discussed, most-supported athletes at the Tokyo Olympics.

She's the highest-earning female athlete in the world, a tennis superstar and represents Japan, making her a strong medal contender for the host country.

Then, of course, came the series of events that began unfolding about two months before the July start of the Summer Games.

Just ahead of the French Open in late May, Osaka — who is ranked No. 2 and owns four Grand Slam titles on hard courts, the surface being used in Tokyo — announced she wouldn’t speak to the press at Roland Garros, saying those interactions create doubts for her.

Then, after her first-round victory, she skipped the mandatory news conference.

The next day, Osaka withdrew from the French Open entirely to take a mental health break, revealing she has dealt with depression.

She sat out Wimbledon, too. So the Tokyo Games mark her return to competition — and it's an occasion that matters to Osaka, who was born in Japan to a Japanese mother and Haitian father. (When she was 3, the family moved to the U.S., where she still lives.)

“The Olympics are a special time, when the world comes together to celebrate sports. I am looking forward most to being with the athletes that had waited and trained for over 10 years, for celebrating a very hard year (2020) and having that happen in Japan makes it that much more special,” Osaka wrote in an email interview when she was selected as the 2020 AP Female Athlete of the Year. “It's a special and beautiful country filled with culture, history and beauty. I cannot be more excited.”

Japan's other top tennis player is Kei Nishikori, the 2014 U.S. Open runner-up and a bronze medalist at the 2016 Rio Olympics.

“I'm really looking forward to playing this at home, and I don’t know if there is going to be (a lot of) pressure or not,” Nishikori said, “but I hope I can handle it well.”

Unlike with many Summer Games sports, the Olympics are not the be-all-and-end-all for tennis, which has its four majors.

That, and concerns about COVID-19, surely contributed to players’ decisions to skip the trip — as did injuries, in some cases, such as 2016 gold medalist Monica Puig of Puerto Rico.

Serena and Venus Williams, who have a combined nine golds, won't participate. Nor will Rafael Nadal, who has two. Simona Halep, Dominic Thiem and Stan Wawrinka are among other Slam title winners missing the Olympics.

None of the top four U.S. men in the rankings is going — including Sebastian Korda, who reached Week 2 at Wimbledon and is the brother of two women's golf stars on the American team.

“It’s in a pandemic, which will be, probably, not as enjoyable as the past. And I think for American tennis players, it’s not a huge priority. It’s not as much of a priority as (in) some of the other countries,” said Sam Querrey, who decided not to go. “For most of the Americans, if you play in it, great. But I think for me, I’d rather go play (tour events in) Cabo, Atlanta, D.C. I would rather win Indian Wells than win an Olympic gold, and I think at lot of the other guys feel the same way.”

For all that Novak Djokovic and Roger Federer have accomplished — the Grand Slam titles, the weeks ranked No. 1 and more — neither has an Olympic singles gold. Djokovic earned a singles bronze (at Beijing in 2008); Federer won a doubles gold (with Wawrinka in 2008) and singles silver (at London in 2012).

Andy Murray's been through two hip operations and assorted other injuries since he became the first tennis player with multiple Olympic singles golds by winning in 2012 and 2016. His ranking is outside the Top 100, but past success — including three Grand Slam trophies — earned him a special spot in the Tokyo field for Britain.