Napoli president concerned with virus ahead of game in Spain 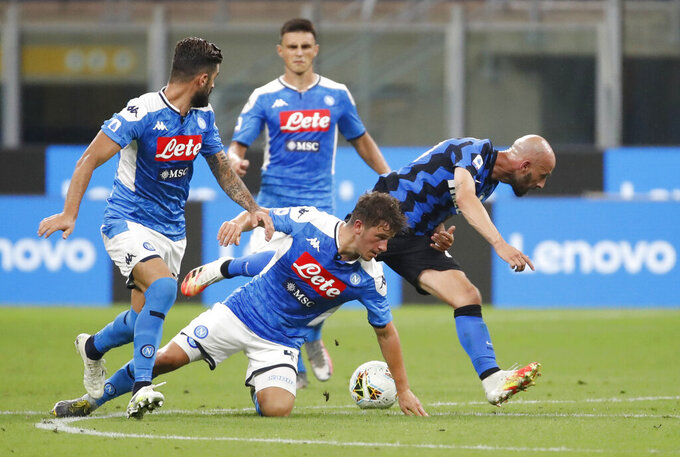 MILAN (AP) — Napoli president Aurelio De Laurentiis raised concerns Thursday about his club traveling to face Barcelona in the Champions League amid a recent spike in coronavirus cases in Spain.

“I hear a lot of perplexity and fear coming from Spain and they’re acting like nothing is wrong,” De Laurentiis said. “What does it take to say, ‘Don’t go to Barcelona but rather go to Portugal, Germany or Geneva?’”

The Barcelona-Napoli game is scheduled for Aug. 8. The first leg of the round-of-16 encounter finished 1-1 in Naples in February. The winner will advance to the quarterfinals in Lisbon, Portugal.

The Barcelona-Napoli game was originally scheduled for March 18 before being postponed amid the coronavirus lockdown.

“If they’ve decided to play the Champions League in Portugal and the Europa League in Germany, I think we can go to Portugal or Germany for the round of 16,” De Laurentiis said. “I don’t understand why it should stay in a city that has a really critical situation.”

Madrid plays at Manchester City on Aug. 7 in the Champions League, while Sevilla is scheduled to face Roma in the Europa League next Thursday in Duisburg, Germany.

Catalonia’s director of public health, Josep Argimon, said regional health officials have responded to a letter from UEFA inquiring about the health conditions in the Spanish city.

“We have answered that Barcelona is a safe place, nothing more,” Argimon said. “This is a question that UEFA is asking all the cities where matches are being played. So I am surprised by all the noise this is creating."

Spanish Health Minister Salvador Illa said Thursday that 60% of Spain’s recent uptick in infections are in the northeast regions of Catalonia, whose biggest city is Barcelona, and neighboring Aragón.

“The outbreak (in Barcelona) is worrying because of the density of the population,” Illa said. “(But) what is happening in Spain is happening in all the other countries in our region. This is a pandemic. We are on alert and acting appropriately. The majority of the outbreaks in Spain are under control.”

When UEFA announced three weeks ago that the Champions League quarterfinals, semifinals and final would be played with single-elimination games in Lisbon, it also announced a Plan B for the round-of-16 games, saying they could also be moved to Portugal.

The stadiums listed for UEFA’s backup plan are Estádio do Dragão in Porto and Estádio Dom Afonso Henriques in Guimarães.