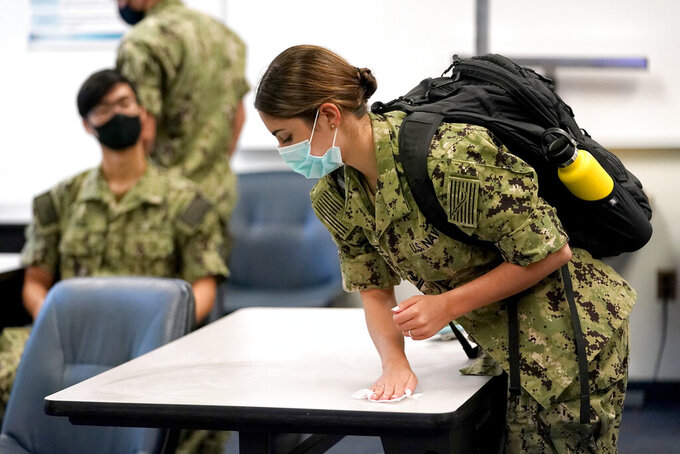 FILE - Inn this Aug. 24, 2020, file photo, a midshipman uses a sanitizing wipe to clean her desk before the start of a leadership class at the U.S. Naval Academy in Annapolis, Md. The U.S. Naval Academy is developing plans to begin vaccinating midshipmen in March 2021, so students can deploy out to ships and with Navy teams as part of their training this summer. (AP Photo/Julio Cortez, File)

WASHINGTON (AP) — The U.S. Naval Academy is developing plans to begin vaccinating midshipmen this month so students can deploy to ships and with Navy teams as part of their training this summer, Vice Adm. Sean Buck told Congress Tuesday.

If the vaccines are available, the midshipmen would be the first military academy students to receive the COVID-19 shots. The plans come as the Naval Academy wrestles with a new uptick in positive coronavirus cases, and has locked down the campus in Annapolis, Maryland, for 10 days. Students have been restricted to their rooms for classes and meals, and can go outside for a maximum of two hours a day, with only one roommate.

The lockdown was announced on Sunday, and includes the suspension of sports events and practices, other than the men's varsity basketball team, which will participate in postseason play because the athletes have been isolated since last week.

Speaking to the House Defense Appropriations subcommittee, Buck said that he's given Navy leaders a timeline for when he'd like to begin giving vaccines to midshipmen who will be deploying out to the fleet.

Generally, students go out on fleet cruises in the summer after their freshman year, do a four-week training stint in the fleet after their sophomore year and go on a higher-level fleet cruise after their junior year. Often the training is part of the process to determine what service job interests them.

“Our Navy has prioritized the operational forces first. They’re getting vaccinated. They have a very safe and healthy bubble,” Buck told lawmakers. “And for them to be willing to accept our midshipmen from the academy as well as midshipmen from NROTC universities around the country, we need to vaccinate them prior to the summer training.”

The Navy has had several small outbreaks on ships, both deployed and at home ports, and leaders have been trying to get crews vaccinated in order to avoid upticks in the virus. The USS Theodore Roosevelt, an aircraft carrier, had a massive outbreak early last year while at sea, and was sidelined in Guam for weeks while the crew went through a methodical quarantine process.

To meet the training timelines, Buck said a small initial group of students would have to start getting vaccines by the last week of March, in order to get out to their deployments in mid-May. That would give them time to get both shots, and have two weeks to ensure their immunity was in full effect.

Buck and the superintendents for the Army and Air Force academies told lawmakers that they have all started providing vaccines to their faculty and staff, based on the priorities set by the CDC and the Defense Department. But the Air Force and Army academies haven't yet begun preparations to give shots to students.

The military leaders said first responders and vulnerable people are prioritized, as noted in the CDC and Pentagon guidelines.

Williams added that he's confident students will want to get the vaccine once it's available.

Air Force Lt. Gen. Richard Clark, superintendent of the Air Force Academy in Colorado, noted that the cadets are “the most healthy of our population and they fall into the lower level” of the priorities.