In the NBA this season, teams will see same refs more often 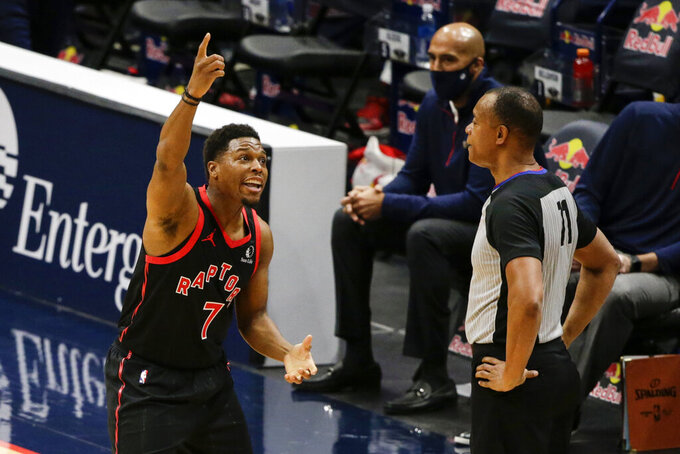 There are nine people who have been on the court to start four different games at Staples Center so far this season.

Only eight of them are players.

The other is referee Scott Foster.

There might be no better way to explain how and why the NBA has changed the travel rules for officials this year than Foster’s work schedule to this point. He was scheduled to work a game in Houston on Dec. 23, only to see the matchup called off when the Rockets didn’t have enough people available to play in accordance with the league’s health and safety protocols regarding the coronavirus.

From there, Foster flew to Los Angeles. He worked four games in six days, and never left L.A. in that span.

That simply would have never happened in past years, when the policy typically was that officials would go at least 13 days between working games in the same city and six days between seeing the same team after reffing one of its games. Those rules will almost certainly come back when the world returns to normal, but for now, in the interest of safety — and common sense — teams are seeing referees more often than usual.

“It changes things a little bit,” Milwaukee coach Mike Budenholzer said. “But obviously, for safety and our health and the health of the officials, it makes all the sense in the world.”

Referees are tested for COVID-19 daily, just like players and coaches, and have to comply with new league rules about avoiding bars, lounges, clubs, public gyms and many other indoor gathering spots. Reducing their air travel is another part of the league's plan to exist outside a bubble in a coronavirus-dominated world. The thinking is simple; less time in the air, less time around other people, less risk.

The Bucks saw David Guthrie and Marat Kogut on the crew that officiated their game at Miami on Dec. 29 and when Milwaukee returned to Miami a night later for the second half of the two-game set, Guthrie and Kogut were back as well. It’s not an aberration this season; Ben Taylor was crew chief in Milwaukee on Friday and had the same role when the Bucks played their next game there Monday.

There are plenty of other examples.

Zach Zarba lives in New York and didn’t have to get on a plane until his fourth game of the season, after opening in Brooklyn and then being crew chief for Knicks’ home games on consecutive nights last week with Scott Wall working alongside him in both of those games.

“We are working to keep our officials safe and reduce the amount of travel and potential exposure,” said Monty McCutchen, the NBA senior vice president who oversees referee development and training.

It can lead to some awkward moments.

Consider the case of Utah’s Jordan Clarkson. He gave referee Karl Lane a bit of a shove — it didn’t appear to be premediated or violent — in a game against the Clippers on Thursday, earning a technical foul. The next night, the Jazz were back on their home floor, with Lane part of the officiating crew again and after Clarkson got fined $25,000 for the shove.

If there were any hard feelings from the night before, none showed.

Clarkson got called for only one foul in the Friday game, a charge. Lane was the official who made that call, which in fairness was a pretty easy one. Nobody complained.

The NBA doesn’t announce which referees are doing which games until 9 a.m. Eastern on game day, which means not many know beforehand which officials are coming to town. But now that it’s clear that some refs are going to have extended stays in cities, at least for this season, Budenholzer says it could be time for coaches to perhaps be a bit nicer to those with the whistles.

“Maybe as coaches, we can be more humane,” Budenholzer said. “If you know you’re going to see that guy the next night, I don’t know, you better be careful and know that he’s probably sleeping on whatever it is you’ve said. So maybe some self-restraint, which is probably never a bad thing for coaches, is more in order considering we’ll see these guys on multiple nights and more often.”