NBC estimates 17 million in US saw opening of Tokyo Olympics 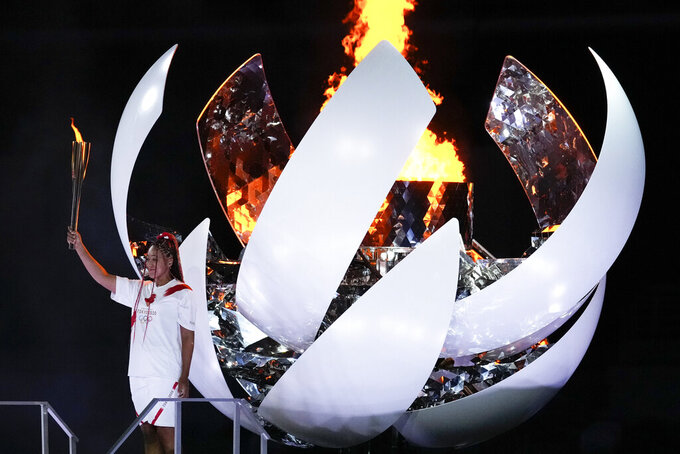 Japan's Naomi Osaka reacts after lighting the cauldron during the opening ceremony in the Olympic Stadium at the 2020 Summer Olympics, Friday, July 23, 2021, in Tokyo, Japan. (AP Photo/Ashley Landis)

NEW YORK (AP) — An estimated 17 million people in the United States watched the opening ceremony for the Tokyo Olympics held in a largely empty stadium, down 36% from the kickoff to the Rio de Janeiro Games five years ago.

The 17 million includes people who watched the ceremony live on NBC or online when it aired Friday morning and those who saw an edited version on NBC in prime time that night, the Nielsen company said Sunday.

NBC was unable to break down how many people watched live and how many saw the prime-time version. The 26.7 million who saw the Rio opening ceremony included both television and online viewership.

Nine years ago, when the Summer Olympics were held in London, the opening ceremony drew a record-setting U.S. audience of 40.7 million people.

It's difficult to tell how much the sluggish start to the Tokyo Games reflects decreased interest in the Olympics, which were delayed a year because of the COVID-19 pandemic, or profound changes in how Americans watch television. With the explosion of streaming as an alternative, ratings for live television have dropped sharply over the past five years.