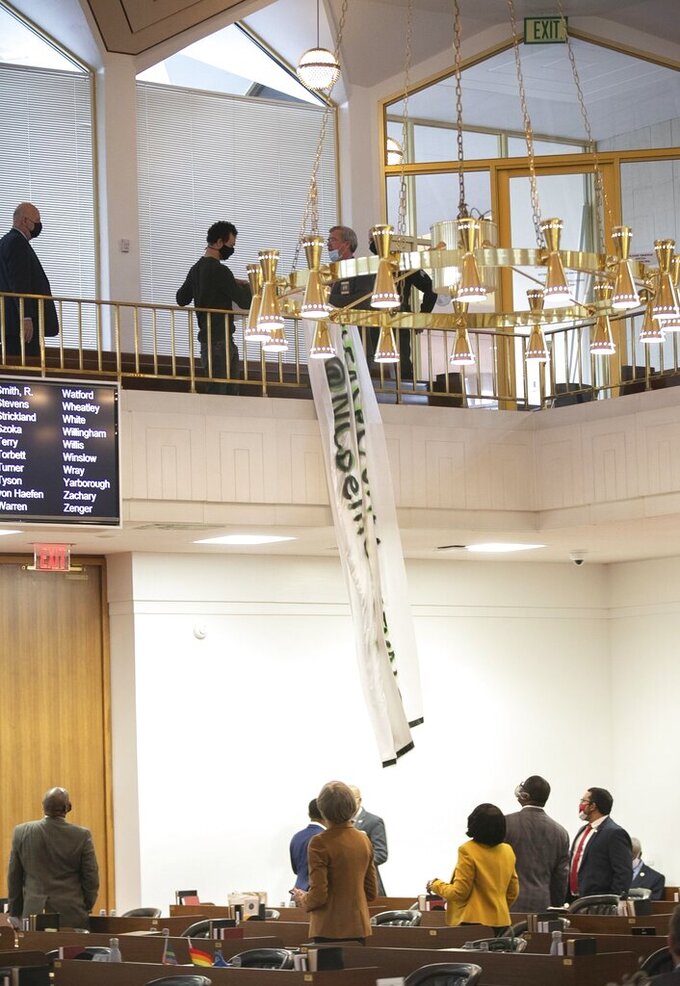 Demonstrators from #ReleaseOurMoneyNC drop banners from the gallery in the House chamber on Wednesday, Jan. 27, 2021 in Raleigh N.C. House Sergeants at Arms quickly removed the banners and the demonstrators from the gallery. #ReleaseOurMoneyNC were calling on lawmakers to to release the people's funds for healthcare, housing and worker's wages protections. (Robert Willett/The News & Observer via AP)

The Republican-controlled House and Senate held no-vote floor meetings to begin what will become the lion's share of the first year of the two-year session. Lawmakers came back two weeks after a one-day meeting Jan. 13 to seat members and reelect Rep. Tim Moore as House speaker and Sen. Phil Berger as Senate leader.

The legislature's largest task is to approve a state government budget that Democratic Gov. Roy Cooper is willing to sign before the next fiscal year begins July 1. Berger and Moore reiterated to reporters that early-year topics are likely to include addressing how to distribute more federal COVID-19 dollars Congress approved in December and locating more money for rural broadband service.

Financial aid to businesses hamstrung by pandemic-relating closings and helping K-12 students at risk of failure after experiencing remote learning for much of the past year also are high priorities, Republicans said. Without statewide mandates to return to class, some large school districts are keeping all students away from in-person learning, citing COVID-19 safety.

“One of the long-lasting tragedies we are seeing in slow motion right now .. (is) that we don't have kids in school," Berger said.

Moore, a Cleveland County Republican, said he anticipated the first vote next week on a narrowly-tailored coronavirus measure. It could extend a program that expired in the fall that sought to get $335 stimulus-style payments to parents.

Since the November election extended divided government in Raleigh for another two years, Berger, Moore and Cooper have been preaching consensus-building, particularly toward enacting a state budget.

The previous two years were marked by a budget impasse that never got totally resolved, with differences over Medicaid expansion the primary cause. And while all of Cooper's vetoes were upheld, the governor's agenda was largely sidelined as well. This year, Cooper’s vetoes still can’t be overridden if all Democrats remain united.

“I don't think anybody wants a budget stalemate,” Cooper told reporters at a coronavirus response news conference. “I think we owe it to the people of this state to do everything that we can to find as much as common ground as we can.”

“We learned the last time, when you take a hardline position that it’s got to be my way ... everybody loses in that scenario,” Senate Minority Leader Dan Blue said.

Wednesday's meetings were marked by a few demonstrators who unfurled banners from the House gallery above the chamber floor just before the meeting began at midday. The banners bore messages demanding lawmakers expand Medicaid, protect workers and spend the state's “rainy-day” reserve funds to address the pandemic's effects on residents.