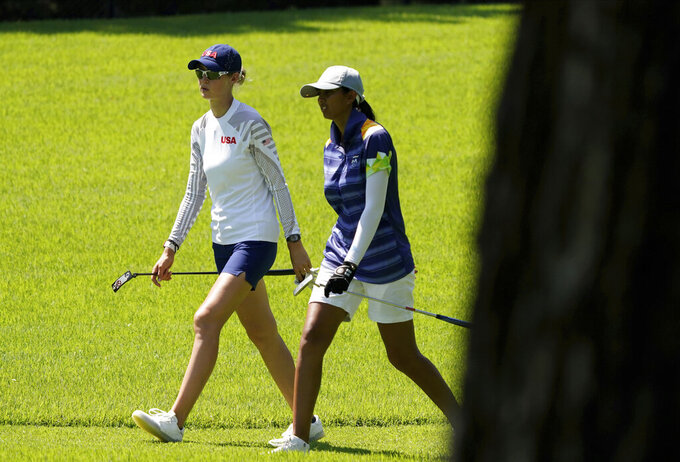 Nelly Korda, of the United States, left, and Aditi Ashok, of India, speak on the fourth fairway during the third round of the women's golf event at the 2020 Summer Olympics, Friday, Aug. 6, 2021, at the Kasumigaseki Country Club in Kawagoe, Japan. (AP Photo/Matt York) 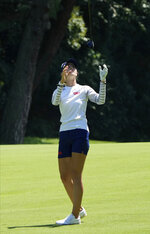 KAWAGOE, Japan (AP) — Seven holes into the third round of Olympic women's golf, Nelly Korda was making it look easy.

She made three birdies, at one point stretching her lead to five shots. The one time she was out of position, the 23-year-old American blasted out of a bunker right of the green on the par-3 seventh and it hit the pin for a tap-in par.

One hole changed everything but the name atop the leaderboard.

Korda survived a battle with her swing, closed with 12 straight pars for a 2-under 69 and held a three-shot lead going into the final round in her pursuit of a gold medal.

“I didn't have a really good back nine. I was kind of spraying it all over the place. I had some testy par putts,” Korda said. “But made all pars and I fought really hard to stay in it really, or ahead of it.”

She was ahead by three shots over Aditi Ashok of India, who is nearly last in the 60-player field driving and near the top in sheer determination. She had a 68.

And for now, there will be a final round at Kasumigaseki Country Club.

Olympic golf officials plan to start play as early as possible Saturday and take advantage of a window they hope is big enough to squeeze in 72 holes before a tropical storm in the forecast arrives.

Korda had made birdie on every par 5 for the tournament and had 80 yards to the pin for her third shot at the par-5 eighth. But she hit a clunker that rolled down the ridge 50 feet away, left that some 10 feet short and three-putted for bogey.

From there, it was a grind.

“There’s something inside of me when I bogey a par 5 that I just get so frustrated about because I shouldn’t be doing that,” Korda said. “But I kept telling myself that there’s more opportunities ahead.”

She just didn’t capitalize on them.

Korda had a tough bunker shot she failed to convert on the par-5 14th. She was finishing swings with one hand on the club. She drove to within 90 yards of the 17th green and had to make a 5-foot putt for par. She finished with a nifty pitch from behind the 18th green for par.

She let out a sigh when her final par putt dropped. This was a day when her swing was off and she managed to hold it together.

Korda was at 15-under 198 as she tries to add a gold medal to a year in which she won her first major and reached No. 1 in the world.

Behind her was another fight shaping up for the bronze.

Mone Inami of Japan, given the honor of hitting the opening tee shot, missed a 7-foot par putt on the final hole for a 68. She was five shots behind in a four-way tie for third with Ko (66), Hannah Green of Australia (67) and Emily Kristine Pedersen of Denmark (70).

Inami said she spoke briefly to Hideki Matsuyama, who was eliminated in a seven-way playoff for the bronze in the men's tournament.

“He said that because he wasn’t able to win the medal on the men’s side he wished us good luck on the women’s side,” she said.

The scenario was far different from last week with the men's competition, when eight players were separated by four shots going into the final round. Outside of Ashok, the closest players to Korda were five shots back.

One of them was Ko, the silver medalist from Rio de Janeiro, who mentioned how Minjee Lee came from seven behind on the final day to win the Evian Championship two weeks ago for her first LPGA major.

“You can never give up. I think it doesn't matter how many shots back you are,” Ko said. “Rory Sabbatini shot 10 under on the last day last week to become the silver medalist. Sometimes I just don't think you can count yourself out of it.”

At least there's a reasonable chance, thanks to Korda not making another birdie after No. 6.

Ashok stayed close, even after a bogey from the bunker on No. 9 and a three-putt bogey from some 60 feet on the 11th hole.

She holed birdie putts of 18 feet and 15 feet on the last four holes, and her nervy par on the 18th kept her in range of Korda, with high hopes for bringing home a medal.

“One more day of golf and a lot happens on the final day,” Ashok said. “Sometimes the final day, although it’s just one round, it feels long mentally. So definitely staying patient, and hoping we have good weather and hope I play good tomorrow.”

Officials have said they would have to revert to a 54-hole tournament if storms make it impossible to finish — the forecast is even worse for Sunday, the day the Olympics close.