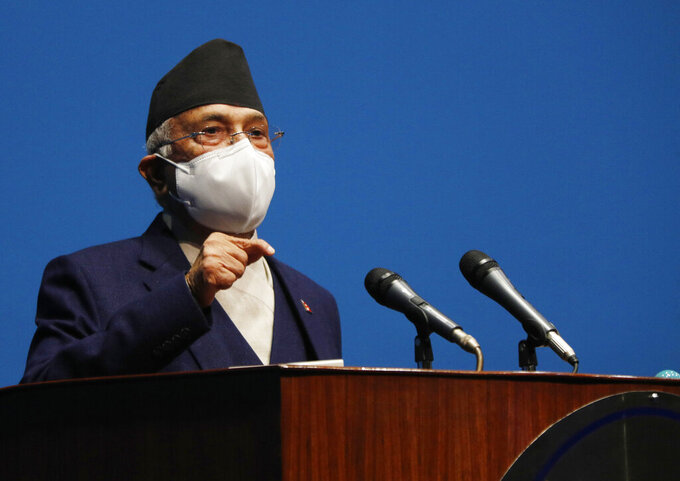 Nepal Prime Minister Khadga Prasad Oli speaks at the parliament in Kathmandu, Nepal, Monday, May 10, 2021. Oli asked parliament for a vote of confidence on Monday in an attempt to show he still has enough support to stay in power despite an expected second split within his governing party. (AP Photo/Niranjan Shrestha)

KATHMANDU, Nepal (AP) — Nepal’s ousted prime minister, who lost a vote of confidence in Parliament earlier this week, will stay in office as the leader of a minority government after political parties couldn't agree to a coalition.

Khadga Prasad Oli still must prove he has majority support of lawmakers within a month — a struggle since his own party has split and other parties are unwilling to support him.

Oli will head a minority government because his party is still the biggest one in Parliament, according to a statement late Thursday by President Bidhya Devi Bhandari's office.

Oli became prime minister after his Nepal Communist Party won two-thirds seats in the 2017 parliamentary elections. The strong support gave people hope of a stable, long-lasting government that would work on developing the country, but his party split earlier this year over differences on party leadership. The emergence of another rebel faction within the party led to Oli's defeat in a confidence motion in Parliament on Monday.

Oli has been criticized as giving attention to the party squabbles instead of to the coronavirus pandemic.

Nepal has seen its highest daily numbers of infections and deaths this month while hospitals are running short of treatment space and oxygen.

His government has imposed lockdowns to try to curb infections but failed to work on preparations for further outbreaks. The latest lockdown, in effect since last month, has been extended to the end of May.