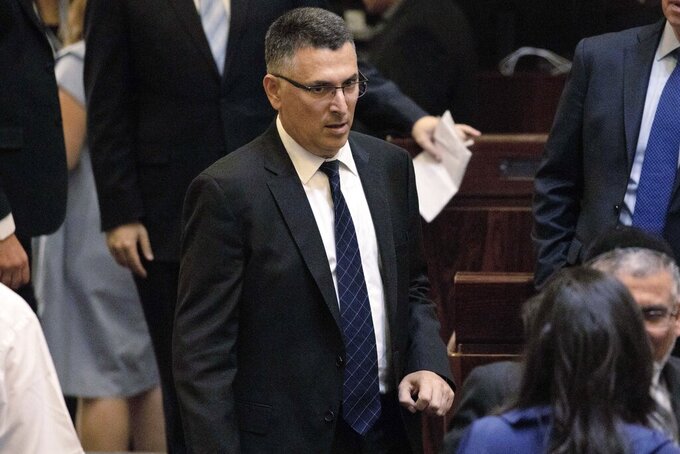 FILE - In this Thursday, Oct. 3, 2019 file photo, Gideon Saar, attends the swearing-in of the new Israeli parliament in Jerusalem. Saar, the leading rival of Prime Minister Benjamin Netanyahu inside the ruling Likud party, announced on Tuesday, Dec. 8, 2020 that he was breaking away to form a new political party ahead of elections expected early next year. (AP Photo/Ariel Schalit, File)

JERUSALEM (AP) — Gideon Saar, the leading rival of Prime Minister Benjamin Netanyahu inside the ruling Likud party, announced on Tuesday that he was breaking away to form a new political party ahead of elections expected early next year.

In a statement broadcast on national television, Saar said that Netanyahu had bungled the management of the health and economic crises stemming from the coronavirus pandemic and had turned the Likud into a tool for personal survival at a time when he is on trial for corruption charges.

Saar said that he could not serve under Netanyahu any longer and would seek the prime minister’s post himself as the head of a new party.

“A change in the country’s leadership is needed,” Saar said. “Today, Israel needs unity and stability. Netanyahu can’t, and won’t be able to, provide either.”

But like other Likud members who have risen too fast, he began to be perceived by Netanyahu as a threat. He took a break from politics in 2014, then returned to the Likud last year, only to be trounced by Netanyahu in a party primary.

While Saar seems unlikely to be a major contender for prime minister in the next elections, he could siphon off votes of nationalist voters who have grown unhappy with Netanyahu. That could complicate Netanyahu’s task of forming a new coalition if a vote is held.

In a statement, Likud said Saar was leaving because he was disappointed over his loss in the primary vote and had seen his popularity plunge in internal party polls.

Netanyahu this year formed a coalition with his main rival, Blue and White leader Benny Gantz, with the stated aim of managing the coronavirus crisis. But their partnership has been plagued by mistrust and paralysis.

Gantz last week voted in favor of a preliminary motion to dissolve parliament and hold new elections. Although last ditch negotiations are taking place to save the coalition, parliament is expected to make a final decision this month on what would be the fourth national election in just two years.