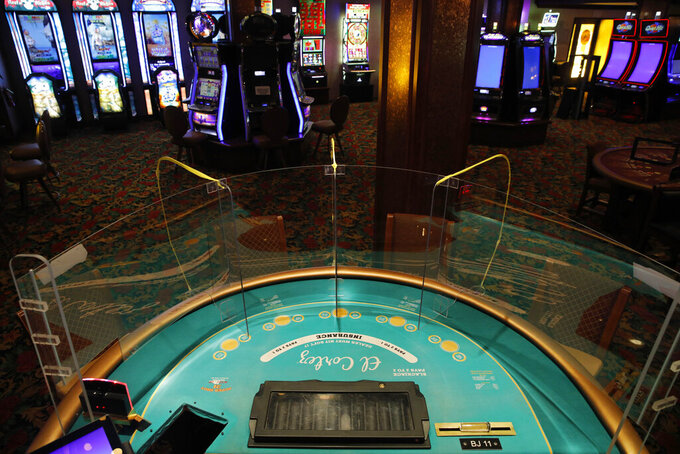 FILE - In this May 13, 2020, file photo, an acrylic gaming barrier is installed at a gaming table to protect people from the coronavirus at the El Cortez hotel and casino as it remains shuttered due to the coronavirus in Las Vegas. Nevada gambling regulators said Tuesday, May 26, 2020, they may require the state's shuttered casinos to test all "front line" resort workers for COVID-19, enact steps to prevent of the spread of illness and plan to isolate visitors and guests found to have the virus in order to get the OK to emerge from the coronavirus shutdown. (AP Photo/John Locher, File)

The promotions began the morning after Gov. Steve Sisolak lifted the casino shut-down order he imposed in mid-March to prevent people from spreading the coronavirus.

“It’s on us,” Derek Stevens, owner of the D Las Vegas, Golden Gate Hotel & Casino and Circa Sports said in a 30-second video about his airline ticket giveaway that doesn't require bookings at his properties. “Las Vegas needs you.”

Not all properties will open at first and business will probably start slowly, said Virginia Valentine, president of the Nevada Resorts Association. Nightlife will be limited.

Casino giant MGM Resorts said it will reopen its Bellagio, New York-New York and MGM Grand resorts, and its Signature gambling-free towers. Caesars Entertainment will reopen Caesars Palace and the Flamingo in Las Vegas and its Harrah’s properties in Lake Tahoe and Laughlin. The Cosmopolitan emphasized its open-air balconies over the Las Vegas Strip.

Las Vegas Sands Corp. said its Venetian will open first, and its Palazzo tower at a later date.

“I think it will ramp up as people come back, locals and drive-ins first and then air travel,” Valentine said. “There’s been a lot of careful, thoughtful planning going into this reopening. It’s going to be important that we get it right.”

The Hard Rock Hotel & Casino at Lake Tahoe began offering rooms for $20.20 a night in a promotion marking the return of gambling that was shut down statewide for the first time since legalization in 1931.

Some employers have said their workers will be required to wear facial coverings. Regulators want masks available and encouraged for customers on request.

Wynn Resorts, which announced plans more than a month ago for thermal imaging of employees and guests at all entrances, said it will open both of its Las Vegas Strip towers beginning June 4, including beauty salon, barber shop, spa and fitness center amenities.

Hotel guests will be temperature-screened to identify if they have a fever, generally registering 100.4 degrees Fahrenheit (38 Celsius) or higher. The Gaming Control Board said guests will be required to complete a symptoms self-assessment at check-in, and resorts must have a medical professional on site.

Sisolak announced the opening date after learning Tuesday that he’d visited a workplace last week where an employee who was not there at the time later test positive for COVID-19. He said he has shown no symptoms of the virus and said he was awaiting test results.

He cited a 35-day decline in the rate of new cases of COVID-19 and said the state is ramping up testing and contact tracing, and has hospital capacity to handle cases that emerge. Health officials report the virus has infected more than 8,100 people in the state and killed at least 396, mostly in the Las Vegas area.

Sisolak also approved in-person religious services for up to 50 people starting Friday. The governor, a Democrat, drew a Trump administration warning this week about his ban on religious gatherings of 10 or more people.

Nick Trutanich, U.S. attorney for Nevada, and Eric Dreiband, assistant U.S. attorney general for civil rights, commended Sisolak for “extending religious freedom protections.” They pledged their cooperation in a joint statement Wednesday “as we work to balance civil liberties and public safety through the process of reopening.”

Regulators said all front-line resort workers should be screened for COVID-19 before returning from furloughs and plans should be in place to isolate infected visitors.

Casinos will encourage hand-washing and offer hand sanitizer while limiting guests to 50% of fire code capacity in gambling areas, restaurants and stores. Swimming pool lounge chairs will be spaced apart.

Gamblers will be limited to three at blackjack and other table games, four at roulette, six at craps. Some resorts plan to disinfect dice between shooters, clean chips periodically and change card decks frequently. Some will encourage the use of cellphones for touchless check-in, as room keys and to read restaurant menus.

Smoking will still be allowed, the Gaming Control Board said.

For most people, the virus causes mild or moderate symptoms that clear up in two to three weeks. Older adults and people with existing health problems can face more severe illness including pneumonia and death. The vast majority of people recover.