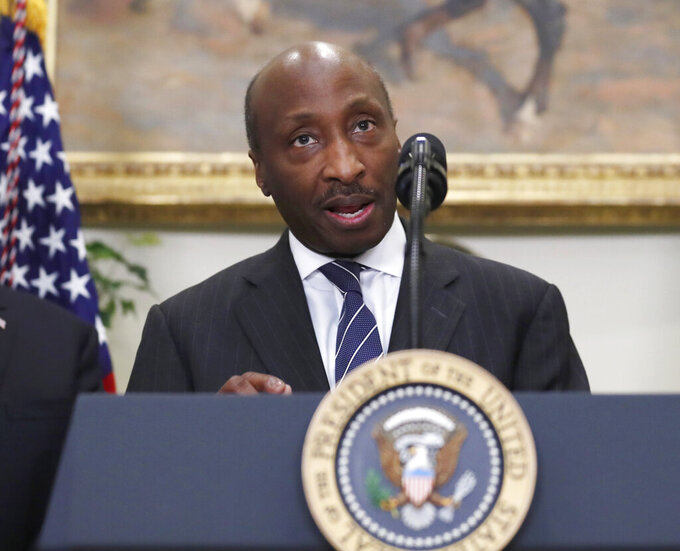 FILE - In this July 20, 2017 file photo, Merck CEO Ken Frazier speaks in the Roosevelt Room of the White House in Washington. Merck is entering a new era, with sweeping changes across its executive suite and the spinoff off its women's health and other businesses, a bid to enable both resulting companies to grow faster. The massive management makeover, mostly triggered by Frazier's upcoming retirement, occurs as the drugmaker says hits to sales of many of its medicines amid lockdowns and other impacts from the coronavirus pandemic will lessen and sales will rise over the rest of the year. (AP Photo/Alex Brandon, File)

Merck is entering a new era, with sweeping changes across its executive suite and the spinoff off its women's health and other businesses, a bid to enable both resulting companies to grow faster.

The massive management makeover, mostly triggered by longtime Chief Executive Ken Frazier's upcoming retirement, occurs as the drugmaker says hits to sales of many of its medicines amid lockdowns and other impacts from the global coronavirus pandemic will lessen and sales will rise over the rest of the year.

Frazier, who has run Merck & Co. since January 2011, oversaw a quadrupling of revenue and Merck's emergence as a powerhouse in cancer drugs over the decade.

Now 66 and the only Black CEO of a major drugmaker, Frazier will retire on June 30, causing a domino effect of job changes. He'll be succeeded by Chief Financial Officer Rob Davis, who will be replaced by company treasurer Caroline Litchfield. Her replacement hasn’t been named yet.

Michael Nally, head of marketing for Merck’s huge prescription drug business and a candidate to replace Frazier, departed last month. The chief commercial officer for that business, Frank Clyburn, will become its president and lead both commercial strategy and marketing.

On Thursday, Merck reported its first-quarter profit dipped 1% as people continued to put off doctor and hospital visits early this year due to the COVID-19 pandemic, and it spent more on research and production.

“Results were disappointing relative to expectations," Edward Jones analyst Ashtyn Edwards wrote to investors, noting lower rates of new diagnoses, such as for cancer, “were greater than expected during the first quarter.”

Even though Merck maintained its 2021 profit forecast, its shares plunged more than 5%.

The drugmaker said it's focusing its efforts on fighting the pandemic on two fronts: testing of its experimental COVID-19 treatment molnupiravir with partner Ridgeback Biotherapeutics, and helping to manufacture Johnson & Johnson's COVID-19 vaccine under a recent deal. The J&J partnership follows the failure of two experimental vaccines that Merck dropped after early results showed they weren't very effective.

Merck plans to soon begin late-stage testing of molnupiravir, a pill meant for treating outpatients to prevent hospitalizations. The company, based in Kenilworth, New Jersey, also is evaluating the drug's potential for preventing infection in people recently exposed to the COVID-19 virus.

Frazier told analysts on a conference call to discuss the results that he’s confident in Merck’s future and new leadership.

Merck’s prescription drug sales were hurt by generic competition to several drugs, and the pandemic reduced sales of doctor-administered drugs and other medicines used in hospitals, a key business for Merck. Sales of Merck’s vaccines for children and adults fell as the country focused on a massive COVID-19 vaccination campaign under the new Biden administration.

Prescription drug sales were flat at $10.68 billion, led by cancer immunotherapy Keytruda, which hauled in $3.9 billion — nearly one-third of total revenue. Januvia and combo drug Janumet for Type 2 diabetes brought in a total of $1.3 billion.

During the quarter, Merck started a partnership with Gilead Sciences developing long-acting HIV treatments that combine one drug from each company. And on April 1, Merck completed the acquisition of Pandion Therapeutics, a developer of therapies for autoimmune disorders, an area where Merck hopes to expand.

In addition, during the quarter the U.S. Food and Drug Administration approved new heart failure drug Verquvo and began reviewing applications to approve three experimental drugs, for chronic cough, for a rare condition associated with kidney cancer and for an improved pneumococcal vaccine.

Merck plans on June 2 to complete the spinoff of its Organon women’s health business, which will now also include off-patent former blockbusters like respiratory drugs Singulair and Nasonex, plus Merck’s unit that makes biosimilars, or near-copies of pricey biologic drugs.

If the spinoff happens by then, Merck plans to update its financial forecasts.