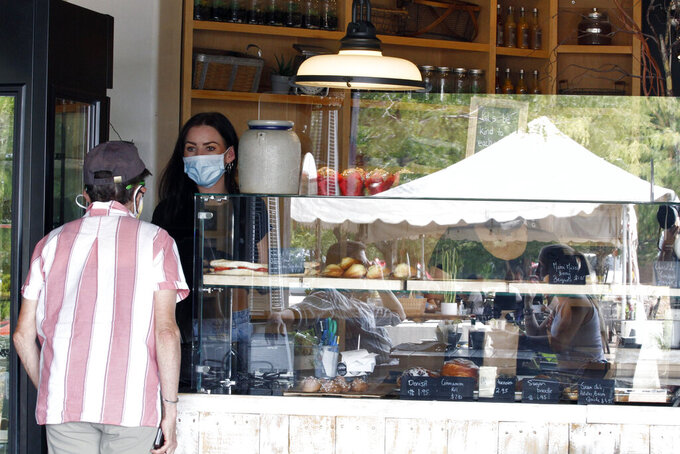 FILE - This Aug. 24, 2020 file photo Marylou Ligier takes a to-go order to a patron at her family's restaurant and pastry shop Clafoutis, in Santa Fe, N.M. New Mexico officials say they're "tightening" the definition of essential businesses to exclude some large retailers who sell some essential supplies, as the state reports a record-high number of COVID-19 cases for the second day in a row. (AP Photo/Cedar Attanasio, File)

SANTA FE, N.M. (AP) — A bill is on its way to the governor that would provide a four-month tax holiday to restaurants and a $600 rebate to low-income workers.

The state House gave final approval Wednesday to a pandemic economic relief bill on a 66-1 vote.

The bill calls for a $600 tax credit or rebate for people earning about $15 an hour and works as a rebate to those who owe less than $600 in taxes. Republicans first suggested the financial aid during a special legislative session last year.

Other proposed relief measures would channel $200 million in grants to businesses who lost income during 2020 amid the pandemic and aggressive emergency health restrictions.