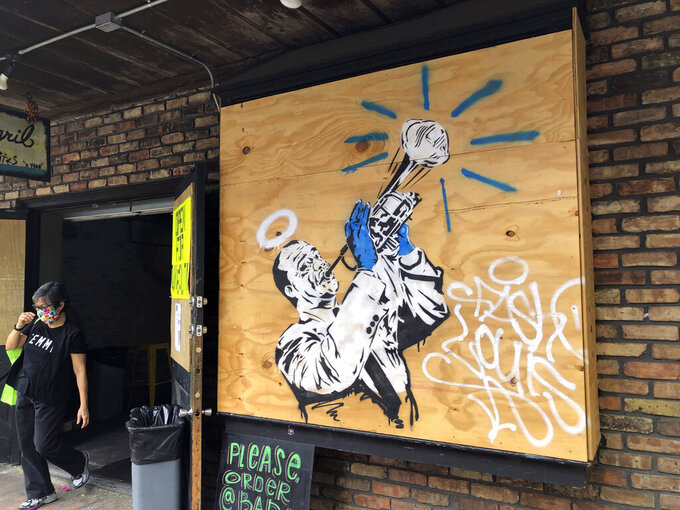 A woman walks out of a restaurant on Frenchman Street in New Orleans, Friday, May 15, 2020, next to a boarded up window that has been decorated with a painting of musician Louis Armstrong. The clubs and restaurants that are usually packed with people listening to music are closed as the city has fought to slow the spread of the coronavirus. (Rebecca Santana/AP Photo)

NEW ORLEANS (AP) — After weeks of shuttered businesses and houses of worship, New Orleans took its first steps Saturday to loosen restrictions in place for two months to slow the spread of the coronavirus.

The rest of the state took that step Friday with many businesses and houses of worship allowed to reopen at 25% capacity. New Orleans is slightly more restrictive. In addition to the 25% capacity restrictions, restaurants and certain other businesses such as nail salons are also required to take reservations. The city has also imposed caps designed to keep houses of worship and movie theaters at fewer than 100 people. Casinos, video poker, live entertainment and bars are still closed.

Restaurants weighed reopening with some deciding to try and others sticking to takeout or staying closed all together.

The eatery offers breakfast, brunch and lunch options to customers.

“We had some folks standing in line before we opened at 8 a.m., which was really great,” Weishaupt said. “But it's been mixed and wasn't as busy as we anticipated because of the weather.”

Rain fell in parts of south Louisiana as a storm moved from the west, meteorologists said.

“There are a lot of things for our staff to learn and get used to, particularly in New Orleans, where the most stringent rules are in force, like requiring guests to wear face masks and for us to take people's names,” Weishaupt said. “There's been no pushback, so far, but we have been getting some funny names so it could become an issue later.”

Despite the constraints, Weishaupt said they're excited about reopening the cafe's doors.

“We’re cautiously optimistic,” she said. “We've had a steady stream of customers and we've seen a lot of regulars and it's been nice to reconnect with them.”

Kirk Estopinal, one of the owners of Cane & Table in the French Quarter, opened Saturday afternoon after the two-month forced hiatus. To reduce contact as much as possible, guests can order their food when they make a reservation online, they’re asked to wear masks when they come and the staff will do the same. Cleaning will be stepped up, and bathrooms cleaned after every use.

“We’re going to trial run what it is to operate in the new normal,” he said. “We’re looking at a restaurant experience that is almost touch-less for our guests.”

Estopinal said the traffic in and out of the restaurant Saturday has been “nice and steady.”

“We really like having everything through the reservation process,” he said. “That's been nice and controllable.”

Other restaurants are choosing not to open just yet to dine-in service. Cowbell, a casual eatery near the Mississippi River said on a social media posting that it would stick to take-out: “We feel the size and structure of our facility would prove difficult to ensure the safety of all parties and the safety of our employees remains our first priority.”

In March, the state was a hot spot for the virus and there were worries that cases of the disease it causes, COVID-19, would overwhelm the state health system. The number of confirmed cases still grows daily, with more than 34,100 reported as of Saturday. But hospitalizations have trended steadily downward since early April and the percentage of new cases relative to the number of tests is declining. At least 2,413 virus-related deaths have been reported in the state.