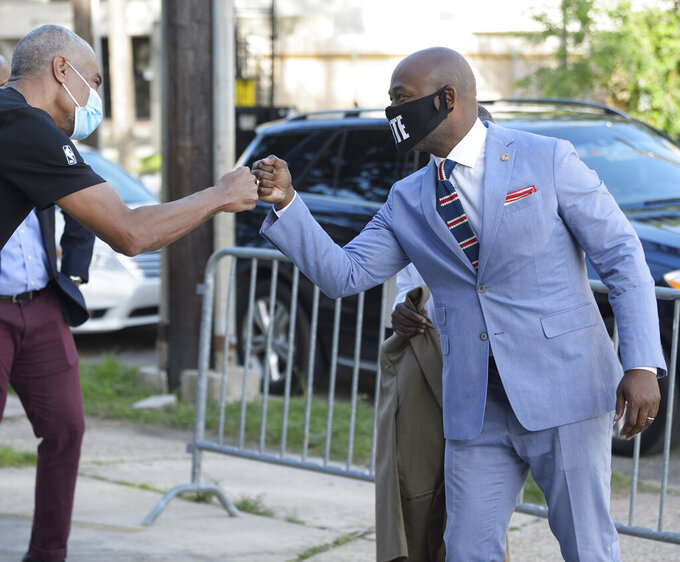 FILE - In this Wednesday, July 22, 2020 file photo, New Orleans City Councilperson Jason Williams arrives at the Clerk of Criminal District Courts to qualify for the Orleans Parish DA race in New Orleans, La. Jason Williams takes the oath of office as the city’s new district attorney on Monday, Jan. 11, 2021 facing budget challenges, a pandemic-related backlog of cases and high expectations from criminal justice reform advocates who rallied around his campaign — despite his indictment on federal tax charges. (Max Becherer/The Advocate via AP, File)

NEW ORLEANS (AP) — A New Orleans city council member took the oath of office as the city’s new district attorney Monday, facing a pandemic-related backlog of cases and high expectations from criminal justice reform advocates who rallied around him — despite his indictment on federal tax charges.

Jason Williams vowed in his inaugural speech to hold those guilty of serious crimes accountable. But he repeatedly stressed the need — in a city with a high incarceration rate and a high percentage of Black prisoners — to stop seeking jail time for people whose crimes are related to poverty, drug addiction or mental illness.

“We have normalized criminalizing behaviors associated with simply being poor, like addiction, like acting out because of mental illness," Williams said. “If we can give people ways to thrive, tools instead of trapdoor, no matter how mad we are at them, we won't have the most racist system in the state.”

A defense attorney by trade, Williams had served on the council since 2014. He took the oath after testimonials from local luminaries including historian and author Walter Isaacson, and after a performance by musician Glen David Andrews. The renowned singer and trombonist, who has had multiple run-ins with the law, thanked Williams for “helping me get to a better place.”

Williams was sworn in at a limited-attendance ceremony streamed online due to the COVID-19 pandemic.

He took over an office he sought after fiercely criticizing the hardball tactics of the outgoing incumbent, Leon Cannizzaro, who did not seek re-election.

Williams ran despite being indicted in the summer on federal felony charges accusing him of tax fraud — accusations he said were ginned up by prosecutors for political reasons. His motion to have them dismissed was rejected in a ruling issued Friday at federal court. Last month, pandemic-related complications prompted the judge to delay proceedings — including a trial that was supposed to have started the same day Williams was being sworn in.

Williams won a December runoff with 58% of the vote, despite the hovering court case.

“Its one of those things in New Orleans where folks were a little cynical of the indictment,” said Derwyn Bunton, a public defender who ran unsuccessfully for judge last year. “Folks were willing to give him a chance.”

“The DA-elect has been pretty clear about this,” Williams spokesman Tyronne Walker said Friday. “He believes that there is a better chance of him being hit by a car or a bus than being convicted in this case because he’s innocent.”

Cannizzaro served two six-year terms as district attorney. He was credited by Rafael Goyeneche, a former prosecutor who heads the nonprofit watchdog Metropolitan Crime Commission, for improving communication between police and prosecutors when he took over 12 years ago. Goyaneche is adopting a wait-and-see attitude toward Williams.

“I want to hear what Jason’s agenda is going to be and how he’s going to go about reforming, as well as what he’s going to do to protect the public,” Goyaneche said Friday.

Williams' job also will be complicated by the coronavirus pandemic that has delayed jury trials and complicated the scheduling of hearings for criminal suspects.

This, as violent crime rates have increased. There were 202 homicides in the city in 2020, a 71% increase over 2019, according to police department statistics.

And then, there is the federal tax case.

In refusing to dismiss the case Friday, U.S. District Judge Martin Feldman said Williams and a co-defendant law partner had failed to prove that federal prosecutors sought to charge them because Williams was a public official running for office or because Williams is Black.

Feldman, however, did give credence to the defense’s point that other clients of a tax preparer at the center of the case — Henry Timothy, who pleaded guilty last week to tax fraud — were not being prosecuted.

“To be sure, the defendants have persuaded the Court that it is curious and troubling that, to date, the government has failed to or opted not to investigate either Timothy’s conduct in preparing his clients’ returns or his other clients’ conduct in the preparation of their returns,” the judge wrote, adding that the decision will be “fair game” for defense attorneys.