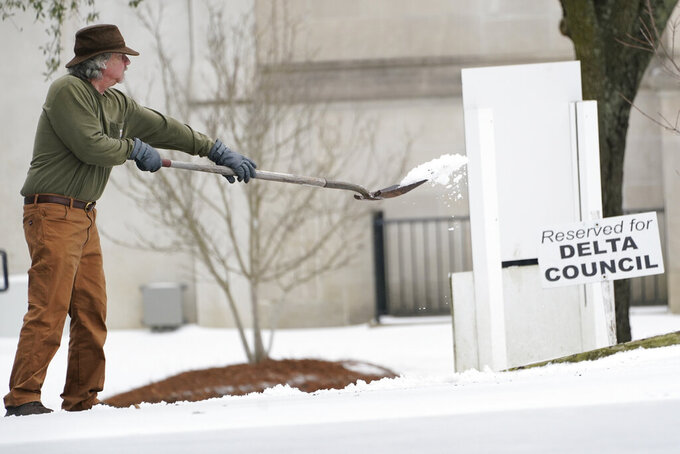 A Jackson, Miss., resident shovels ice and snow from a driveway, Wednesday, Feb. 17, 2021, as light snow mixed with sleet, and rain continue to cover much of the state. The National Weather Service in Jackson has issued a winter storm warning for parts of Mississippi effective 6 a.m. Wednesday ahead of another storm system set to impact the region. (AP Photo/Rogelio V. Solis) 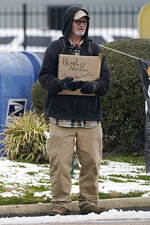 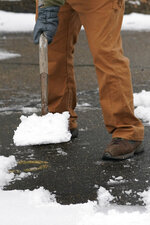 BATON ROUGE, La. (AP) — Parts of the frigid Deep South got more snow and ice Wednesday, adding to problems in a region where wintry precipitation already had left thousands without power, stranded drivers on slick roads and interrupted efforts to vaccinate people against the coronavirus.

A winter storm warning and advisories that reached all the way from the Mexican border to the Washington, D.C., area included most of Louisiana and Mississippi, northwestern Alabama and slivers of northern Georgia and South Carolina. As much as 4 inches (10 centimeters) of snow and sleet could fall as far east as Alabama, forecasters said.

Louisiana Gov. John Bel Edwards said that while southern parishes were starting to thaw and part of Interstate 10 was reopening, the whole state was struggling with the effects of the winter weather: Hundreds of wrecks, power outages and crippled water systems.

“There are challenges literally all over the state of Louisiana right now,” Edwards said on his monthly radio show. In the southwest Louisiana city of Lake Charles, which was hit by two hurricanes last year, Mayor Nic Hunter said hospitals may have to transfer patients to other areas because of low water pressure.

Mississippi Gov. Tate Reeves said Wednesday that the Highway Patrol had worked more than 1,110 wrecks from Sunday through Tuesday. Reeves said the entire state is facing weather challenges in coming days, including ice, snow and the possibility of hail or tornadoes.

Extreme cold weather caused water-pressure problems in Mississippi’s capital of Jackson, where the city told customers to boil water as a precaution, and roads remained icy in much of the state.

A University of Mississippi Medical Center emergency room nurse, Matt Harris, and one of his former colleagues, Tony Sistrunk, stopped on Interstate 55 in Jackson on Wednesday and spent more than an hour using Harris's pickup truck and a strap to pull cars that couldn't gain traction on the icy roadway.

“I felt like I was mud-riding back in the day with my brother and his friends, and having to pull people out of the mud," Harris said in a news release from the medical center.

Many people in Mississippi remained home because some schools and businesses were closed.

“The side benefit is, I do think that this is going to help drive down our COVID numbers,” said the state's chief health official, Dr. Thomas Dobbs. “This is kind of a forced shelter-in-place sort of scenario.”

In icebound northwest Alabama, the only grocery store in tiny Hackleburg opened Wednesday since the power was back on and roads were clear enough for travel, manager Dennis Whitfield said in a telephone interview over the buzz of busy checkout lanes. Milk, produce and bread were in short supply since trucks can't get to town from Birmingham, nearly 100 miles (161 kilometers) away, he said.

With more snow and ice in the forecast, Whitfield said he was not sure how Hackleburg Market and Town Cafe could remain open.

“We’re telling people we’re here until it starts again," he said. "The people who work here and these people’s lives are more important than getting a gallon of milk.”

Nearly 115,000 utility customers were in the dark in Louisiana, including about 21,000 in East Baton Rouge Parish, and more than 40,500 were out in Mississippi. One of the largest utility providers, Entergy, had rolling blackouts and implored customers to reduce their use of electricity. In some places, temperatures were not predicted to go much above freezing for an extended period until Friday.

Snowy and icy weather forced some communities to postpone pandemic vaccination drives in Georgia, Louisiana, Mississippi and Alabama, officials said, and delayed shipments in some places.

The Georgia Department of Public Health said in a statement that vaccines that normally would have arrived the first part of this week were held back by the manufacturers due to the weather. The agency said health departments and other vaccine providers have been forced to reschedule appointments.

Vaccine shipments have also been delayed to a large part of Alabama because the shipper, McKesson Corp., has weather-related problems at its terminal in Memphis, Tennessee, said Ryan Easterling, a spokesman with the Alabama Department of Public Health.

For some, the weather prompted acts of charity.

In Clinton, Mississippi, Army veteran Evelyn Fletcher spent the last few days cooking all the food in her house to make plates to deliver to sidelined truck drivers, travelers and people staying at hotels because they lost power at home.

On Monday, Fletcher made 85 meals. On Tuesday, a local restaurant, T’Beaux’s Crawfish and Catering, cooked 75 plates of shrimp and gumbo for her and other volunteers to deliver and she made 30 plates of her own. On Wednesday morning, Fletcher was cooking a pot of turkey noodle soup so she could go out again and deliver another 70 meals as the weather allowed.

“People are worried about more snow,” she said. “We are going to keep people fed and keep them feeling hopeful.”