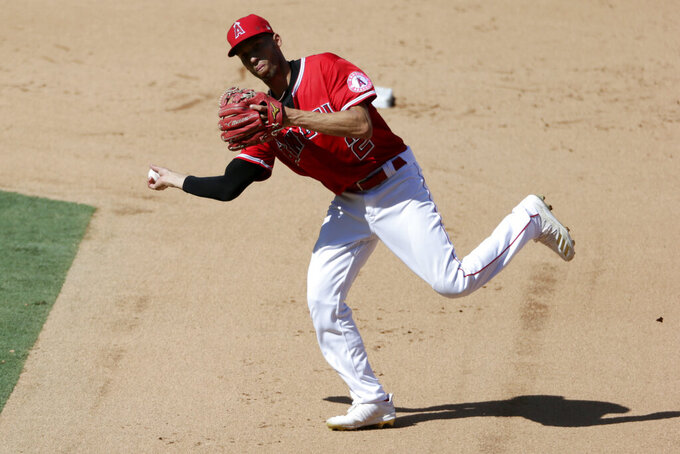 FILE - Then-Los Angeles Angels shortstop Andrelton Simmons throws to first to get Texas Rangers' Rougned Odor out on a ground ball during the sixth inning of a baseball game in Anaheim, Calif., in this Sunday, Sept. 20, 2020, file photo. After a travel documentation delay in his native country Curaçao, new shortstop Andrelton Simmons has finally settled in at spring training with the Minnesota Twins, who are getting a big boost to the left side of their infield from the 31-year-old glove whiz. (AP Photo/Alex Gallardo, File)

MINNEAPOLIS (AP) — The Minnesota Twins have been eagerly anticipating the addition of Andrelton Simmons to their infield this season.

Getting him and his renowned glove in camp was even worth an extra wait.

“It’s enjoyable to see a guy out there who can do things. He has his own style of playing shortstop, his own actions really that are unique to him, and he looked like he was doing great,” manager Rocco Baldelli said after observing Simmons in his first on-field workout with the team on Sunday.

The Twins were off on Monday from the Grapefruit League exhibition circuit, but not Simmons. He was slated for some catchup time at the spring training complex in Fort Myers, Florida. The native of Curaçao had been unable to leave the Caribbean island country until his travel documentation — the recent wave of extreme wintry weather delayed the paperwork — was fully processed. Then, of course, he had to clear COVID-19 protocols upon arrival at camp.

“I wouldn’t say stuck like that, because I was around family, so it was good,” Simmons said. “But I’m just happy everything got straightened out and I finally got to be with the guys.”

Visa holdups for major league players from foreign countries happen every spring, but the wait for Simmons was unusually long. He made the best of the situation by working out with his father and his brother to try to stay in shape, though facing live pitching was one part of the regimen that was missing. Simmons, who signed a $10.5 million, one-year contract with the Twins, now has a little more than three weeks to get his swing in shape for the season opener on April 1.

“Once I get into a game situation, that kind of jump-starts things a little more. The focus automatically increases. Whenever that happens, whenever I feel comfortable and the manager feels like he wants to put me in there, I’ll be ready to go and I’ll try to get locked in as soon as possible for everybody,” Simmons said.

Over five years with the Los Angeles Angels, Simmons batted .281, so he's no automatic out. The primary motivation for picking him up, allowing the more offense-oriented Jorge Polanco to move to second base, was clearly for the upgrade on defense from the four-time Gold Glove award winner.

“He’s an elite shortstop in our game, and I’m definitely excited to play alongside of him. I think that we’ll be able to make some nice plays throughout the year,” third baseman Josh Donaldson said.

Severe ankle sprains in each of the last three seasons limited Simmons' impact, costing him more than 100 possible games over that span, but he said Sunday he feels fresh. That goes for his mental health, too. Last month, soon after he signed with the Twins, Simmons told the Orange County Register that the reason he opted out of the final week of the Angels' schedule was because of severe depression and suicidal thoughts triggered in part by the off-the-field isolation of playing through the pandemic in 2020.

“It was a little difficult, but I think my wife helped me put it out there so I could be at ease and let it out in a sense. It helped me. I think people understand a little better now,” Simmons said. “I hope everything that was put out there was good and people understand what me and maybe some other people have to go through. I’m happy with how everything worked out.”