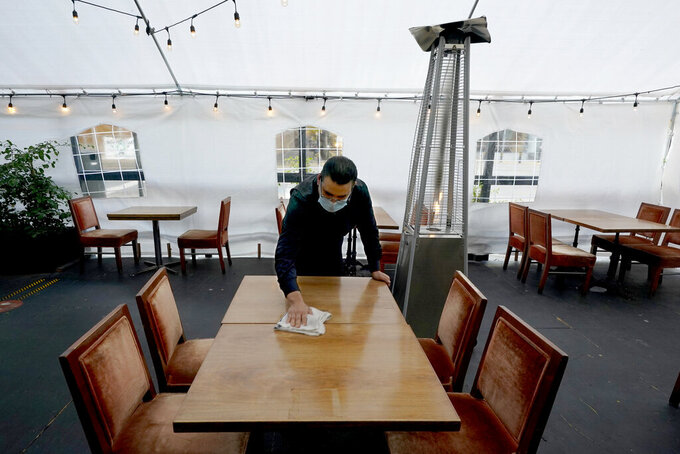 Fabian Rodriguez cleans a table in an outdoor tented dining area of Tequila Museo Mayahuel restaurant, in Sacramento, Calif., Thursday, Nov. 19, 2020. California's unemployment rate has dipped below 10% for the first time since March. A new report from the state Employment Development Department shows California added 145,500 jobs in October as the state's unemployment rate fell to 9.3%. Those gains could be short lived as a surge of cases has already prompted new restrictions on businesses with most restaurants ordered to halt indoor dining and impose a 10 p.m. curfew in most areas that begins Saturday. (AP Photo/Rich Pedroncelli)

SACRAMENTO, Calif. (AP) — California's beleaguered restaurant and hospitality industry rebounded in October, adding 66,000 jobs as the unemployment rate in the nation's most populous state dipped below 10% for the first time since the pandemic upended its economy in March.

But the gains are likely to be short-lived as a surge of cases has already prompted new restrictions on businesses, including forcing most restaurants to halt indoor dining during the cold and rainy winter months. Starting Saturday, the state will enforce a 10 p.m. curfew that could further curtail people's leisure spending.

“With the renewed lockdowns, these jobs are in peril now,” said Michael Bernick, an attorney and former director of California's Employment Development Department.

Overall, California added 145,500 nonfarm payroll jobs — with farmwork excluded because of its seasonal fluctuations — as the unemployment rate fell to 9.3% in October. It was the sixth consecutive month of job growth after the state lost more than 2.6 million jobs in March and April because of a statewide stay-at-home order prompted by the pandemic.

California has now gotten 44% of those jobs back, according to a report released Friday by the state Employment Development Department. But the report shows more than 1.7 million people are still out of work, up more than a million from this time last year.

“This fault line was present before the pandemic. It has grown during the pandemic,” Bernick said.

Gov. Gavin Newsom's administration has been pleading with people to follow public health guidelines, a message undermined by Newsom himself when he attended a birthday party at an expensive Napa county restaurant earlier this month. Friday, Newsom's Labor Secretary Julie Su took on the role of urging people to comply.

“California’s ongoing economic recovery depends upon each and every one of us doing our part,” Su said in a joint statement with Chris Dombrowski, acting director of the Governor’s Office of Business and Economic Development. “How we choose to navigate public and workplace interactions will have a direct impact on our loved ones, our communities, and our economy.”

While most accepted Newsom's restrictions in March, his latest order has received pushback from many parts of the state seven months into the pandemic. Assemblyman James Gallagher, a Republican from Yuba City, said the curfew and other new restrictions “will only further decimate struggling businesses that already face some of the toughest hurdles in the country.”

Newsom responded Friday by announcing a $175 million small business loan program backed by $75 million from the state. Dubbed the “California Rebuilding Fund,” it will offer loans of up to $100,000 to small businesses, giving companies up to five years to pay the money back at a 4.25% interest rate.

“Ensuring small businesses have access to capital will help stimulate economic growth across the state,” Newsom said in a news release.

The fund was the most significant recommendation from Newsom's glitzy Task Force on Business and Jobs Recovery, which was led by billionaire Tom Steyer and featured heavy- hitters like Apple CEO Tim Cook and all four living former governors. The task force concluded six months of work on Friday by issuing a 27-page report that outlined “principles" for the state to follow, including preserving “California's competitive edge” and continuing to “support essential workers.”

The jobs report is based on a survey conducted during the week of Oct. 12. Nine of the state's 11 industry sectors gained jobs. The biggest gains were the 66,000 jobs in leisure and hospitality, 35,800 jobs in professional and business services and 26,300 jobs in construction.

An estimated 750,000 Californians could lose their unemployment benefits in December as various federal government programs are set to expire, according to an analysis by the California Policy Lab.