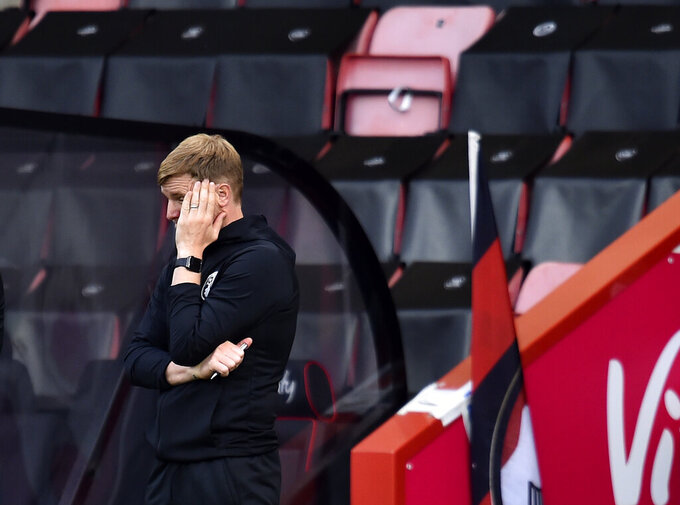 BOURNEMOUTH, England (AP) — Bournemouth stayed in the Premier League relegation zone after a 4-1 loss to Newcastle on Wednesday extended the team's winless run to seven games.

First-half strikes from Dwight Gayle and Sean Longstaff were followed up by substitutes Miguel Almiron and Valentino Lazaro, handing Bournemouth a club-record 19th loss in a top-division season.

The south-coast side is looking unlikely to extend its Premier League stay to a sixth season. The next four fixtures are against Manchester United, Tottenham, Leicester and Manchester City.

But Newcastle is 13th and seems sure of avoiding the drop.

Bournemouth fell behind inside five minutes. Jefferson Lerma was carelessly dispossessed on the edge of his own box by Longstaff and Gayle was sent clear by Allan Saint-Maximin to clinically find the bottom left corner.

The porous home defense was exposed for a second time with half an hour played.

Saint-Maximin was once again the provider, easily tricking his way past Adam Smith on the left and pulling the ball back for Longstaff to strike into the roof of the net from 10 yards (meters) for his first goal of the campaign.

Bournemouth failed to produce an attempt on target in the first half and was denied a flying start to the second by an offside flag.

Joshua King headed in after Dominic Solanke’s deflected strike came back off the left post but the effort was correctly ruled out.

Newcastle then further extended its lead in the 57th.

Almiron, who came on when Longstaff limped off injured shortly after scoring, collected Saint-Maximin’s pass and worked space on the edge of the box before stylishly finding the top left corner with a curling effort.

Lazaro converted in the 77th minute after being played through by Jonjo Shelvey.