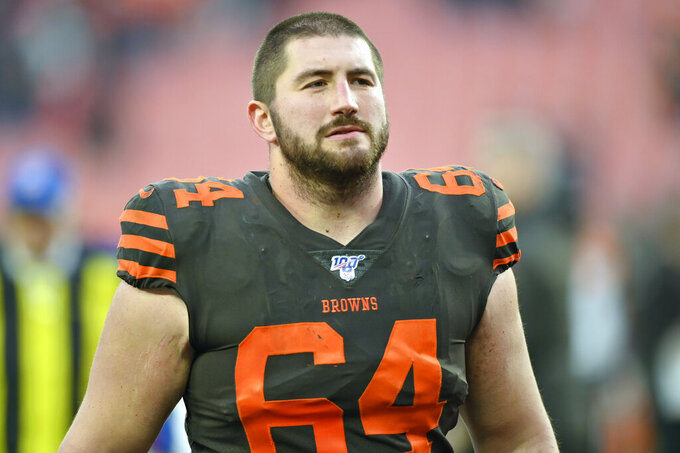 FILE - In this Dec. 8, 2019, file photo, Cleveland Browns center JC Tretter walks off the field after an NFL football game against the Cincinnati Bengals in Cleveland. NFLPA president JC Tretter warned players they have to "fight for necessary COVID-19 protections" and Malcolm Jenkins said "football is nonessential." With training camp less than a month away, some players are speaking out about concerns over playing football during a pandemic while others are ignoring medical advice and holding workouts with teammates. (AP Photo/David Richard, File)

Some NFL players are raising concerns about playing football amid the coronavirus pandemic while others are ignoring advice of medical experts by working out with teammates.

JC Tretter, a center on the Cleveland Browns and president of the NFL Players Association, wrote an open letter to players on Tuesday, saying they have to fight for “necessary COVID-19 protections.”

New Orleans Saints safety Malcolm Jenkins said last week that “football is a nonessential business and so we don’t need to do it.”

Pittsburgh Steelers defensive lineman Cameron Heyward has asthma so he wants to “take every precaution” if he plays.

“We are not invincible, and as recent reports have shown, we certainly aren’t immune to this virus,” Tretter wrote in his letter. “Underlying conditions like high BMI, asthma and sleep apnea are all associated with a higher risk of developing severe symptoms and complications when infected with COVID-19. Those conditions are widespread across the league. NFL players are humans — some with immuno-compromised family members or live-in elderly parents. Trust me: we want to play football. But as a union, our most important job is keep our players safe and alive. The NFLPA will fight for our most at-risk players and their families.”

The league informed owners last week that training camp is expected to open as scheduled later this month. Discussions regarding shortening the preseason schedule are ongoing and an announcement is expected soon.

Dr. Allen Sills, the league's chief medical officer, said he has regular communication with medical officers of other professional sports leagues and they are learning from one another.

“We’re approaching this as a medical and public health problem,” Sills said Wednesday. “This isn’t about one league having an advantage over another. We’re working together as a group of medical professionals saying how can we do the best job in taking care of our patients in creating the safest possible environments.”

The NFL and the Pro Football Hall of Fame already canceled the opening preseason game between Dallas and Pittsburgh set for Aug. 6. The hall’s induction ceremonies set for Aug. 8, and for mid-September for a special centennial class, were moved to August 2021, when the Cowboys and Steelers will play in the game.

“I want to play football. I think all my peers want to play football. It’s how we make a living,” Jenkins said in a video posted on Twitter. “But there’s so much that we don’t know right now. When we look at what’s happening in the country, cases are going up, projected deaths are going up. ... I know that the bar for the NFL is going to be high when it comes to creating a safe working environment and making it as safe as possible for guys to come back as we keep in mind it’s not just about the athletes and their health and the coaches and staff, but our families, too.”

Sills said information gathered from other sports leagues domestically and internationally will help shape the way the NFL approaches its season.

“I absolutely expect that our protocols will change and will evolve as we go through the regular season based upon some of this new knowledge,” Sills said. “That’s the nature of medical practice: that we’re always looking to improve based upon emerging knowledge and emerging data and those things will change. And so I don’t think none of us should be surprised by that and that’s part of our commitment on the health and safety side is to try to stay abreast of what’s happening in the medical fields and in the other sports leagues and continue to improve those protocols for the safety of everyone.”

Numerous players in the NBA, NHL and Major League Baseball have tested positive for COVID-19 as those sports have started preparations to return to play. Some players across those leagues have opted out, citing medical concerns.

“It is the responsibility of the employer to provide a safe work environment,” Tretter told NFL players. “I encourage all workers to hold their employers accountable to high standards. More so than any other sport, the game of football is the perfect storm for virus transmission. There are protections, both short and long term, that must be agreed upon before we can safely return to work. The NFLPA will be diligent as we demand that the NFL provide us the safest workplace possible.”

The NFL and the players’ union haven’t agreed yet on protocols to open training camps. Players are holding a league-wide call on Thursday to discuss the proposals.

Houston Texans wide receiver Randall Cobb wrote on Twitter: “I would advise everyone to get on this call to hear the plans so you’re informed and know what to expect going into camp.”'