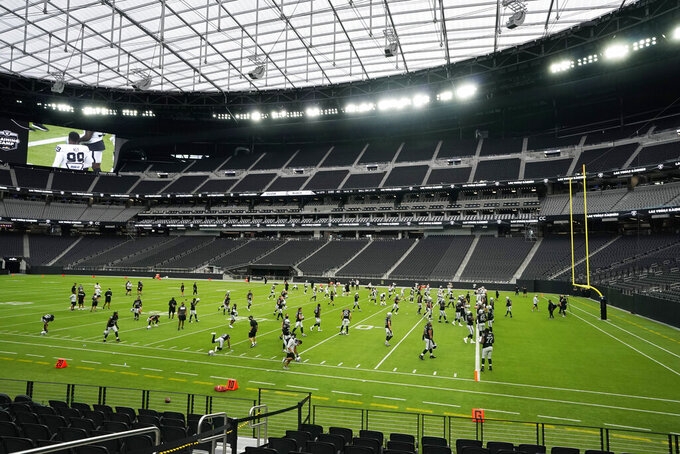 In a year in which few things are normal, there will be some familiar things about NFL broadcasts this season.

Announcers will be in the stadiums, pregame shows will have their usual fill of banter and debate and the regular season will start on time.

But will it translate to an increase in ratings for a third straight year? Opinions are mixed, but Neal Pilson, the former president of CBS Sports who now runs his own sports television consulting company, thinks there will be growth because of many factors.

“More people are home, all those that go to the game will be home watching which will add up in some markets plus there might not be as much group viewing,” he said.

Pilson also points to the NFL starting its regular season on time as another positive factor while the NHL and NBA are trying to complete their postseasons months later than they would normally finish.

Onnie Bose, the NFL's VP of Broadcasting, said they looked at how the other leagues approached things before coming up with their protocols. One of the advantages of football is that it is a tightly-shot sport, which can mitigate showing empty stadiums.

NFL Films will supply the crowd noise for games because of the lack of fans. They have been gathering multi-channel surround audio recordings from every NFL stadium for use in their productions over the past four seasons. The sounds will be fed to the broadcast by a league-hired operator who is following the game and using a button panel to control playback from custom-configured software.

Fan mosaic LED boards may also be used at some stadiums and bigger games.

“The way we are approaching audio will be unique and something that will stand out. It is something we take a lot of pride in,” he said. “The audio from Seahawks games will be from games the last four seasons.”

The league was hoping that extending the collective bargaining agreement with the NFL Players Association would pave the way to begin discussions with the networks about extending their rights deals. But then the coronavirus pandemic happened and that was put on the back burner.

The league and its network partners had preliminary discussions in June, but those talks could ramp up late in the season or early in the offseason, especially with the addition of a 17th regular-season game in the near future.

However, the league has already seen some extra money from the new CBA as NBC and CBS won the rights for two extra postseason games after the playoffs were expanded from 12 to 14 teams. ESPN's deal expires after 2021 while NBC, CBS and Fox are up after 2022.

The league already makes more than $7.5 billion annually from its rights deals. The revenue could nearly double with an extra week of regular-season games and expanded playoffs.

“As they come back they have the benefits of examining what worked and didn’t for other sports, and be in full assessment mode,” he said. “They perhaps have all that insight, but also a perfect market timing in my opinion, of all of this. Their visibility and awareness is going to benefit them in some type of financial capacity as it relates to collective bargaining with the networks. Don’t doubt the NFL is going to use this as leverage.”

PRESEASON MAKEUPS: The league will allow stations that have preseason broadcast rights with teams to re-air regular-season games in their markets. The move should allow some teams and stations to recoup some revenue lost from the lack of preseason games since that is where the greatest impact is felt. Usually, replays are only available on NFL Network or NFL Game Pass. The league has allowed teams during the preseason to re-air historic games from the league's archives.

TEST RUN: ABC will air its first “Monday Night Football” game since 2005 on Sept. 21 when the Raiders play their first game in Las Vegas against the New Orleans Saints. Not only is it the 50th anniversary of the first MNF game, but it could signal a return of the franchise back to ABC by 2022.

The biggest change in the upcoming rights deals could be Monday nights returning to ABC and ESPN going for the Thursday night games. Not only does the league want to be back on all four broadcast networks, but it would put Walt Disney Company back in the Super Bowl rotation by putting it on ABC.

“The NFL is not prepared to put the Super Bowl on cable. That would be deep trouble,” Pilson said. “If ABC wants Monday nights, they can get it and shift some of the dollars if ESPN continues with the NFL.”

ANNOUNCER SHUFFLES: As usual, ESPN's “Monday Night Football” leads the way as Steve Levy, Brian Griese and Louis Riddick take over. ... At CBS, Charles Davis joins Ian Eagle on the No. 2 crew after Davis spent 13 years with Fox. Trent Green moves to the No. 3 crew with Kevin Harlan while Rich Gannon goes to the fourth team with Greg Gumbel. ... Fox will move Daryl “Moose” Johnston to the second team with Kevin Burkhardt. Adam Amin and Kevin Kugler have been hired as play-by-play announcers while Jonathan Vilma and Greg Jennings are new analysts. Kugler was brought on after Thom Brennaman wasn't retained after using an anti-gay slur on air during a Cincinnati Reds broadcast last month.