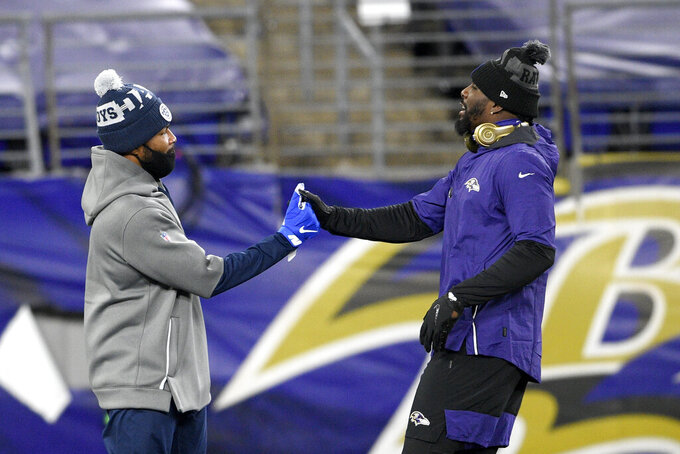 The NFL's medical director says all procedures followed before the Baltimore Ravens' game Tuesday night when receiver Dez Bryant tested positive for COVID-19 were done properly and in the same manner as for every case.

Bryant had an inconclusive test result after he was active for the game. He was removed from the field during warmups and tested again. The league and the Ravens then conducted contact tracing, but found no close contacts that would have caused an interruption in playing the game against Dallas, nor the removal of other players or team personnel.

“I made the final determination that there were no high-risk close contacts to the case, so there was no need to remove anyone else,” Dr. Allen Sills said Wednesday.

“I would say it was a very straightforward review simply because there were very few contacts identified by the data. I think that’s a reflection of the fact that this club has been under our intensive protocol and certainly has done a tremendous job with compliance around their facility leading up to the game ...

"So there were simply very few contacts to be reviewed, and with the cooperation of the player involved, we did not identify any other worrisome contacts.

“But the same exact process was followed in this case as we do in every case. We made that determination using the same group of people and the same process, and the fact that we were able to do it fairly quickly is not reflective a lack of thoroughness in the process. It’s just simply the amount of data to be sorted through that allowed us to do that.”

Baltimore, which won the game 34-17, couldn't replace Bryant on the roster.

“That was a big challenge. The timing of this thing, it’s a crazy kind of a deal,” Ravens coach John Harbaugh said. "But we had already turned in our inactives, and then we were informed. ... We had to wait on that (retest). In the meantime, the league told us we would not be allowed to bring a different player up if he tested positive, but if he tested positive, he wasn’t going to be allowed to play.

"My understanding, they did all the contact tracing; all the procedures were followed as far as any other player was concerned. But then they came back out when we were on the field in pre-game warmups and said that he had tested positive. So, he would not be allowed to play, and that’s where we were at. So, we played a man short.”

Sills noted that Carolina was forced to close its facility for two days after positive tests that “linked back to some gathering of players outside the facility.” The Panthers were on a bye last week.

“Almost all the cases we have seen have occurred within the community,” Sills said. "That is what we predicted, that would be the predominant source. The degree of exposure is related to the prevalence of the virus in that community at that time.

“You can’t make a complete isolation any time you put a group of people together. You have to consider exposures on all sides.”

The league does not expect to have access to COVID-19 vaccines this season, and Sills reiterated that the NFL would not “jump the line” in any way.

“The roll out of the vaccine is driven by public health concerns,” he explained. “We are prepared to support that effort, how can we amplify the message? We are proceeding as if we will operate the rest of the season through the Super Bowl without a vaccine. For the present time, we are not counting on that being impactful for the current season.”