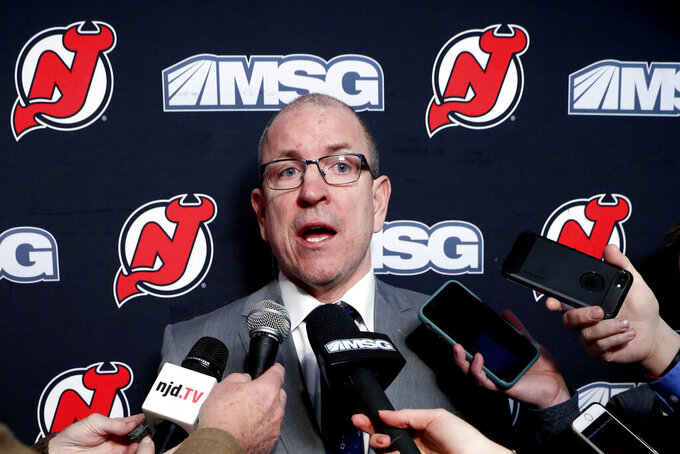 FILE - In this Feb. 16, 2020, file photo, New Jersey Devils interim general manager Tom Fitzgerald answers reporters' questions after the team announced that captain Andy Greene was traded to the New York Islanders before an NHL hockey game in Newark, N.J. The suspension of play in the NHL because of the coronavirus pandemic has put Fitzgerald of the Devils is limbo. The 51-year-old is waiting to see if the league will finish its season and also see if he still has a job. (AP Photo/Kathy Willens, File)

The suspension of play in the NHL because of the coronavirus pandemic has put Tom Fitzgerald of the New Jersey Devils in a strange situation.

The 51-year-old is waiting to see if the league will finish its season and whether he gets to keep his job.

Fitzgerald is the only interim general manager in the league. He took over Jan. 12, when Ray Shero was fired, and has guided the struggling Devils to a 12-8-5 record.

There are five others in the NHL also in limbo during this time of isolation and staying in place. They are the league's interim coaches: Geoff Ward of the Calgary Flames, Alain Nasreddine of the Devils, Rick Bowness of the Dallas Stars, Bob Boughner of the San Jose Sharks, and Dean Evason of the Minnesota Wild.

“My job is to lead the hockey ops department until told otherwise,” Fitzgerald said Thursday in a video conference call. “And that’s all I’m trying to do right now is continue to do the job, not think of the what ifs, because I just think I can muddy the waters and distract an individual from thinking again, those whatevers.”

Fitzgerald said Nadreddine, who has led the Devils to a 19-16-8 record since replacing John Hynes on Dec. 3, is doing the same thing. He is focusing on his job and taking care of his responsibilities.

Fitzgerald joked that while he has the interim tag, everybody in the NHL is in the same category these days.

Fitzgerald has weekly discussions with team owners Josh Harris and David Blitzer. His job is to keep everyone on their toes. He has the scouts working on their talent evaluations and the players and coaches to be ready to return.

“I’ve got an opportunity to grow as as a manager,” Fitzgerald said. “I feel really good about where I’m at and the job that I’ve done so far with the help of a lot of people in the organization. It takes a village to build success. Whether my future’s here or not, the future is here until they tell me otherwise. And if that’s the case of whatever, I’ll cross that bridge.”

Of all the guys with the interim coaching tags, Ward might be in the best shape. He has led the Flames to a 24-15-3 mark since replacing Bill Peters on Nov. 26. They were in a playoff spot when the season was halted.

Flames general manager Brad Treliving said he has not made a decision on Ward's future.

“When you’re uncertain about things, that’s where you get anxiety," he said. "You’re being a little naive if you think you have to have all the answers.”

Sharks general manager Doug Wilson will decide Boughner’s future after the season. He wants input from the players and his staff.

Boughner was hurt by injuries and suspensions in posting a 14-20-3 record after replacing Peter DeBoer on Dec. 11.

“The things we were looking for, I thought were addressed,” Wilson said. “Boughy and I have talked a lot about clarifying how we want to play, and ultimately getting your team to commit to playing the right way for longer periods of time irregardless of your talent level.”

Bowness has posted a 20-13-5 mark with the Stars since replacing Jim Montgomery on Dec. 10. Dallas was in third place and a playoff spot when play was halted.

If general manager Jim Nill is looking for a positive besides the record, the Stars have given up 177 goals, second-fewest in the league to Boston (174).

The Wild have a difficult choice with Evason. He replaced Bruce Boudreau on Feb. 14 and has posted a 12-8 record in his first shot as an NHL coach.