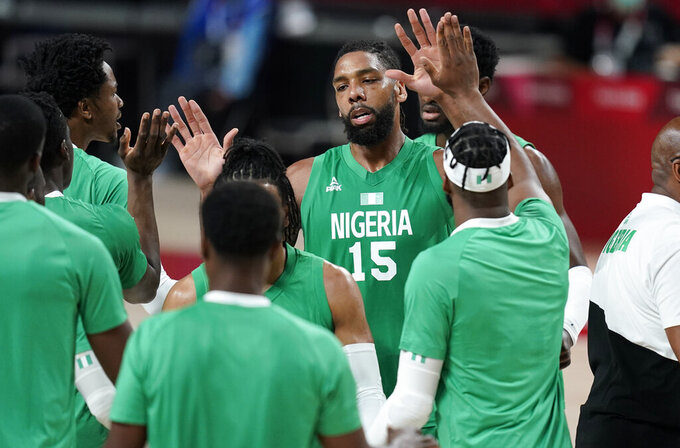 FILE - Nigeria's Jahlil Okafor (15), center, celebrates with teammates after making a basket during men's basketball preliminary round game against Italy at the 2020 Summer Olympics, July 31, 2021, in Saitama, Japan. The Nigerian government has made a sudden U-turn and cleared its national basketball teams to return to competition immediately. The sports ministry on Thursday, June 23, 2022 says the decision to lift a ban on the teams playing in international competitions came after an appeal to the government by the Nigerian Basketball Federation. (AP Photo/Charlie Neibergall, file)

CAPE TOWN, South Africa (AP) — The Nigerian government made a sudden U-turn on Thursday and cleared its national basketball teams to return to competition immediately.

The decision to lift a ban on the teams playing in international competitions came after an appeal to the government by the Nigerian Basketball Federation and “intervention” by former Nigerian international players, the sports ministry said. Nigerian President Muhammadu Buhari approved the return to play, the ministry said in a statement.

The Nigerian government withdrew its teams from international competitions for a two-year period last month citing a leadership struggle and other administrative problems within the national basketball federation.

That move led to the women's team losing its place at the World Cup in Australia in September. It's unclear if Nigeria's women will be able to get their place at the World Cup back after international governing body FIBA replaced them with Mali. The Nigerian sports ministry said it had recently been speaking with FIBA.

The two-year ban also threatened the men's team's qualification for the 2023 World Cup. The World Cup qualifiers start again on July 1 and the Nigeria men's team said on Twitter following the lifting of the ban that it was “scrambling” to see if it can now make the qualifying competition in Kigali, Rwanda.

The men's World Cup also serves as the qualifying tournament for the 2024 Paris Olympics and Nigeria is in danger of missing both if it misses those qualifiers in Rwanda.

The Nigeria men's team is coached by Sacramento Kings coach Mike Brown and put itself on the map by upsetting the United States in a warmup game ahead of last year's Tokyo Olympics.

The government's decision last month to pull the teams from international competitions was fiercely criticized by players on the Nigeria teams but also drew reaction from figures in the NBA. Toronto Raptors president Masai Ujiri and Boston Celtics coach Ime Udoka, who are both of Nigerian descent, expressed their frustration with the leadership of Nigerian basketball.

The sharpest criticism of the authorities came from the men's team, which posted on Twitter early this month: “We hope someday Nigeria will be led by a government without corruption & greed. The future of Nigeria basketball is extremely bright and we are being held back by our leaders.”

There's been a long history of problems at the Nigerian Basketball Federation but the latest issues center on a leadership tussle after two separate presidents were elected to lead the NBBF in parallel elections. The sports ministry said the lifting of the ban depended on the NBBF honoring a commitment it gave to work with the ministry to resolve all its “issues.”