No. 1 Alabama heavy favorite vs No. 11 Florida for SEC title 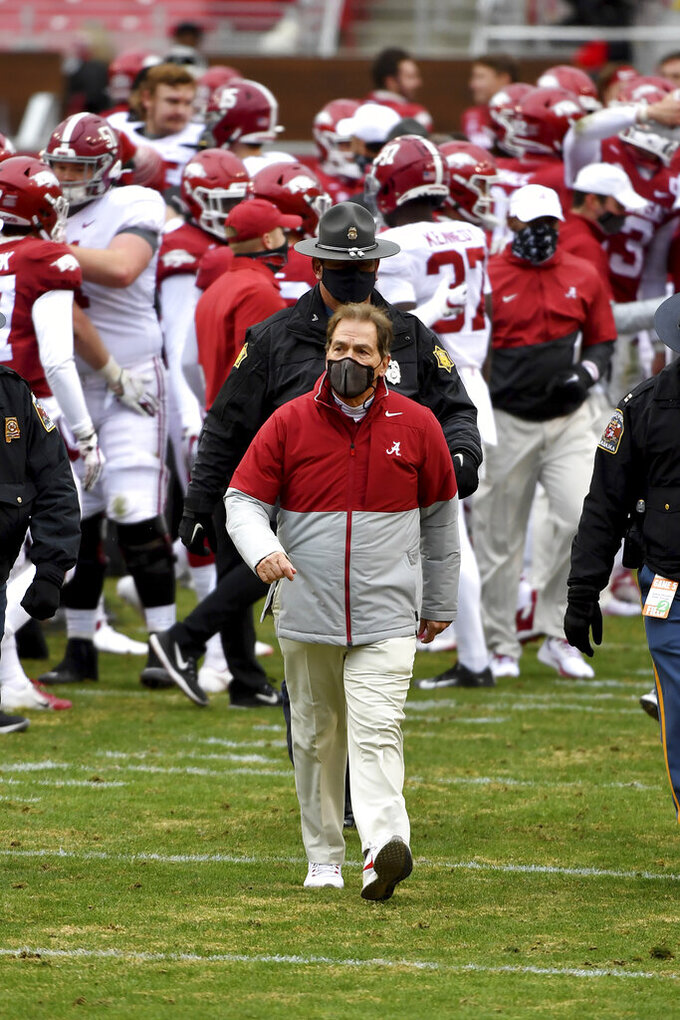 ATLANTA (AP) — Alabama's slump lasted all of one season.

After failing to reach either the Southeastern Conference championship game or the College Football Playoff a year ago — what qualifies as a subpar season in Tuscaloosa — the Crimson Tide is back on track to claim another national title.

Nick Saban's top-ranked team (10-0, No. 1 CFP) has successfully navigated — dominated, actually — an SEC-only gauntlet of a regular season brought on by the coronavirus pandemic.

The Tide had won every game by at least 15 points. Its average margin of victory is a whopping 32.7 points.

Now, it's on to the league title game in Atlanta as a heavy favorite Saturday night against No. 11 Florida (8-2, No. 7 CFP), which likely ruined its hopes of reaching the four-team playoff with a shocking home loss last weekend to LSU.

“It’s been a very disruptive year from the whole COVID standpoint,” said Saban who was stricken with the virus himself and couldn't coach in an Iron Bowl victory over rival Auburn. “But our players have done a good job of handling that, shown a lot of maturity.”

Saban has built what is very likely the most dominant dynasty in college football history over his 14 years at Alabama.

At age 69, he shows no signs of slowing down. Just this week, Alabama landed what appears to be the top-ranked recruiting class in the country for 2021.

“It’s all part of the culture that we try to create,” Saban said. “When people come here, that’s the expectation that they have. That’s what they buy into.”

In his third year at Florida, coach Dan Mullen led the Gators to the SEC title game for the first time since 2016 behind the dynamic passing of Kyle Trask, who has thrown for 40 touchdowns in the shortened season — 10 more than anyone else in the country.

But Florida's hopes of reaching the national playoff likely ended with a shoe-throwing, 37-34 loss to LSU.

No two-loss team has reached the playoff since it began in 2014.

Mullen tried to sound a confident tone for the Gators, who were a 17-point underdog to the Crimson Tide.

“We’ll think about that on Saturday night after we win,” he said, perhaps providing some bulletin-board fodder for his opponent. “That’s all we can control. What happens after that, we’ll see what happens.”

Some things to watch for in the SEC championship game at Mercedes-Benz Stadium:

College football's top individual prize could be decided in Atlanta

Trask and Mac Jones of Alabama are two of the leading contenders for the Heisman Trophy, which may wind up going to the one who has the best game Saturday night.

And don't forget Crimson Tide receiver DeVonta Smith, who has been Jones' favorite receiver, and Florida tight end Kyle Pitts, who has hauled in 11 TD passes despite missing 3 1/2 games with injuries.

Trask is second nationally in passing yards per game (360.3), one spot ahead of Jones at 345.9. Jones’s 27 TD passes ranks third nationally. Jones is the nation’s No. 2-rated passer and Trask is fourth.

It's been a remarkable season for both, especially since neither was a top-ranked prospect coming out of a high school.

“We’ve had to overcome some obstacles throughout our careers,” Trask said. “Now we’re having the opportunity to play against each other, which is really cool.”

The Gators lead the SEC in sacks but their blitzing style can leave them vulnerable to big plays.

No one is more explosive than Alabama's Smith, who has 83 catches for 1,327 yards and 15 touchdowns, averaging 16.0 yards per reception.

But Florida knows it can't just let Jones sit comfortably in the pocket.

“Up front, it’s important to kind of try to change up the looks,” Mullen said. “You have got to get after the quarterback a little bit, get him out of rhythm early in the game.”

Alabama's defense got off to a sluggish start this season, surrendering an average of 28.8 points over its first four games.

But the Tide has looked more like a Saban-coached team since then, giving up only 8.8 per game.

“It took a while for the group to develop confidence that they could play well, they could play together as a unit, get the concept of if everybody does their job, we have a chance to be successful,” Saban said.

But he warned that Florida presents the toughest test of the season.

“We’re going to get challenged in this game in a different way than we’ve been challenged for a long time because of the quarterback, the scheme that they run, the mismatch players that they have,” Saban said.

If the game is close, both teams have reason to be confident in their kicking games.

Florida's Evan McPherson is a three-time Lou Groza Award semifinalist who has made 48 of 56 field goal attempts (85.7%) in his college career. He will have to bounce back from missing a 51-yarder on the last play of the game against LSU, costing the Gators a chance to pull out the victory in overtime.

Alabama's Will Reichard has yet to miss this season. He has made all 11 of his field-goal attempts, along with a 66-of-66 mark on extra points.

Mullen is 0-9 against Saban in his head coaching career, though all of the losses came in his previous job at Mississippi State.

“It would be huge,” Mullen said, when asked what it would mean to finally beat Saban.

But the Florida coach quickly added that this game is bigger than personal achievements.

“It would be great in terms of this year’s team for us to go win an SEC championship,” Mullen said. “It would be really special for all the work that these guys have put in over the course of this year.”