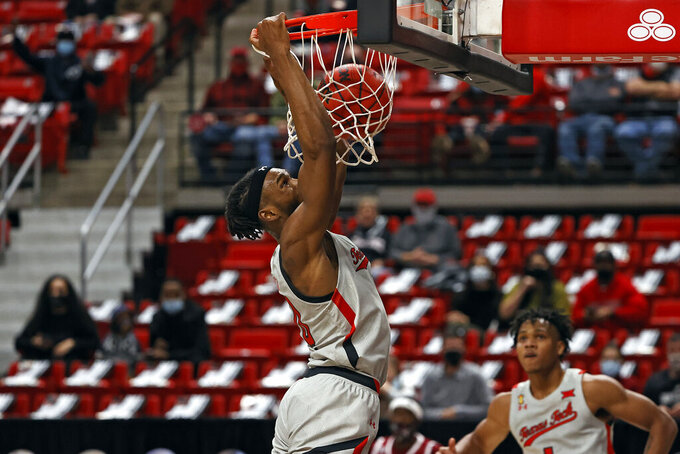 LUBBOCK, Texas (AP) — Texas Tech coach Chris Beard said it wasn't a scramble to find Troy as a replacement opponent in a matter of days when both schools had games called off because of the COVID-19 pandemic.

Beard saw plenty of value in getting the game in rather than simply moving on to the next one on the schedule, which comes quickly for both teams.

Mac McClung scored 17 of his 20 points in the first half for the 17th-ranked Red Raiders, who led big early and beat Troy 80-46 on Friday night.

The Red Raiders (3-1) were supposed to play St. John's this week before the New York City school balked at making the trip to Texas as coronavirus infections surge. The Trojans (1-2) couldn't go to Wake Forest because of COVID-19 issues for the Demon Deacons.

While Cross spent 20 years at Texas-Arlington — a little more than half of that as head coach — Beard was on Bob Knight's staff at Texas Tech more than a decade ago before coming back and leading the Red Raiders to their first national championship game appearance in the most recent NCAA Tournament, in 2019.

“We’re not going to face a tougher defensive team the rest of the year so that’s a great opportunity or our guys to see how the best of the best play defense,” Cross said. “We’re trying to play a similar style of defense. Obviously we’re not there, but our guys got to see how tough and physical Tech is.”

Kyler Edwards had 14 points and four assists and Terrence Shannon Jr. scored 13 points as Texas Tech won the second meeting between the schools nine years after a five-point win by the Red Raiders in Lubbock.

Kam Woods had 13 points as the only double-figure scorer for Troy, which was playing a ranked opponent for the first time in two years and is still looking for its first victory over a Top 25 team.

McClung, who tied for the game with five assists, hit a 3-pointer to start a 17-0 run for a 29-9 lead, the surge fueled by three straight turnovers from the Trojans, who had 22 turnovers and were outscored 31-4 on points off turnovers.

The Georgetown transfer hit another 3 during the run and finished 4 of 8 from long range coming off an 0-for-6 showing in a 64-53 loss to Houston in a Top 25 matchup.

Texas Tech was at 58% from deep after shooting 22% against Houston. Troy made just two of 20 from beyond the arc.

“We got some offense from our defense tonight,” Beard said. “I think in the Houston game, we only had two baskets off our defense. And that’s just not the way we play. There’s not an offense in our league or in college basketball that can just handle 100% of the load for a team’s offense.”

Troy: There's a small consolation in the middle of a stretch of five straight road games to start the season for the Trojans, who at least can say they're going home to Alabama. Troy was supposed to open at home against Middle Georgia State, but that game was canceled by COVID-19 issues. The two remaining away games are at UAB and North Alabama. The home opener is Dec. 16 against Samford.

“We have young, young guys,” Cross said. “Just to have the experience of playing in a great environment, it's a great opportunity for our guys to go on a road trip, grow closer as a basketball team, experience adversity.”

Texas Tech: The Red Raiders took control early after a slow start cost them against the Cougars, who surged past Texas Tech in the poll, jumping seven spots to No. 10. Texas Tech trailed Troy for just 27 seconds, going ahead for good on a 3-pointer from McClung less than four minutes in. The Red Raiders shot 64% in the first half, and a 7-0 spurt gave them their biggest lead of the first half at 47-20 just before the break. The biggest lead was 37 (75-38) late in the second half.

“I think we showed maturity,” Edwards said. “We knew that we played bad against Houston, and we knew we had to make as statement tonight. I think we did a good job of doing exactly that.”

Cross was fired at Texas-Arlington after the 2017-18 season and replaced by one of Beard’s Texas Tech assistants, Chris Ogden. Cross had just finished a third straight 20-win season and fifth overall in 12 seasons leading the UTA program.

It's a quick turnaround to Sunday afternoon games for both teams. Troy visits UAB, and Texas Tech plays Grambling at home.