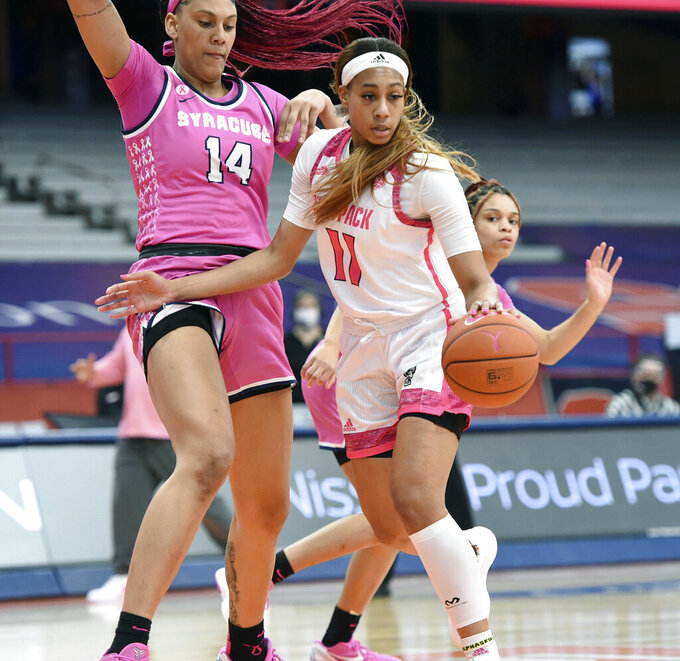 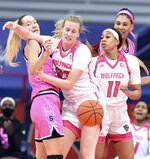 The Wolfpack (17-2, 12-2 Atlantic Coast Conference) have won their last four games against the Orange and handed Syracuse (12-7, 9-7) its first loss of the season in the Carrier Dome.

The game had special meeting for both teams because it was part of the Play4Kay campaign. The Orange donned pink uniforms to honor former N.C. State coach Kay Yow, who battled breast cancer for 22 years until her death in 2009. It also marked the first time Orange star guard Tiana Mangakahia wore the pink uniform since she was diagnosed with breast cancer in June 2019 and missed all of last season after a bilateral mastectomy and several rounds of chemotherapy.

It was the final home game of Mangakahia's stellar career. The 25-year-old from Australia entered the game averaging 7.6 assists to lead the nation and finished with five to boost her career total to 726 assists in three seasons. Kiara Lewis led the Orange with 29 points and Mangakahia had 10.

After a tight first half that saw neither team lead by more than five points, the Wolfpack put together a 13-0 run that broke a 36-all tie and put them seemingly in command. Cunane started it with a pair of free throws, Raina Perez followed with a 3-point play off a fast break and Jakia Brown-Turner scored on a fast-break layup for a 43-36 lead late in the third quarter.

The Orange rallied in the fourth, reeling off a 16-2 run to take the lead back. Consecutive 3-point plays by freshman center Kamilla Cardoso and Priscilla Williams keyed the spurt as the Wolfpack went cold against the Orange press. Maeva Djaldi-Tabdi's layup with 6:11 left pulled the Orange to within 53-49 and Lewis followed with a layup and a 3 from the left wing to put the Orange up by a point.

The Wolfpack led 18-15 after a tight first quarter and the second was more of the same in a seesaw second. N.C. State took a 28-25 lead on a baseline runner by Kai Crutchfield with 3:16 left before halftime, but Mangakahia drove the lane for a layup and Lewis followed with a nifty drive through the lane and gave the Orange a 31-30 lead with a runner just before the buzzer. ... The game pitted North Carolina State’s 6-foot-5 Cunane against the Orange’s 6-7 freshman center Cardoso (14.9). Syracuse's leading scorer was held scoreless before halftime, missing all three shots, and played just 7 minutes after picking up two early fouls. Cardoso finished with a season-low three points on 1-of-5 shooting but snared 10 rebounds.

N.C. State should retain its ranking, having held off a team that was ranked early in the season.

North Carolina State: The Wolfpack dismantled Louisville 74-60 on Feb. 1, when Cunane scored 16 points in her first game in nearly a month because of COVID-19 protocols. The Wolfpack have lots of offensive options, which gives them the potential for big outbursts at any moment. If the return of Cunane made such a difference against the Cardinals, the sky's the limit for this team.

Syracuse: The Orange thought they were underrated at No. 23 in the preseason AP Top 25, but after two straight losses last month dropped them out of the rankings altogether, they have not been able to claw their way back. Mangakahia is hopeful of making a run in the postseason to cap her career, and with Cardoso in the middle and senior guard Kiara Lewis in the backcourt, they form a dynamic trio that can cause lots of problems.