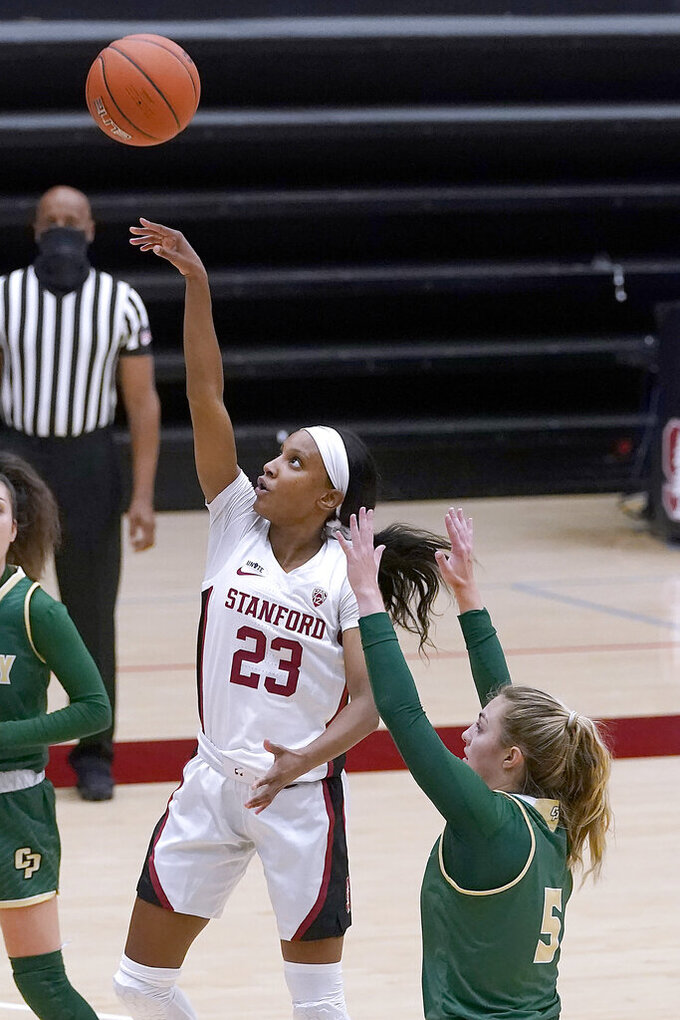 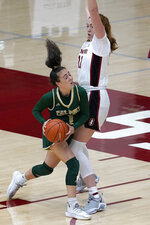 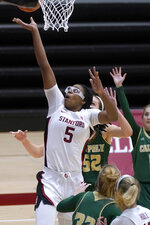 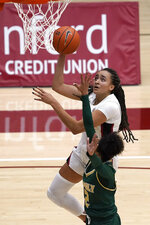 STANFORD, Calif. (AP) — Haley Jones felt all the nerves as if it were her first game as a freshman again last fall. It only took a few minutes and she found a nice groove.

Jones scored on a layin 14 seconds into the game and wound up with 16 points and 10 rebounds playing for the first time in more than 10 months since a knee injury ended her freshman season early, leading No. 2 Stanford past Cal Poly 108-40 in the teams' season opener Wednesday.

“We’ve really missed Haley. When she went out last year it was devastating for our team,” Stanford coach Tara VanDerveer said.

The Hall of Fame coach began her 35th season on The Farm by moving to 1,095 career wins — four from passing the late Pat Summitt's 1,098 victories to become the all-time winningest NCAA Division-I women's basketball coach.

Stanford, one of four Pac-12 teams in the preseason Top-10 rankings and five among the top 18, used a 26-2 run to end the first half and build a 51-18 lead then kept pushing as the entire roster gained valuable minutes.

Stanford senior and returning leading scorer Kiana Williams scored 13 points after she averaged 15 points per game as a junior before the Cardinal missed out on the NCAA Tournament — they had been set to host the first two rounds — because of the coronavirus pandemic. Cameron Brink, a 6-foot-4 freshman, contributed 17 points and nine rebounds in her collegiate debut while Lexie Hull had 21 points with four 3-pointers.

VanDerveer expressed her gratitude to the Mustangs for staying healthy so the game could be played.

“It was really fun to see everybody out there. I’m just so thankful we can play,” VanDerveer said.

Later Wednesday, Stanford announced Sunday's game against Pacific had been canceled because of a positive coronavirus test result in the Pacific program that caused the suspension of team activity.

VanDerveer used a red plastic bullhorn to make herself better heard given the social distancing and manufactured crowd noise in empty Maples Pavilion — Williams had told her it was hard to understand and hear with the coach wearing a mask. The bullhorn is allowed but not VanDerveer's microphone she typically uses during practice.

Jones shot 6 for 10 in her first game since sustaining the right knee injury Jan. 19 at Oregon State in her 18th career game. She averaged 11.4 points and 4.2 rebounds to start the season before getting hurt, earning 13 starts.

“I definitely had more pregame jitters than I expected to have. I haven't suited up for a while, I was always sweats or leggings on the sideline," Jones said. “So really putting on the uniform gave me those jitters just like freshman year. Coming out and getting that first layup was a big confidence booster. It helped me kind of relax into the game.”

Cal Poly senior forward Sierra Campisano was the lone player to score in double figures for the Mustangs with 13 points. She is a big reason Cal Poly won its first two games in the Big West Conference tournament.

PAYE IN THE STANDS

Stanford associate head coach Kate Paye sat in the stands above the bench among cardboard cutouts due to a delay with the result from her game-day antigen test administered about four hours before the 11 a.m. tipoff.

“Kate said she was kind of one of those bad AAU parents. She was screaming,” VanDerveer said. “We were over there in the huddle and she was yelling down to me. That's my nightmare is I get stuck up in the stands so hopefully they won't lose my test."

NO DOUBLEHEADER AFTER ALL

The second game of a scheduled doubleheader featuring the Stanford men's team against Utah Valley University was canceled because of a positive COVID-19 test in the Utah Valley program. Stanford was exploring options for a replacement non-conference game.

Cal Poly: The Mustangs couldn't withstand a big second-quarter shooting funk in which they shot just 2 for 17 from the floor. ... A Cal Poly team returning four starters and 12 letterwinners hurt its cause by committing 26 turnovers, giving up 10 steals to the Cardinal.

Stanford: The 67-year-old VanDerveer's mark at Stanford is 943-202. ... The Cardinal finished with just 10 turnovers after averaging 13.7 turnovers per game last season, barely higher than its opponents 13.6. It is something VanDerveer regularly emphasizes. ... Fifth-year senior guard Anna Wilson, younger sister of Seattle Seahawks quarterback Russell Wilson, earned her sixth career start in the opener and dished out five of 26 assists. VanDerveer credited Anna Wilson for a strong preseason.

Stanford: The Cardinal are looking into options for replacement games with Sunday's cancellation.