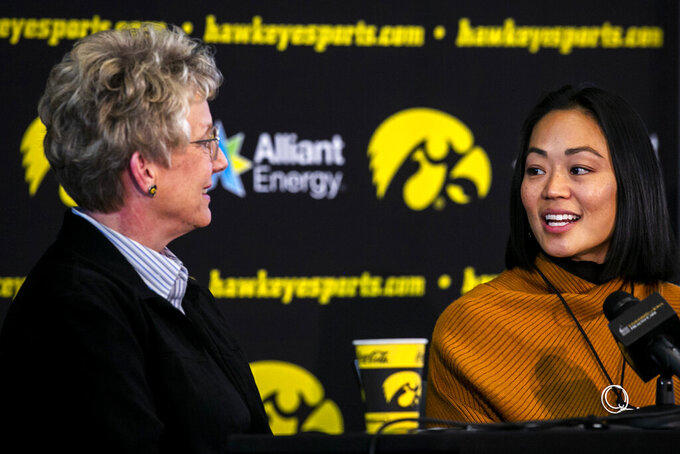 Two-time Olympian Clarissa Chun, right, thanks Barbara Burke, University of Iowa's deputy director of athletics, during at a press conference where Chun was introduced as the coach of the new Iowa women's wrestling program in Iowa City, Iowa, Friday, Nov. 19, 2021. (Joseph Cress/Iowa City Press-Citizen via AP)

IOWA CITY, Iowa (AP) — One of the best moments of Clarissa Chun’s wrestling career was qualifying for the 2012 U.S. Olympic team at Iowa’s Carver-Hawkeye Arena.

Now, as the coach of Iowa’s new women’s wrestling program, Chun has the chance to add more special memoris in a familiar spot.

“There’s no better place than here to get it going,” Chun said Friday at her introductory news conference, referring to Iowa’s 24 NCAA men’s national championships. “The crown jewel of wrestling is right here.”

The 40-year-old Chun, who grew up in Hawaii, is the first coach of a women’s wrestling program at a Power Five conference school. Iowa officials announced the new program in September.

The team will begin competition in the 2023-24 season, although deputy athletic director Barbara Burke said wrestlers who come to Iowa for next season will be able to train and could wrestle unattached in college events.

“This was a dream of mine when I was in high school,” Chun said. “But that wasn’t a possibility.”

Chun has been an assistant coach with the U.S. women’s team since 2017, working with head coach Terry Steiner, a former national champion at Iowa. Chun helped lead the United States to 17 world championship medals, as well as four Olympic medals.

“She clearly knows what it takes to develop championships,” Burke said. “She’s done so much for this sport, and she deserves a lot of credit for the growth of women’s wrestling.”

Athletic director Gary Barta lauded Chun's credentials, but said “what really became apparent as we started to go through the interview process was her passion, her plan, her excitement to lead this program.”

“I still want to develop world, national and Olympic champions, but here at the University of Iowa,” Chun said. “I’m excited for the opportunity to bring them here on campus.”

Chun’s first day as Iowa’s coach will be Feb. 7.

“I know that this won’t happen overnight,” Chun said. “To start a women’s wrestling program at a Power Five institution is only the beginning of so many great things to come.”

Chun remembered the day after she qualified for the 2012 Olympics in the trials in Iowa City.

“Some nice young guy came up and congratulated me, and ended up buying breakfast for me, because he was really excited that I made the team,” Chun said. “That doesn’t happen anywhere I’ve been.”

Chun said she knows there will be high expectations because of Iowa’s wrestling success.

“Just because they become a Hawkeye doesn’t mean they’re going to be national champions,” Chun said. “They have to go work for it, earn it, and make it happen.”

Chun knows of the challenges she faces to build a new program.

“I’m excited to be the first, though, to get it going,” she said.