No charges filed against Michigan official who flashed rifle 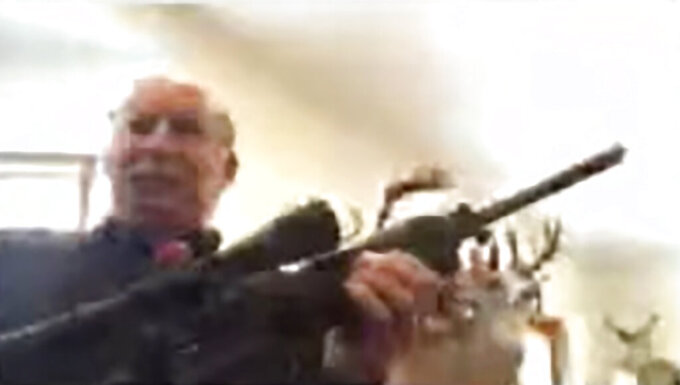 TRAVERSE CITY, Mich. (AP) — Michigan's attorney general said Friday she would not file charges against a county commissioner who displayed a rifle during a livestreamed meeting, an incident some described as illustrating racial and cultural tensions in the Lake Michigan resort area.

Ronald Clous, vice chairman of the Grand Traverse County Board, showed the weapon on camera Jan. 20 as a citizen on the phone was complaining about a decision to allow two members of the far-right Proud Boys to speak at an earlier meeting.

“I find Commissioner Clous' action to be reprehensible and irresponsible, but not illegal,” Nessel, a Democrat, said in a statement. “While he will not face accountability in a courtroom, Commissioner Clous' constituents have the power to make their opinions clear the next time he's up for re-election.”

Phone and email messages seeking comment were left with Clous, a Republican.

The county in Michigan's northwestern Lower Peninsula, about 250 miles (402.34 kilometers) northwest of Detroit, is known for its beaches, trails, orchards, food and arts scene. Its population is well over 90% white. Republicans hold most elective offices in Grand Traverse and neighboring counties.

During the pandemic, the county board met virtually from home and allowed residents to phone in with comments.

The caller during the Jan. 20 meeting urged the chairman to denounce the Proud Boys, some of whom had taken part in the U.S. Capitol riot weeks earlier. The board had welcomed members of the group to a meeting the previous year to urge approval of a resolution designating Grand Traverse County a “Second Amendment sanctuary.”

As the caller spoke, Clous stepped away from his webcam and returned with a rifle. He held it across his chest for about five seconds, then set it aside.

More than 1,500 people signed a petition demanding Clous' resignation. Some said the incident was threatening to racial minorities and had damaged the community's reputation, while others said it had been blown out of proportion.

In an interview after the meeting with the Traverse City Record-Eagle, Clous said the Proud Boys who had addressed the board were “decent guys.”

The caller later filed a report with state police. A review by the attorney general's staff found insufficient evidence of malicious intent, Nessel said, noting that Clous hadn't pointed the weapon directly at the camera.

“Any time a person feels the law has been violated, the police should be notified and a report should be filed to ensure a proper investigation,” Nessel said. “I appreciate the community member who came forward to file this report, and I respect the conclusion reached by my office.”