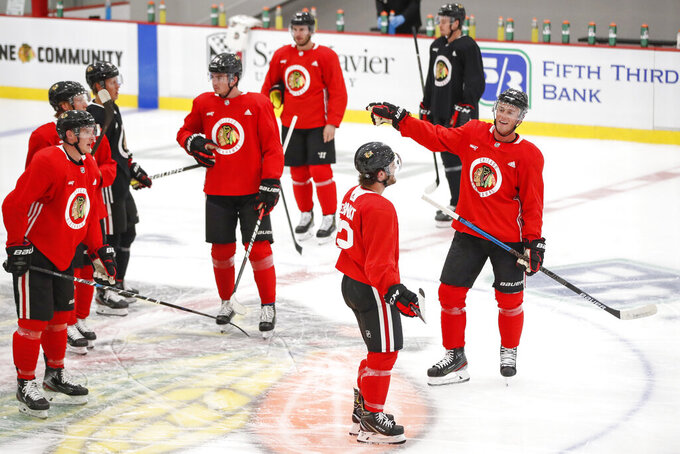 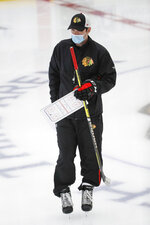 Corey Crawford was absent Monday when the Chicago Blackhawks practiced for the first time since the NHL season was suspended, casting doubt on the goaltender's availability for their qualifying series against Edmonton.

The 35-year-old Crawford was “unfit to play or to participate,” coach Jeremy Colliton said — sticking closely to the league's strict language for discussing missing players in the COVID-19 world. There was no further word on Crawford's situation.

The potential loss of Crawford is a big blow as the Blackhawks prepare for the Oilers and their high-scoring duo of Connor McDavid and Leon Draisaitl. Game 1 of their best-of-five series is Aug. 1 at the NHL hub in Edmonton.

Malcolm Subban, Collin Delia and Kevin Lankinen each will get a long look in goal while Crawford is away from the team. The Blackhawks also have Matt Tomkins on their training camp roster.

“At the end, we’re going to have to make a decision, but we want those guys to make it as difficult as possible,” Colliton said on a video conference call.

Subban, Delia, Lankinen and Tomkins have played a total of 84 NHL games with no postseason appearances. The Blackhawks had Robin Lehner on the roster before he was traded to Vegas in February in a deal that brought back the 26-year-old Subban — by far the most experienced option among the remaining goaltenders in camp.

“The way we are handling this is, you know, we’re looking at the guys that are here and ready to play,” general manager Stan Bowman said. “And when Corey is in that group, then we can talk about Corey. But the focus today was to get ourselves back going. And we’ve got four goaltenders here.”

Crawford missed parts of the previous two seasons because of concussions. But he had been playing well when the league was shut down because of the pandemic, recording a .930 save percentage in his last 17 games.

While Crawford was away from the team, veteran defensemen Brent Seabrook and Calvin de Haan skated again after being sidelined by what would have been season-ending injuries in a normal year.

If de Haan is ready to go, he likely would slide into the lineup somewhere. The situation with the 35-year-old Seabrook, a key member of three Stanley Cup-winning teams in Chicago, is more murky, given the rest of the defensive pairings and the extent of his operations.

But just seeing Seabrook at practice meant something to some of his longtime teammates.

“I know the surgeries that he had are not easy surgeries to overcome,” fellow defenseman Duncan Keith said, “and I think that’s a testament to his drive and dedication and his commitment. ... It’s great to see him back out there. It’s always a lot more fun when he’s on the ice with the guys. So, yeah, it’s impressive. I mean, it’s a quick turnaround, really.”