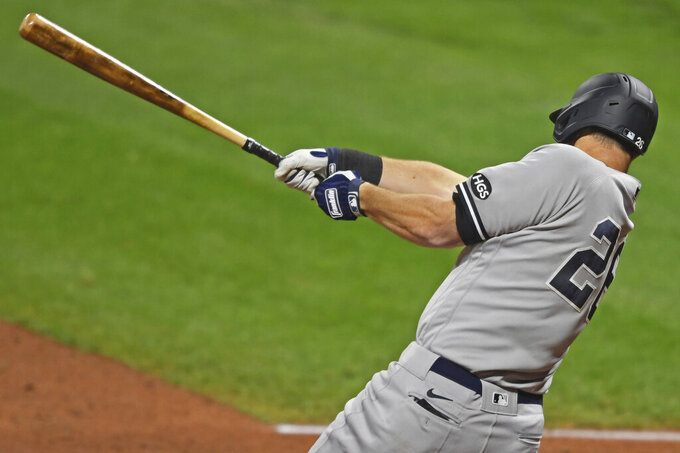 CLEVELAND (AP) — On a night for debates, Aaron Judge, Gerrit Cole and the New York Yankees made quite an opening statement.

Shane Bieber had no rebuttal.

Judge smashed a tone-setting, two-run homer on Bieber's fourth pitch, Cole struck out 13 in his New York playoff debut and the Yankees opened their AL wild-card series with a resounding 12-3 win over the Cleveland Indians on Tuesday.

Just a few miles from where President Donald Trump and campaign opponent Joe Biden made their cases to the nation in their presidential debate, the Yankees teed off against Bieber, who was baseball's best pitcher during the condensed regular season but ineffective in his playoff debut.

Judge and the rest of New York’s hitters hadn't faced Bieber in 2020, but they were well prepared and took some meaty cuts against the 25-year-old ace, who gave up season highs in runs (seven) and hits (nine) over 4 2/3 innings — his shortest stint since June 9 last season against the Yankees.

“The first inning didn’t go as planned,” Bieber said. "I wish I would have been with my off-speed stuff in the zone, and challenged those guys a little more. I forced myself into some bad situations and some bad counts on top of not having my best stuff and making mistakes.

“No excuses. It was not good.”

When Bieber's final pitch clanged loudly off the empty left-field bleachers on a two-run homer by Gleyber Torres in the fifth, the Yankees were up 7-2 and had delivered a boisterous postseason message to the rest of baseball: Don't forget us.

“We scored quite a few runs," said Brett Gardner, who hit a two-run homer in the seventh and drove in three. "I don’t think you ever expect that against a pitcher the caliber of Shane Bieber. Hopefully that’s a sign of more good things to come.”

After giving up Torres' homer, Bieber handed the ball to acting Indians manager Sandy Alomar Jr. and walked slowly toward Cleveland's dugout, seemingly carrying all of the city's hopes for a long run with him. The Indians have lost seven straight playoff games.

Staked to an early lead on Judge's homer, Cole showed why the Yankees shelled out $324 million for him in the offseason. The right-hander gave up two runs — including Josh Naylor's homer — and six hits without a walk in seven innings.

Naylor went 4 for 4 and became the first player with three extra-base hits in his postseason debut.

Cole's strikeouts were the second-most by a New York pitcher in postseason history. Roger Clemens fanned 15 in Game 4 of the 2000 ALCS. Cole also became the first pitcher to strike out at least 12 in three postseason games.

“We needed to set the tone for the series,” Cole said. “I’m obviously very thankful and humbled to be able to take the ball and be in this position. To be able to deliver feels really good.”

Giancarlo Stanton added a solo shot in the ninth for the Yankees, who didn't even have to warm up their top relievers — keeping Aroldis Chapman, Zack Britton and Adam Ottavino fresh for Game 2.

Judge's first homer since coming off the injured list on Sept. 16 — and the first allowed by Bieber at home this season — gave the Yankees a stunning 2-0 lead.

“We had a big, long hitter’s meeting about all sticking to the same plan and just trying to work counts, get pitches to drive and I think, as a whole, we did that," Judge said. "That’s when this team is dangerous, when we go out there and we can just grind out at-bats. Any mistakes that are thrown up there, we hammer them.”

DJ LeMahieu, the AL batting champion, led off with a single before Judge, who missed 29 games with a strained calf, blasted Bieber's first pitch, a middle-of-the-plate fastball, beyond the wall in right-center.

It was just the shot in the arm the Yankees were looking for after going 11-18 on the road this season and dropping six of eight down the stretch.

Unlike the previous four postseason matchups between the Indians and Yankees since 1997, this one, played amid a pandemic that threatened to wipe out the entire season, was different in so many ways.

There was barely any buzz downtown, parts of which were cordoned off because of the debate taking place on Case Western Reserve's nearby campus. Progressive Field was mostly empty and a cold front dropped the game-time temperature to 61 degrees so it felt like fall.

There were a few midges, those pesky flying insects that swarmed New York reliever Joba Chamberlain in the 2007 playoffs.

This time, though, the Yankees were the ones causing all the mayhem.

MLB eased its COVID-19 restrictions and allowed family members of players on both teams attend the game.

Boone said nearly half of New York's players had loved ones on the trip, and believes their presence can have a positive effect.

“Hopefully it is something that provides a little bit of an escape after the game and a little comfort,” he said.

The Indians are going through the postseason without their leader.

Manager Terry Francona, who missed 46 games in the regular season due to poor health, watched the game from a suite. Indians president Chris Antonetti said Francona continues to recover, but the 61-year-old is "still far short of 100%.”

Carrasco's inspirational comeback after being diagnosed with leukemia last year reaches the postseason. He'll face Tanaka, who pitched seven shutout innings in Game 3 of the 2017 ALDS against the Indians.