No flights, Argentine sails the Atlantic to be with parents 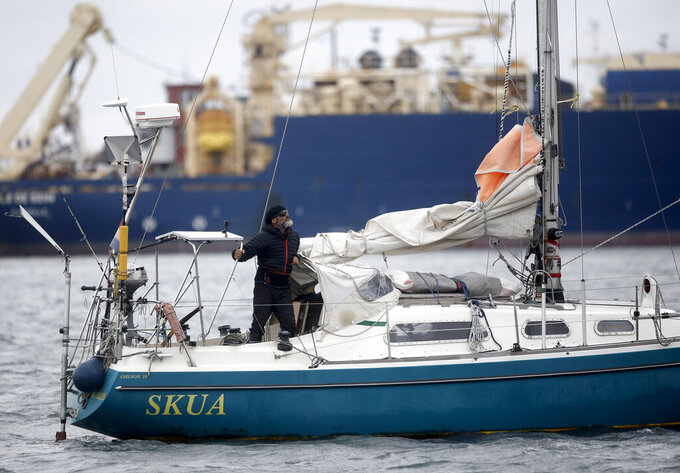 Juan Manuel Ballestero stands on his boat in Mar del Plata, Argentina, Thursday, June 18, 2020. Ballestero crossed the Atlantic on a small sailboat, setting off from the port of Porto Santo in Portugal on March 24 and finally reaching Mar del Plata on Wednesday to be reunited with his parents after flights to Argentina were cut due to the COVID-19 lockdown. (AP Photo/Vicente Robles) 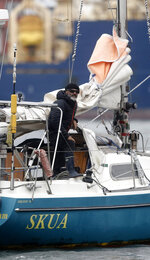 BUENOS AIRES, Argentina (AP) — Unable to fly home to be with his parents during the pandemic, Juan Manuel Ballestero decided to make the cross-Atlantic trip to Argentina from Portugal by sailboat, launching a three-month odyssey that included battling storms and dangerous waves.

Now in his hometown of Mar del Plata, where he arrived Wednesday, the 47-year-old Argentine said he planned the trip in just 24 hours after learning that flights to Argentina had been canceled amid lockdown measures to curb the spread of the coronavirus.

“I wanted to be with them,” Ballestero told The Associated Press on Thursday while waiting in quarantine before he can see his 90-year-old father, Carlos Ballestero, and 82-year-old mother, Nilda Gómez.

Ballestero, who lives in Spain, was in the Portuguese archipelago of Madeira when the lockdowns in Spain and Argentina took effect. He grabbed the 200 euros he had saved, loaded his sailboat "Skua" with food and set sail from Porto Santo, which had not yet been heavily affected by the pandemic.

Ballestero said fearsome storms threatened along the journey and he almost lost his life off the coast of Brazil when he encountered heavy winds and waves that tossed the small boat around. Nor was it easy to navigate the Río de la Plata river that leads to Mar del Plata, he said.

“Now I am calm, anchored here in the middle of this port,” the experienced sailor said. “There is no storm to bother me or boat to run me over.”

Though in Argentina, he must remain on his 8.8-meter (29-foot) sailboat for a 15-day quarantine unable to touch his parents, though they are in constant communication.

Ballestero said he made the journey because he was sure the pandemic and lockdown measures were going to be in place for a long time and he wanted to be with his family.

Ideally, he would have liked to be back in time to celebrate his father’s 90th birthday May 15, he said.

“I came to my home. It is human,” said Ballestero, who has fished in Alaska and the South Atlantic, and served as skipper of oceanographic sailboats looking for whales or carrying out environmental surveys.

He said he was especially afraid when his fiberglass boat was knocked over by waves some 150 miles from Victoria, Brazil. He said he "could have lost the mast” when the wave “brushed” him from above.

“The boat went over. I couldn't trim the sail in time," he said, adding that a cable broke. He said he got helping fixing his boat in Brazil.

Ballesteros said the important thing now is his coming reunion with his parents.

He said he has had enough adventures on the high seas for the time being and plans to stay in the house he has near his parents' home.

“I'll plant a garden and buy three chickens. I'll make it through the winter with the old people,” he said. “I want to be with the family.”