No spectators means no roars, the magic of the Masters 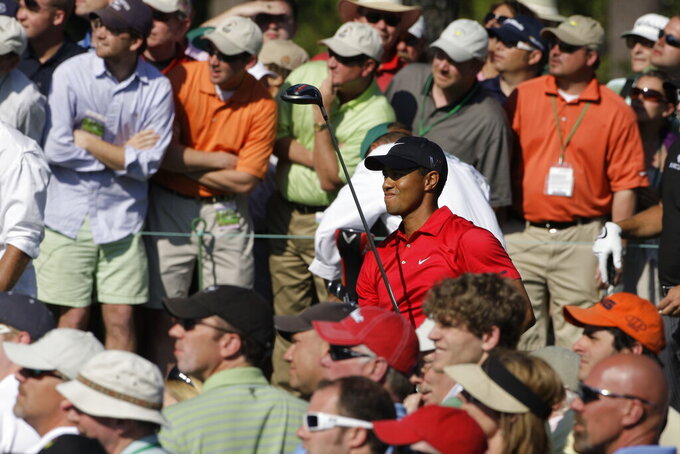 FILE - Tiger Woods is shown among spectators during the final round of the Masters golf tournament at the Augusta National Golf Club in Augusta, Ga., Sunday, April 12, 2009. Woods attracts the biggest galleries. For this Masters, there will be no spectators and no roars. (AP Photo/Morry Gash, File)

AUGUSTA, Ga. (AP) — The roars were endless Sunday at the Masters, coming from everywhere for just about everyone.

From below the rise of the fairway on the par-5 eighth hole, it sounded like a sonic boom. That was an eagle cheer coming from the green, no doubt. But for whom?

“Tiger Woods just came through,” a marshal said, and thus ended the mystery.

But it didn't end there.

Woods, who started that final round seven shots out of the lead, now was tied for the lead. Moments later, as Woods headed to the ninth tee, another cheer rang out from the 18th green. And then, another one down by Amen Corner. And then a third cheer in the direction of the 15th green.

More birdies? Eagles? No, it was the crowd scattered across the golf course responding to seeing scoreboards change as Woods moved into a tie for the lead. He couldn't keep it going. That was the year eight players had at least a share of the lead at some point on the back nine until Charl Schwartzel finished with four straight birdies.

This Masters in November will be missing the patrons because of the COVID-19 pandemic and missing the very essence of what makes Augusta National so magical.

“It echoes there. It travels,” Woods said. “It's unlike any place in the world.”

Woods has heard his share. He probably can still hear the lustrous chants of “Tiger! Tiger!” after he celebrated a fifth and most unlikely Masters victory last year. Or the change in pitch from anticipation to letdown to delirium when his chip on the 16th hole in 2005 trickled down the hill, stopped for a full second on the brim of the cup until gravity took over and the ball dropped for a birdie.

Ask what one moment stood out and it wasn't even for him.

He was paired in the final round with Davis Love III in 1998. Right behind them was 58-year-old Jack Nicklaus, making an early charge, chipping in for birdie on No. 3.

“The roars were so much louder. Those were Nicklaus roars,” Woods said. “And that's what I had grown up watching and got a chance to experience in person.”

Nicklaus had company in producing a cheer that Phil Mickelson still remembers. It was the second round of 1991. Mickelson, the 20-year-old U.S. Amateur champion, opened with a 69 and was on the 18th green.

“Tom Watson and Jack Nicklaus were playing together and on the 16th green, one of them made the putt from down below to the front right up-on-top pin. And the place erupted to the point where the ground actually shook and you could feel the vibrations in my feet,” Mickelson said.

“And moments later, the other player — I don't know who putted first between Tom and Jack — made the same putt and the place erupted again," he said. “That was my first Masters.”

A charge even more stunning than Woods in 2011 — which also fell short — was Jordan Spieth in 2018. He started the final round nine shots behind, and his birdie on the 16th put him at 9-under for the day and tied with Patrick Reed. Along for the ride that day was Justin Thomas, friends with Spieth since they were teenagers.

“He made about a 35-footer and that was the loudest roar I’ve ever heard in my life. It felt like the ground was moving. It was insane,” Thomas said. “I’m getting goosebumps just thinking about it, talking about it. It was unreal.”

Louis Oosthuizen could hear better than he could see when in 2012 he became the only player to make an albatross on the par-5 second hole, holing a 4-iron from 253 yards. He never saw the ball go in the hole, but he saw the people.

And he could hear them.

“I remember seeing it go up and disappearing behind the bunker,” he said. “Then I remember looking at the people. You can see the front row get up from their seat, and then everyone erupted. It's something I'll always see in my mind.”

Nick Price could only see a putter. But, oh, that sound.

He was coming off the first 63 in Masters history in the third round of 1986, putting him in the final group with Greg Norman. Both were struggling midway through the back nine in a year when a half-dozen players had a chance to win. One of them was the 46-year-old Nicklaus, who took the lead with a birdie putt on the 17th.

“The cheers were going up all over the place. Honestly, the atmosphere was electric. I don’t have the superlatives to describe it,” Price said. “Norman and I were walking off 15 tee, walking past 17 green, when Jack holed that putt. We couldn’t see too well with all the people, so all we saw was the putter go up in the air. And the roar … it was deafening.”

The sound is different for eagles than birdies. Anything around the 16th hole on Sunday with the pin below the ridge can only mean a hole-in-one. And when the roars are for Nicklaus or Palmer, Woods or Mickelson, it's a different decibel.

Rory McIlroy remembers his first Masters. It was 2009, and the 19-year-old from Northern Ireland made a respectable debut. That was the year Woods and Mickelson were paired together in the final round, the undercard to another pulsating finish.

“I was coming down 15, and Tiger and Phil were coming up 7,” McIlroy said. “They went out in 30 and 33. It was my first Masters, I remember being on the back nine, the roars and cheers, they were six deep on either side.”

And then his thoughts turned to November, an autumn Masters.

“The way I see it, every hole at Augusta will be like what we experience on the 12th green,” McIlroy said. That green is some 150 yards away from the nearest spectator, most of it hidden by bunkers.

“You hole a putt, people can't see if it goes in,” he said. “Every year we experience one hole like that. But not the other 17.”