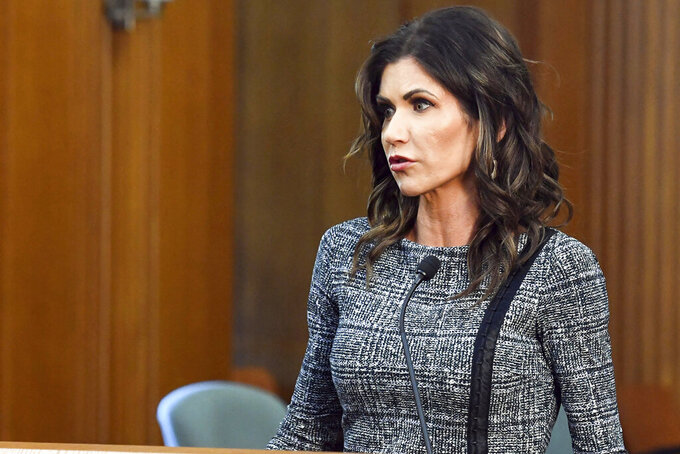 FILE- In this Tuesday, Oct. 13, 2020 file photo, South Dakota Governor Kristi Noem speaks in Sioux Falls, S.D. The largest group representing South Dakota doctors has come out in support of a statewide mask mandate as several cities have moved to require masks in public settings. Gov. Noem has opposed government-imposed mask mandates, arguing they have not been proven to halt the spread of infections. She plans to give an update on the state's coronavirus situation later Wednesday, Nov. 18, 2020. (Erin Bormett/The Argus Leader via AP)

SIOUX FALLS, S.D. (AP) — South Dakota Gov. Kristi Noem spent the weekend traveling out of state to appearances in Texas and Georgia, as she continued to build a national profile among Republicans even as her state deals with one of the nation's worst outbreak of the coronavirus.

The governor has risen to prominence for opposing lockdowns or mask mandates to slow the spread of coronavirus infections. South Dakota leads the nation over the last two weeks in COVID-19 deaths per capita and new cases per capita, according to Johns Hopkins researchers.

The state has seen a downward tick in the daily average of new cases, but one in every 68 people in South Dakota tested positive in the past two weeks, while the state has reported nearly 33 deaths per 100,000 people. The state reported 509 new cases and no deaths on Monday.

Paul TenHaken, the mayor of Sioux Falls, said he “didn't take too much comfort” in the downward trend of new cases because the positivity rate of testing has stayed high. He said hospitals in the state's largest city are still operating at a “very tense” level of COVID-19 patients.

Throughout the spring and summer, the state had maintained comparatively low numbers of virus cases and deaths. Noem welcomed large events like a July fireworks display at Mount Rushmore featuring President Donald Trump and the Sturgis motorcycle rally in August that drew over 400,000 people.

The motorcycle rally is blamed by many pandemic experts for seeding virus outbreaks across the Upper Midwest. Noem has maintained her hands-off approach even as the virus has spiraled out of control in South Dakota. She touted her leadership during the pandemic while campaigning across the country for Trump's reelection campaign, but rarely fielded direct questions from the media about the virus in her home state.

At her most recent news conference Nov. 18, Noem said that mask mandates don't help slow infections and defended those who choose not to wear masks in public. Noem is next expected to deliver a budget update to the Legislature on Tuesday that will show a big surplus. The governor has repeatedly emphasized the economic benefits of her hands-off approach.

On Friday, Noem appeared at the Wrangler National Finals Rodeo in Arlington, Texas, taking part in the opening ceremonies by carrying the American flag on horseback. On Sunday, she attended a Georgia Senate debate between Republican Sen. Kelly Loeffler and Democrat Rev. Raphael Warnock. Noem acted as a surrogate for Loeffler, fielding media questions after the debate.

The governor has also seen a windfall of contributions after campaigning for Trump. Her gubernatorial campaign even benefited from Trump's attempt to overturn the election results as she organized a fundraiser that asked for online donations to help support the president but appeared to send money to her campaign.

Noem's office has said that state funds are not used to pay for her travels, but a security detail from the Highway Patrol often accompanies the governor. The governor's office has declined a records request from The Associated Press for salary and travel costs for the security officers, saying the office does not release information “relating to security.”

Noem is considered a potential presidential candidate, though she said in July she is not interested in pursuing the 2024 nomination.