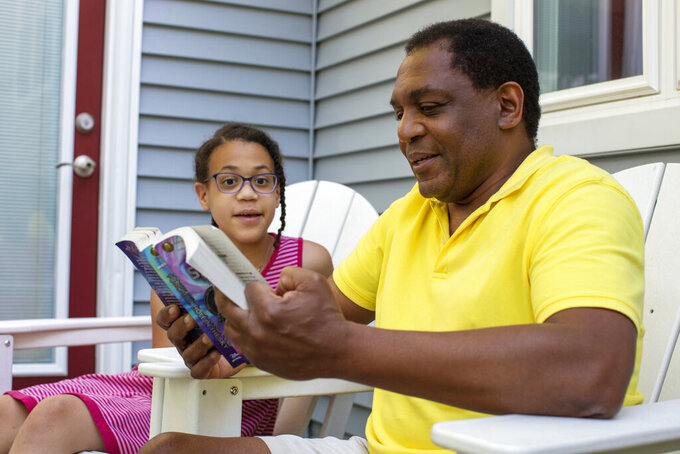 Andrew Grant-Thomas reads to his daughter, Lena Grant-Giraud, on the back porch at their home in Amherst, Mass., on Monday, May 24, 2021. Grant-Thomas and his wife, Melissa Giraud, started the nonprofit EmbraceRace in 2016 when they found few resources to help them talk with their young daughters about race. The nonprofit’s approach, Grant-Thomas says, can be summed up in a simple mantra: “Start young, and keep going.” (M. Scott Brauer/Chronicle of Philanthropy via AP)

News about the police killing of George Floyd was everywhere. Officials at the Berkeley, Calif., school, where Perfecta Oxholm’s son attended kindergarten last year, decided not to talk directly about the death with the students. That didn’t stop the children from asking questions.

Over the next year, an anti-racism group started by Oxholm delved into ways parents could answer those questions and discuss race with their children. The mother of two also turned to EmbraceRace. The Amherst, Mass., nonprofit was founded in 2016 by a couple who believe it is never too early to start conversations with children of all races about racism.

Andrew Grant-Thomas, who is Black, and Melissa Giraud, who is multiracial, started the nonprofit when they found few resources to help them talk with their young daughters about race.

The nonprofit’s approach, Grant-Thomas says, can be summed up in a simple mantra: “Start young, and keep going.”

That approach invited a gush of money from corporations and other funding groups that wanted to curb racism in the wake of Floyd’s murder. With about $3 million in new grants last year, the nonprofit’s revenues grew nearly 10-fold.

Now the founders hope the money that flowed in wasn’t a one-time occurrence. Grant-Thomas says they would like to take time and be deliberate about using the money to design programs that will have the greatest impact. He knows there is no guarantee that the surge of interest among donors will last.

“There’s this pressure to move quickly through that window of opportunity,” he says. “But some of the things we want to do actually require more thought and time.”

An initial grant of $50,000 from the Gap generated social-media attention. That helped draw larger grants from the Rite Aid Foundation, which gave $1 million, the LEGO Group, which declined to say how much it gave, and dozens of other corporate philanthropies.

Money also came from private foundations and more than 2,500 individuals.

Some philanthropies said they were attracted to EmbraceRace because it’s trying to prevent racist attitudes from forming rather than responding to the damage caused by hate.

The nonprofit produces webinars and conversation guides and shares videos of first-person stories about race. The goal is to make sure the next generation grows up with a healthy awareness of race in a world free of stigma and stereotypes in the books they read, the video games they play, and the conversations they have.

If teachers, parents, and health-care providers can initiate discussions about racial identity with children ahead of middle school, they may be able to help before negative views associated with race have begun to calcify, according to Grant-Thomas.

One of the most effective ways to equip children to deal with racism is to help them recognize it before they are victims or commit a hateful act, says Adiaha Spinks-Franklin a developmental-behavioral pediatrician at Texas Children’s Hospital in Houston.

If children are prepared and develop what she calls “cross-cultural empathy,” they are less likely to internalize racist messages that one group is superior to another, says Spinks-Franklin. She founded a group called Race and Children Education Collaborative of Anti-Racist Developmental Professionals, or Race Card, that has helped EmbraceRace develop teaching materials.

EmbraceRace has solid reason to think its approach is needed. According to research published in the journal Trends in Cognitive Sciences, children as young as age 3 can recognize race and show a tendency to attach negative associations with being Black. Part of the nonprofit’s focus in the coming months will be developing new ways to stop those negative biases.

EmbraceRace is using the money it received in 2020 to develop a plan for how it can grow well into the future. This year it wants to hire its first three staffers, who will build new programs, expand the group’s online community, conduct research, and, perhaps most important, raise additional funds.

The group has procured new software to manage its transactions with vendors and donors using 2020 grant money. Last year it nearly doubled the number of webinars it produced to 23 and began translating them into Spanish, a result of some of the new money that came in.

It is also working on a video game that introduces structural racism to young students by having them role play to learn how the impact of Covid was spread unevenly.

A key part of EmbraceRace’s approach is using storytelling to connect with children, particularly those who have been made to feel different because of their race.

The nonprofit has used some of the new money to pay storytelling trainers to help more than a dozen people share personal reflections, such as what it means to to be biracial, a descendant of people who enslaved others, or the parent of an adopted child of a different race.

The use of stories, Grant-Thomas says, is a potent way to move away from a “colorblind” approach to race, which pretends that all people are treated the same, to one that encourages rigorous conversations about racial identity.

“We use those stories as sort of a seedbed for community building,” he says.

However, as the United States moves beyond the first anniversary of Floyd’s murder, Grant-Thomas worries that much of the attention donors have paid to anti-racism efforts will not last.

About a dozen prospective donors are ready to give EmbraceRace a serious hearing, but they might not be a year from now, according to Grant-Thomas.

“Some people will probably be in it for the long haul,” he says, “but the attention is likely to ebb.”

The Rite Aid Foundation was attracted to EmbraceRace because one of the drugstore chain’s key philanthropic priorities is early-childhood development. The grant was part of a commitment to reduce inequity prompted by Floyd’s murder and the fact that people of color were harder hit by the coronavirus, says Matthew DeCamara, the foundation’s executive director.

DeCamara stopped short of promising additional money for the nonprofit. He said EmbraceRace was poised to build an effective network of anti-racist educators and parents and that Rite Aid was “committed to the journey” to reduce societal inequities.

“This isn’t just an initiative,” he says. “This is who we’ve become.”

Like Rite Aid, the LEGO Group sees its support of anti-racist work as more than a one-year grant, a time horizon favored by many corporate philanthropies that adjust their total giving from year to year based on their financial performance.

LEGO hasn’t committed to another grant, but it gave EmbraceRace more time to spend its grant money than it usually does. If the nonprofit can improve and add to the resources it shares with parents and other caregivers and make EmbraceRace show up more readily in internet searches on race and childhood, other philanthropies may take notice, according to Skip Kodak, regional president for the Americas at the LEGO Group.

“Our hope is by stepping in at this particular moment with some money that seeded additional activity, they’ll be able to build a bigger platform and therefore get on the radar screen of other benefactors,” Kodak says.

In California, Oxholm, who started the anti-racism group at her son’s school, says she has discovered that many moms and dads have no idea where to begin in speaking with their kids about race — something she could identify with from her own experience.

Oxholm says her father, who was born in Mexico, was not a full-time presence, and her mother, who is white, adopted a “colorblind” approach: Race was never discussed.

By introducing both of her sons to the concept of race in an open, positive way early on, as EmbraceRace advocates, Oxholm wants to provide them something she says her mother couldn’t give her.

“She had no language or vocabulary to use to talk to me about race,” Oxholm says. “But I needed those conversations. I needed to understand why people were treating me differently.”